Summer is here and it is a magnificent time to be a craft beer lover in Melbourne, with a bunch of tasting events over the next couple of weeks providing the opportunity to experience some amazing beers.

I am locked in to attend two such events, both are after-hours tastings in speciality beer shops (Purvis Beer and Slowbeer) and both providing equally exiting line ups and excellent value:

I believe that these tasting events may already be mostly booked out…so if you are keen to go along, check the above links for the details then get in contact with these shops asap to secure a spot.

Sticking with Slowbeer's Christmas theme...another super exciting event is Biero Bar's "A Nightmare Before Christmas" party. After their successful "Fright Night" event for Halloween, which debuted the first publicly available brew from the soon-to-open Moon Dog Brewery (an Imperial Pumpkin Stout), this next event will feature a very Christmasy brew from the Moon Dog team...an Imperial Gingerbread Brown Ale!

And for the taste of something new, Victoria's most recently opened microbrewery - Mornington Peninsula Brewery - are bring their beers up to Melbourne for a free Friday afternoon tasting at Purvis Beer on Friday 17th December, from 4:30pm. A little more info about this tasting can be found on The Crafty Pint website.

I tasted the Mornington Peninsula Porter for the first time at Biero Bar on Wednesday night ($5 pint night!) and very much enjoyed it. It is quite a straight forward porter, true to style, rich and robust without being overwhelming or too malty. It has decent hints of dark chocolate and a little something else, a spice maybe, that I found hard to place (probably due to earlier enjoying a pint of BrewDog Hardcore IPA!). 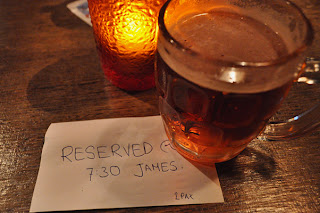