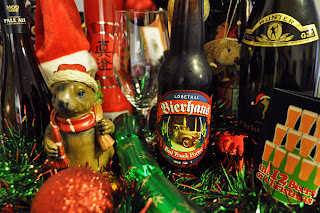 After yesterday noting that I was only aware of four "Christmas" beers produced in Australia, today I discovered that there is actually a fifth Australian Christmas ale available. Fellow good beer lover and beer writer, Chris McNamara, drew my attention to the Lobethal Bierhaus Christmas Ale, a 6% ABV beer that has "cinnamon, ginger, nutmeg and allspice added so it's like Xmas cake in a glass". That is one beer I will be super keen to try next Christmas. (Melbournians can purchase the Lobethal Bierhaus Christmas Ale from SwordsSelect Wine&Beer Stores.)

However, since it was too late for me to acquire one this week, today's review is of the Lobethal Bierhaus "Red Truck" Porter, which I had already acquired and seemed rather timely for this Porter-appropriate weather that Melbourne is currently throwing at us. It is almost like a Northern Hemisphere Christmas here (...there has even been SNOW on the Victorian Alps...in the middle of Summer!).

South Australia's Lobethal Bierhaus (Adelaide Hills Craft Brewing) was established in 2007 by former bankers, Phil Jones and Alistair Turnbull, who were seeking a lifestyle change with a move to the Adelaide region and a new career focusing on their keen interest in both wine and beer.

The brewery, with its adjoining cellar door and resturant, was previously a woollen mill. However, apparently the origin of the building has been traced back to another brewery - the Kleinschmidt Lobethal Brewery - which operated there from 1851 until the 1870s. Lobethal Bierhaus is definitely one of the breweries I am very keen to visit when we pop over to Adelaide mid-next year.

The Porter is something of an underrated style in Australia. There are a couple of excellent ones, such as the Bridge Road Brewers Robust Porter and Mornington Peninsula Brewery Porter, but many local versions tend to me rough, overcooked or just bland. Not so with Lothethal's 5.2% abv effort.

Richly dark with a slight brown hue and a generous tan head, the Lobethal Bierhaus "Red Truck" is a classic English Porter.

It has a very good nose of malt, cocoa, dark berries and some vanilla. The vanilla is there in the taste too, along with a healthy dose of cherry and plenty of well rounded dark malt that is not too roasted and hence this porter is soft and is not dry.

In the mouth Red Truck is silky smooth with a good solid body and deep texture yet medium-to-high carbonation. The finish is quite short. I only had one available, but probably could have drunk 3 of them.

Without being anything overly special, other than a well brewed and enjoyable dark ale, the Lobethal Bierhaus "Red Truck" surely fits right along side with the other top regular English Porters from Australian brewers. 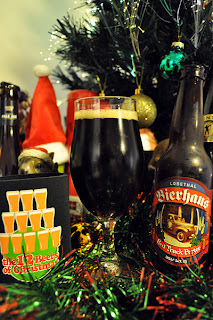 Alt Christmas Song of the Day: "December Is For Cynics" by The Matches
at 9:58 PM