I recently received a 4 pack of the newly bottled VALE/IPA via the generous PR machine at McLaren Vale Beer Company. Beer is always a welcome sight on my doorstep when returning home from long draining days at work. Most of all I appreciate the opportunity to sit at home, drink and carefully consider a new beer without the distractions of a public bar or the indecision of not buying this beer because I'm possibly in the mood for - or more interested in - something else.


VALE/IPA is not new, it has been available on tap for some time now. We first tasted it in draught form at the Court House Hotel back in June last year. The bottle release is new though...well, it was new a month and a bit ago, but I've been slack (aka really busy!).

So far McLaren Vale Beer Company have produced VALE/ALE (Australian Pale Ale), VALE/DRY (Australian Dry Lager) and VALE/DRK (American Dark Lager). Each of these Vale beers have been popular but very straightforward beers, lacking much to report back on or discuss other than "...it's a new beer". Essentially, they were very similar to many other beers available across the beer market, offering no real point of difference, "fashion claim" or excitement factor.

For a brewing company that proclaims itself as "Beer Designers" (which I interpret as a brand-centric business rather than a brewer/craft beer focused operation), there has been little in the way originality or uniqueness from the first three Vale beers. They are all well made, well rounded, session beers produced for the softer end of the "gateway" market, somewhere between mainstream lagers and approachable-ales-with-a-style that are seen as the entry point to drinking craft beer.

The Vale IPA is a little different though. This India Pale Ale has clearly distinguishable character and hop flavour to give it a unique position in a market.

Described on the bottle as an American IPA (I assume through the selection of the hops), to me VALE/IPA has the look, body, mouthfeel and drinkability of an English IPA with its dark body and creamy-like malty fullness. The noticeable difference since this beer was first released in draught form is that the bitterness has increased...and that serves this beer well.

I love it when a (craft) beer delivers on the description provided by its label. The VALE/IPA label reads that this beer gives "a firm bitterness showing passionfruit, citrus and stone fruit characters." Yes, that is all there and all works nicely for the beer.

Poured from the bottle, VALE/IPA is a deep cooper colour with a good sized white head. The nose is of a nice tropical citrus fruit hop aroma. The body is on the lighter side for an IPA whilst the carbonation sits about mid-range. The taste is hop dominated with a well balanced combination of some grapefruit, passionfruit and pine. The beer has a good length with a long but soft bitter finish, just enough to make it refreshing and sessional. 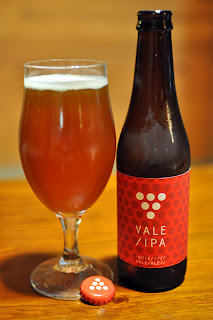 On top of the enjoyable and distinguishable flavour hit of VALE/IPA, something else is happening around this McLaren Vale beer that I had not seen happen around the other VALE beers - those in the "beer-nerd" circles that I tend to move in are more often than not giving this IPA a big thumbs up. This easy going beer, which placed 35th in The Critics' Choice: Australia's Best Beers guide this year, is finding favour with the harshest of hopheads!

I do like the packaging too. As much as I hate to admit it, packaging and labels can play a big part in my selection of a beer at the shops when looking for something new...or even for something to fit an occasion. The striking red label, definitely a unique shade as far as Australian beer labels go, suits the beer and gives it something of a trendy place on tables of bars and restaurants. It may even find a place around my home as a footy beer (Go Bombers!).

Is VALE/IPA a good beer? Yes. Is it a "gateway" beer (for those starting to develop a palate for flavoursome beer)? Definitely. The key influence that this beer has, which improves my inclination towards MVBeer, is that VALE/IPA finally provides character through a flavour, hoppiness and mouthfeel that will push drinkers further along the path of good beer discovery than just through the gateway of buying something other than a mass-produced brand-loyalist lager or pale ale sold by foreign brewing companies.

The biggest plus with VALE/IPA is that is completely trumps the need for James Squire IPA (aka "Stow Away IPA"...which was the one remaining decent beer in the James Squire national bottled range for suggesting to craft beer newbies looking for a gateway IPA). Lion Nathan should now consider their IPA a defunct product. McLaren Vale's IPA is readily available nation-wide through the Woolworths portfolio of Dan Murphy’s, BWS and Woolworths Liquor (even my little local old-school Safeway Liquor in the hills), as well as many other liquor outlets. We even saw it in Braddon Cellars in Canberra, so it should be within reach of practically everyone, which is an excellent thing for a beer like Vale's India Pale Ale. 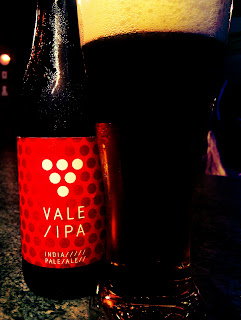 For those reading this who possess an advanced craft beer palate (aka the beer geeks), if you haven't had a chance to taste the IPA's from Mornington Peninsula Brewery yet...do yourself a flavour favour and track these down for a seriously good "MMM YES!" hit courtesy of a local craft brewer! Lush and bitter, they tick all boxes across balance, complexity, length and finish. 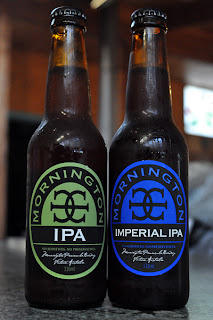