As I wrote about last year, the AFL Grand Final is an iconic event is sports-lovin' Melbourne. The vast majority of my home-town's population will have something more than a passing interest in the match this coming Saturday, which decides the Premiers of this year's professional Aussie Rules football season.

It is indeed a grand spectacle (despite the commonly awful and/or lame associated entertainment/functions/celebrations) and impels many to gather with friends and family for a lively Saturday afternoon of food, footy and frivolity. It is a day that demands good beer...for the sake of a good time!

Few gain a ticket to the actual match. Some desperate hopefuls were even lining up (camping) outside my local newsagency and ticket box-office as early as Saturday morning in hope of buying a rare AFL member tickets. The chance to watch the game in full live glory at the MCG on the big day, is far out of reach for the vast majority, afforded only to corporate specials and too many random high-fliers who go along for no other reason than it's the thing to do. blah. (Where's the fans?!?)

Then again, what's the point at being at the game when you can not enjoy good beer during the game? Most of the crowd at the MCG will have to suffer with the pungent roughness of Carlton Draught or the pointless blandness of Carlton Midstrength. Only the select few MCC Memember will be able to access some of the Matilda Bay range (not the good ones like Alpha Pale Ale or Dogbolter, but at least Big Helga and, in this case, Fat Yak).

Anyway...the next best thing, the regular thing for many of us, is to gather with a crowd of fellow footy fans and create your own awesome atmosphere at a pub or someone's backyard/lounge room.

Last year we spent Grand Final Day at Mrs Parmas, which had an excellent festive atmosphere (despite the audio problems early on followed by the shock result of a draw). You can't beat a room full of fans and a bar pouring pint after pint of flavoursome local microbrewed beer!

So, once again, if you are looking for a bar around Melbourne to watch the Grand Final match with an atmospheric bunch of randoms plus the bonus of excellent craft beer, here are a few options for this Saturday:

Grand Final day at Mrs Parmas has become a popular tradition for many who want to be near the MCG but can't get inside. They turn most of their taps over to beers from Grand Ridge Brewery, which are available for "happy hour" prices.

Alternatively...if you are more inclined to just do your own thing - stay at home or visit a mate's place and fire up the BBQ - then treat yourself to fresh draught craft beer by filling up a growler or two! There's now a bundle of shops and breweries around Victoria that are offering growler fills. To find one near you, check out the list of Growler Filling Stations on The Crafty Pint website.

Personally, this year I'll be taking this final option and staying home with a sweet stash of good beer, maybe with one/two/three of my four growlers filled with something special. I really care not for either of the teams playing in the Grand Final this year...and will only watch sparingly in hope to see Collingwood lose (oh, and I have a pile of packing to get done). 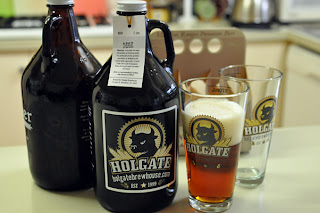 First up, however, it's Brownlow Night tonight. Watching the often boring 3.5hour telecast of the Brownlow Medal count over a few drinks is also another tradition for many (...who knows why!).

The telecast is synonymous with drinking games. There are so many potential categories to score a *DRINK* on during the Brownlow. I may have a horror story or two to tell from previous years...involving shots of scotch whenever an Essendon player scored 3 votes in a round...

No such silliness from me tonight though...need to be responsible so that I am sprightly for work tomorrow. Instead, we shall "enjoy" Brownlow viewing over a roast dinner and several Brown Ales, including the Holgate Brewhouse Nut Brown Ale (which we filled our Holgate growler with yesterday whilst at the brewery for lunch), Beer Here "Kama Citra" Brown Ale and the 2 Brothers JAMES Belgian BROWN (mmm dessert). Cheers! 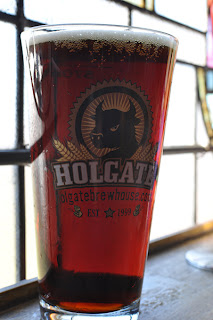 Beer - Father's Day - You may as well buy him plain socks

Around here, the latest bus stop poster advertisements from liquor superstore Dan Murphy's suggest that you "Buy Dad what he really wants" for Father's Day...and displays a bottle and full glass of Coopers 62.

Such a gift is bland, uninteresting and cheap in terms of both product and meaning/thought! Is that how you thank your dad? You may as well be a disappointing cliché and gift him some socks.

Ok, so some people don't have the best relationship with the parentals, Yes, maybe grey socks or a stinky yellow liquid is appropriate.

For those who wish to acknowledge and celebrate their father for the journey of life, how about you give Dad some local craft beer!

The journey that one can discover in the diverse styles and characteristics of craft beer can be a nice analogy for the journey of life. (sorry, was that too wanky?)

If your Dad enjoys the Cooper's 62 style, here are some suggestions of comparative craft beer drops that will help separated your gift giving prowess from the mundane masses whilst supporting small and worth Aussie businesses:


These beers are not hard to find around Victoria these days. Several of them are stocked readily by the big beer warehouses (Dan Murphys, 1st Choice) as well as Vintage Cellars and Cellarbrations.

Alternatively, just visit one of the bottle shops listed on The Crafty Pint's website at: http://craftypint.com/beer/bottleshops/

Material gifts are good for some, but experiences live forever. The last time I tasted Coopers 62 it was experienceless, unlike every time I try a new craft beer.

In today's flourishing market, there is always another beer worth trying! Does Dad know that yet...
at 4:44 PM 1 comment: