Last Friday night the wife and I found ourselves in the rare (for us) position of being on the west side of the city, so we took advantage of the situation and finally made our first visit to Melbourne's newest specialty beer bar, Biero Bar.

We wandered in a little before 9pm to a jam packed and bustling bar, taking a moment to get our Biero bearings and decide on our first drinks for the evening.

The interior of bar is beautiful. Lit by candles, with exposed brick walls and the now famous beer vaults commanding your attention. Overall, the design and decoration of Biero Bar is cosy and commendable. 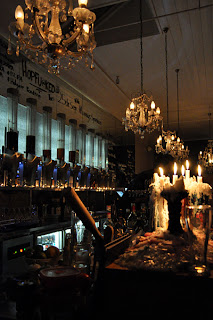 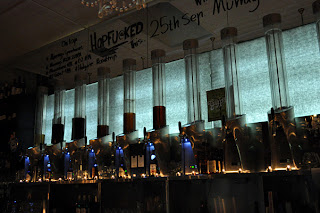 Unfortunately, the biggest disappointment for me at Biero Bar was the unavailability of listed tap beers. Biero uses their massive mirrored wall to display the beers currently available on tap. The list included the 2Bothers "James Brown" Belgian Strong Ale and the Murray's Brewing "Angry Man" Brown Ale. Since part of the reason we were actually there was to try the James Brown, our mood was somewhat soured when we discovered the neither of these beers were actually available. Bummer!

Nonetheless, I was still able to enjoy an untried beer in the Murray's Brewing "Dark Knight" Porter, whilst my wife savoured the Red Hill Brewery Weizenbock on tap. 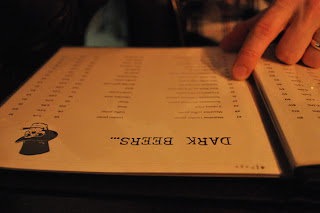 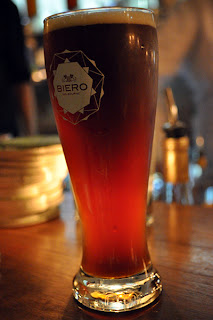 Just like in the bottle, the Red Hill Brewery Weizenbock is a sweet joy on tap!
I think we were simply in Biero Bar at the wrong time for our "quiet style".  We shouldn't have been surprised, given it was a Friday night leading into a big weekend...when you would expect such a drunken crowd to dominate. But the squash and noise in the bar, as well as the lack of a quiet corner to retreat to, made it difficult to sip and enjoy some good beers. Further, with limited beers actually available on tap and the beer menu throwing up few surprises from me, I felt somewhat underwhelmed, possibly lacking the understanding of how to actually navigate the bar and order something genuinely exciting. Therefore, we decided to move on after just one beer to continue our hunt for the 2Bothers "James Brown" Belgian Strong Ale.

But I'll be back there at some stage - preferably earlier in the day before the crowd hits - to learn more about Biero....because it certainly has plenty of potential.

Our next move was to wander to the other end of the city to visit Beer Deluxe in hope of finding the James Brown on tap. No luck again, however the Murray's Brewing "Angry Man" Brown Ale was in plentiful supply, so we enjoyed a glass each of this malty Brown with plenty of flavour.

The final step in our now-official-mission of the night to drink some 2Brothers James Brown was to poke our head in the door of The Royston Hotel. However, a quick glance as the tap beer list (which did not include James Brown) led us to quickly jump across the road to catch the Mountain Goat Brewery's Goat Bar offerings before closing time...and we were rewarded with their Surefoot Stout randied through coffee beers (our second experience of this sexy coffee'd stout). Gorgeous! 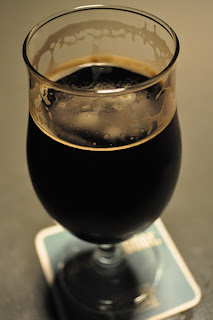 The Mountain Goat Surefoot Stout with added coffee thanks to Randy, their Randall infuser! 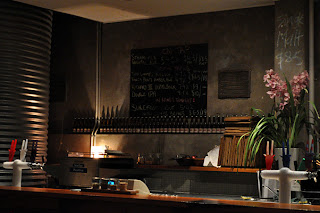 No shortage of brilliant beers and free bar space at The Goat Bar after 11pm on a Friday night! 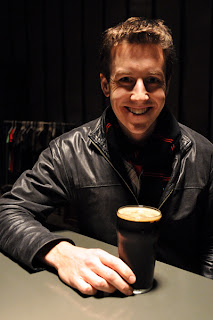 The joy of this brew called for a PINT!
On Saturday, AFL Grand Final game day, we made our way into the city for lunch and festivities at Mrs Parma's.

Mrs Parma's was a simply sensational choice for watching the Grand Final, helped by the majority of the day's patronage very much supporting St Kilda (or at least, barracking against Collingwood). The main bar area was arranged well with tables to allow those who had booked a place for the event to enjoy an excellent view of their quality big screen. There was a minor glitch with the sound at first (in case you didn't know - digital tv and radio has a 7 second processing delay, so you can not watch live digital tv whilst listening to an analogue radio commentary broadcast and vice-versa), but that was eventually rectified and the ample supply of excellent Victorian craft beer counteracted the distraction. 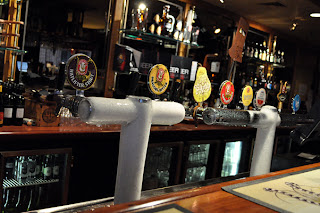 As mentioned in previous posts, the Grand Ridge Brewery beers were being showcased on tap for this Mrs Parma's Grand Final Day event, and we drank several, including the Draught Lager, "Gippsland Gold" Pale Ale and "Hat Lifter" Stout. However, it was the Tooborac Hotel's "Woodcutter" Amber Ale that proved the top pick for us.

The Grand Ridge beers where still a bit so-so, as always for me. However, I quite enjoyed the Hat Lifter Stout on tap, as I had not tried the draught version before. Still very similar to the bottled version, I think on tap the Hat Lifter has a slightly richer dark chocolate taste. 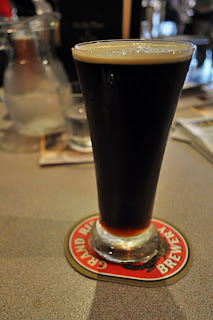 After the game ended - finishing with a remarkable draw that left everyone somewhat dumbfounded - we sort solace in a super hop hit by wandering down to Federation Square to drink the new Murray's Brewing "Spartacus" Imperial IPA, on tap at Beer DeLuxe.

The mood at Beer DeLuxe was somber, as Melbourne came to grips with the Grand Final draw confusion. However, everyone was making very good use of the fine beer selection to find an answer to the question of "what next?".

My notepad came out for some tasting notes of the Spartacus

Served into a plastic cup (not the norm at Beer DeLuxe, but required by liquor licencing law on this day because of the potential for very large crowds and celebrations...which would not eventuate on this occasion), the Spartacus shone with a cloudy golden-amber and a decent bubbly white head (common to many of Murray's beers). The aroma was all wonderful floral hops, provided by the Riwaka and Motueka hops which were jam packed into the brew. The taste was massively hoppy with plenty of sweetness too, providing a clear passionfruit flavour. In the mouth it is light and has high carbonation, yet possesses a very solid body. Excellent! The 10% alc/vol is remarkably well hidden. 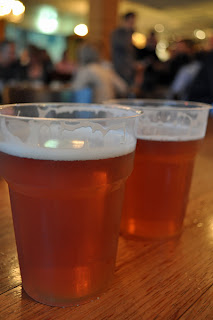 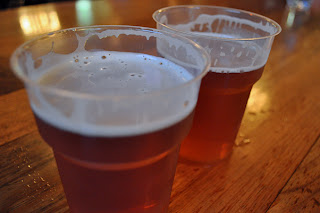 A very drinkable Imperial IPA, especially as I was easily able to put away two, even after a day of enjoying numerous various beers. The Spartacus is a brilliant beer. I highly recommend given it a try!

On Sunday the weekend was wrapped up with a quiet evening drinking a couple of Aussie craft beers, which was dominated by a couple of bottles (bought at Duncans Church St Cellars in Richmond) the latest Rare Breed release from Mountain Goat - the magnificent Double Hightail.

There was also the Arctic Fox American Pale Ale (thanks to a sample back from The Beer Boys), which is very similar in style to the Little Creatures Pale Ale and provided a very nice appearance with a decent hoppy aroma. However, the taste lacked any real depth and the beer is completely let down by the ZERO finish! The taste is pretty much gone as soon as your taste it. Strange.

Finally, I also consumed a 4 pack of Feral Brewing Hop Hog IPA (bought from Slowbeer), which has just made its way to Victoria in bottles for the first time. I have heard much praise for this beer so I was very keen to try it...and the Hop Hog did not disappoint. However, I suspect it would perform better on tap. Therefore, at some stage I'll make my way to The Great Northern Hotel in Carlton, which lays claim to being the only venue in Victoria offering a constant supply of the Hop Hog on tap. 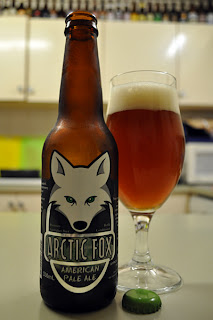 The Arctic Fox APA has an excellent appearance and aroma, but simply lacks any depth or length. 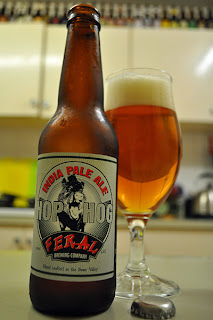 The Feral Hop Hog IPA is very drinkable and has a refreshing bitterness.
at 11:25 AM