Here is a post dedicated to two local businesses, currently celebrating anniversaries, which are doing great things for craft beer in Victoria.

Specialty beer retail shop, Slowbeer, opened one year ago and have been sharing the beer love over the last week with a 1st Birthday discount on all purchases.

Located in Hawthorn, store owners Chris and Stewart are both very passionate and richly knowledgeable about the world of beer.

The cosy size of the shop may limit the stock readily available at arms length, but the shelves are always full and the range is extensive, as well as regularly changing, pretty much guaranteeing that you will always find something you have not tasted before.

And the shop is ALL BEER (with a couple of ciders from local producers). You will find no space or pseudo-expertise wasted by wine or spirits. Furthermore, if you are looking for any form of major commercial macro brewery beers...there is an Dan Murphy's 1km down the road, if you must, because you will not find any in Slowbeer.

One side of the shop is dedicated to Australian craft beers and the other side showcases international beers, including a section specifically for our neighbourly New Zealand's craft beers. A fridge also provides a small supply of chilled bottles ready to drink.

Other than being conveniently located close-ish to my home (within 5 minutes by car or a 25 minute walk), the aspect of Slowbeer that I most appreciate is their complete lack of "salesmen-bullshit-talk". The Slowbeer staff won't try and sell you a beer or talk up something they don't believe in. Instead, they will help guide you to a style/brewery/region or specific beer that might match your likes, to help you explore the world of craft and boutique beers. A gentle "can I help you with anything" is often offer up, but just browsing is fine, as you will never be made to feel that you must hurry along or empty your wallet.

Co-owner (and the most common sight behind the counter) Chris is not afraid to talk down aspects/characteristics of a beer, which is awfully refreshing in the retail industry. However, he will readily agree that there is no beer that is not worth at least trying.

Whilst you will not find a bad beer in the Slowbeer shop, there are certainly some products that are better than others and everyone has different preferred tastes and styles...and the expensive ones are not always the best ones. Therefore, you will find them very accommodating to your own beer journey, whether your new to craft beer or a well seasoned and traveled consumer. 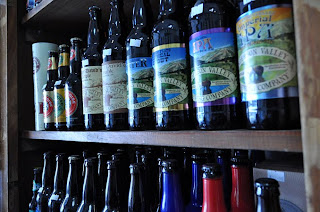 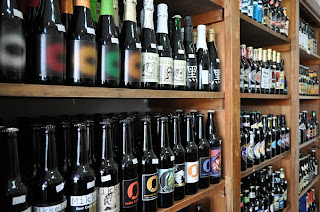 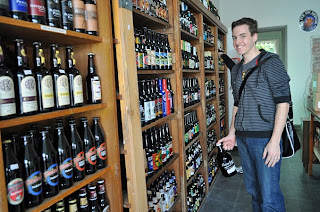 I can spend endless amounts of time circling the little shop. With such a delicious range, the decisions are never easy! 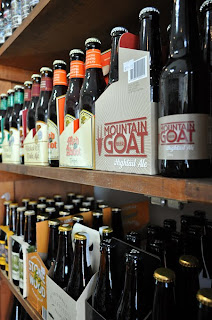 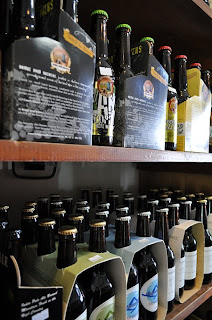 More Victorians, including Bridge Road Brewers and Hargreaves Hill Brewing Company
Slowbeer also has an excellent online presence, effectively using an newsletter-blog, Twitter, Facebook and their website (which is somewhat dated and clunky, but I hear a new improved website is on the way) to keep everyone up to date with their stock, tasting notes, events...and all you need to know about the shop.

Occasionally on Friday afternoons (normally between 5pm-7pm), Slowbeer will have free/open tastings available from a particular Brewery. They have been a little rare lately, but are likely to pick up once again as Summer approaches. Keep an eye on their blog for details.

And finally, Slowbeer has growlers! I blogged about the slowbeer2go growlers concept a little while back, so I won't revisit it on in this blog. However, I will mention that, two months on, the Slowbeer growlers have proven to be a sensation! Beers from Mikkeller, BrewDog and Dieu Du Ciel have all performed wonderfully in the growlers and really opened up a new channel for exploring good beer.

To read more, check out this recent article from The AGE newspaper: "Takeaway draught — what next?" by James Smith, The AGE Epicure, August 3, 2010.

Tying in nicely to the next part of this blog...last week's Slowbeer growler offering was the new anniversary ale from Bridge Road Brewers.

Head Brewer Ben Kraus has produced an impressive new beer in the form of a Black Belgian IPA that he has named B2 Bomber (excellent name!), which is now available in 750ml bottles (for about $30) or can be found on tap at the Bridge Road Brewery, as well as a number of Victorian beer bars (check out the Crafty Pint website for locations).

Following on from last year's Oak Aged Imperial Porter, brewed to celebrate their 4th Anniversary, this new anniversary ale is one of the best beers from Australia that I've tasted, primarily due to its rich complexity and uniqueness amongst this country's craft beer industry. Most of all...despite being a big bold dark Belgian beer...it is super drinkable.

The B2 Bomber was born through some in-house experimentation at the Bridge Road Brewery, blending their 2009 Galaxy (Single-hop IPA) with their regular Robust Porter. Finding potential in the result, Ben continued the development of this special brew by introducing a Belgian yeast, providing a novel combination of malt, hops and yeasty esters.

Poured from my Slowbeer growler into a glass (I was away-from-home, so no specialty beer glass on this occasion), the B2 Bomber was beautifully dark with an excellent big espresso-coloured head, which retained very nicely after settling down to a solid centimeter.

The aroma was strong and gorgeous, it yelled "good beer!", especially due to the hop presences in such a dark beer, combined with lovely roasted malts, delicious chocolate, hints of coffee and plenty of fruity notes.

In the mouth this beer tasted and felt just right. Big and bold but not aggressive, with a full body and medium carbonation.

The complex taste very much continues straight on from the aroma - rich roasted malts, chocolate and dark fruits. There is plenty of flavour and character to explore and savour (...which I'm not educated enough to interpret fully).

The 8.5% abv is fantastically balanced, warming but hardly noticeable in the taste. The finish is long and dry without being harsh. On finishing, I was instantly ready for another glass. Yum!

I may be talking the B2 Bomber up too much (?)...but I suspect that my delight in this beer is simply because drinking it was really a novel sensation. Rather than just another version of a tried-and-true style or a beefed-up "Imperial", it is something new. I honestly did not expect this "combination beer" to work so brilliantly, but my lack of faith has been shown the door, as I was left completely satisfied (and wanting more).

There is only one way this beer can be improved...and that's by making more of it! 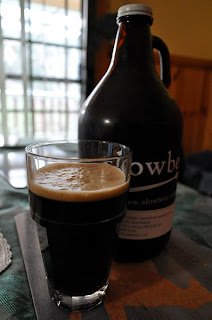 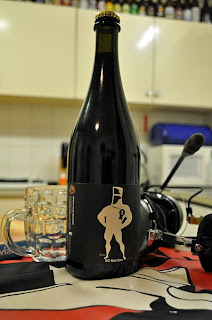 I enjoyed this beer so much that I returned to Slowbeer and purchased the bottled version as well, which I may cellar to see how it performs over time.

Read more about the B2 Bomber on Australian Brews News at: http://www.brewsnews.com.au/2010/08/bombers-over-beechworth/
at 3:25 PM