Tomorrow, December 14, will mark twelve days to Christmas. I thought I'd take this opportunity to blog here a beer each day - the 12 Beers of Christmas - primarily focusing on Australian craft beers...but with a couple of awesome, impressive, unusual or "Christmasy" international beers also thrown in (because during this time I'll be attending a couple of special beer events where I'll only be drinking such beers).

I do realise that the more traditional types will insist that the "12 Days of Christmas" actually start on Christmas day...and then count 12 days up to January 6th (yes, I've read the wikipedia entry), but for the sake of this little blog stunt...I'm following the modern populist US concept...leading into and including Christmas Day.

Each blog will only be short, hopefully sweet and probably photo-centric. I'll aim to be blogging beers that I have not mentioned here before.

And no...they will not be all Christmas ales. As much as I'd love to run with only "Christmas" beers, there are only about three local beers labeled as Christmas ales (see the pic below)...and the many international Christmas brews are generally too expensive or hard to get.

I'd love for anyone and everyone to join me with blogging or at least tweeting a craft beer a day up until Christmas. If you do...tag it with #12beersofxmas 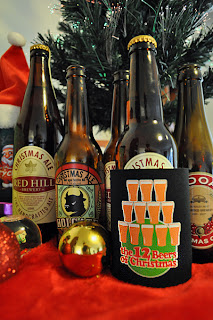