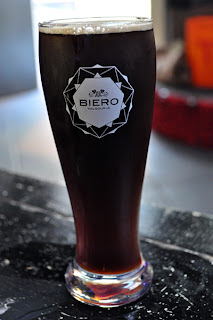 Today, their second beer hit the Biero Bar taps...and it is a MONSTER! Brewed specifically for tonight's "Nightmare Before Christmas Party" event, this Christmas-themed brew - a Gingerbread Imperial Brown Ale - used 11ish kilos of home made gingerbread and possess a huge 12% ABV (give or take 0.7%)!

If memory serves me correct, Bar Manager at Biero - Ray Kent - baked 26 kilos of his grandma's special homemade gingerbread recipe for the 50L batch of this beer. 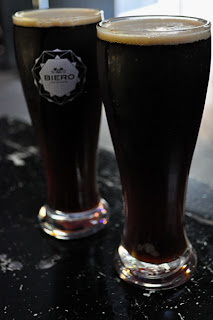 And wow...this makes 2 from 2 on the scoreboard of FREAKIN' AWESOME beers from Moon Dog Brewing!

Lush, deep dark brown in appearance with a small tan head, this beer looks...enticing! The robust aroma is sugary sweet with a clear hit of gingerbread and something a little malty choc-banana.

The taste provides a serious punch of gingerbread (it is indeed like having a mouthful of liquid gingerbread!), dominated by a big molasses hit and followed by some malty butter. To me, on first taste it was like drinking crushed up dark-liquor-chocolates in a beer! This beer has an excellent full body without being thick and the medium carbonation was perfectly suited.

Fantastically, the 12ish% alcohol was no where to be seen in the flavour and texture of this beer! Even with the extremely high sweetness factor, a blind tasting could have you believing that this was merely a 6%-7% ABV beer. Although, the alcoholic effects of it are quickly evident. Two pots of the Moon Dog Gingerbread Imperial Brown Ale...and that was all I needed, as it was quite clear that I was well sauced from sipping down this amazingly unique beer. Nonetheless, two pots of this is all you need to be fully satisfied.

With a long lingering finish...overall it was just brilliant in an almost wrong kind of way. A true gingerbread experience and a brilliant dessert beer for Christmas!

I have never been more beer-nerdy excited about the arrival of a new local brewery. After several chats with Moon Dog's Josh Uljans, Jake Uljans and Karl van Buuren it is fantastically clear that they are some switched-on blokes with a seriously cheeky twist and a deliciously irreverent brewing philosophy.

With their obsession for big beers, you can expect the Moon Dog team to seriously mess things up (in the best way possible!) with some out-there, challenging beers...once they begin full time production in early 2011.

Just check out their tag line - "quality beer from Abbotsford..." - which I'd say refers to the fact that the only other beers coming out of Abbotsford are the (quality-less) Carlton and United Breweries (CUB) beers.

WELL DONE MOON DOG...you have brewed us another quality WOW beer that will be the talk the town for many Christmases to come! 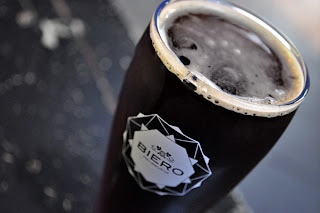 Another brilliant beer night at Biero Bar. Unfortunately it had to end too soon for me...as I have to get up early and work on Christmas Eve. 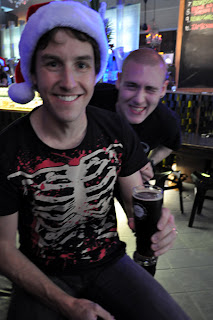 Alt Christmas Song of the Day: "Mr Hankey The Christmas Poo" from South Park
at 12:47 AM