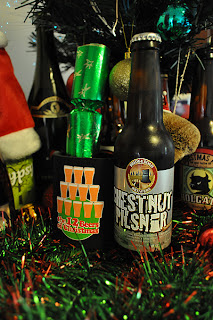 According to Wikipedia, "The Christmas Song" (aka "Chestnuts Roasting on an Open Fire") was written during a blistering hot American summer by Mel Tormé and Bob Wells in an effort to "stay cool by thinking cool".

Therefore, considering we are heading for a warm Christmas Day here in Melbourne (for once!)...the Chestnut connection has some validity in my 12 Beers of Xmas posts...I think?!? Not that we will be roasting any over a fire...but here is a way to at least enjoy the Chestnut element via a Summer appropriate Australian craft beer - the Bridge Road Brewers Chestnut Pilsner - a beer that is definitely best enjoyed cold.

Originally released as a "Chestnut Lager" for an Autumn seasonal, this beer was sidelined due to the lagering time and space required, which was beyond the capacity of this microbrewery's extensive regular range.

However, this year Bridge Road Brewers received an $18,800 Grant from the Victorian Government through the "Food Industry for a Sustainable Tomorrow" Innovation Initiative, which aims to grow regional development by supporting innovative and enterprising agricultural projects. This allowed Ben Kraus and co at the Beechworth microbrewery to install 3 more 2.4 hectolitre tanks and another Brite tank, providing the capacity to brew a Chestnut beer all year round. With the some tweeking of the Lager recipe (more chestnuts, different yeast strain, altered salts and hops) the beer was relaunched this year as a Czech Pilsner.

The brewers add locally grown chestnuts to the mash, using chestnuts sourced from Victoria's Beechworth region, the home of Bridge Road Brewers. Further, the Galaxy hops used in the brew are also grown close by at the Rostrevor Hop Garden. Hence, it is very much a unique Australian beer.

(Apparently, there are only two other commercially available chestnut beers in the world – from Corsica and Italy.)

Pouring the Chestnut Pilsner into a tall glass, its colour is a cloudy straw-like yellow-brown, maybe somewhat browner than most Czech Pilsner, with a small white head that reduces quickly with little lacing.

The aroma is very much the classic Pilsner smell of citrusy hops (the recognisable Galaxy hops), some thin grassy pine and a little spice.

On first taste the nutty character is actually very evident and a great twist to drinking a Pilsner, but it passes quite quickly. I am not a fan of many Pilsners, but the underrated Chestnut flavour in this beer makes it a much more interesting and well rounded over the commonly sharp and thin characters of many Pilsners. Whilst this beer is readily open to be rated as a fairly pedestrian Pilsner on terms of taste and texture, the innovation of using chestnuts in this beer is a local masterstroke in the craft of making good beer.

The body is medium-to-light and carbonation is also medium, so the mouth feel is very good. Definitely an easy drinking beer.

Right here and now...this is a perfect example of the right time and place for a beer. I probably would not be so complimentary of this beer on an average day or in comparison to some of the highly regarded international Pilsners. However, on a warm and sunny Christmas Eve, with the temperature and weather appropriate Pilsner combined with the festive Christmas character of the Chestnut and the overall "Australianess" of the product, the Bridge Road Brewers Chestnut Pilsner fits perfectly! 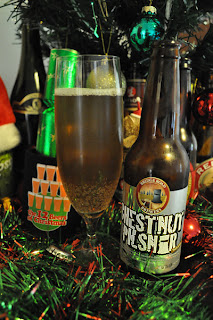 Alt Christmas Song of the Day: "Spend Christmas Day With Me" by Darren Hanlon
at 8:46 PM