On the third day of Christmas, my true love gave to me...a Moo Brew Pale Ale... 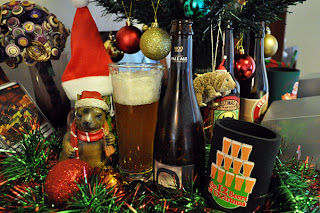 Recently, I have been learning an important lesson in beer appreciation - never disregard a beer completely if you don't like it at first.

I am discovering how revisiting a beer is a worthwhile exercise, as your palate evolves and the brews vary. Beer produced by microbreweries will often change slightly from year to year (or batch to batch) as the brewers rework or improve their formulas and the breweries mature. Further, some bigger and more complex beers just need time to condition or mellow...and sometimes a beer will just suit different social circumstances, places or weather conditions.

Therefore, if you do not instantly enjoy a craft beer on your first taste, but can at least see it has some quality or potential (which you would really expect from any true craft microbrewery with passionate brewers), give it a another chance later. Come back to that beer next year or under different circumstances and see how it works for you with a second taste and more experience palate. This has been my experience over recent months, including with the Moo Brew Pale Ale.

When I first tried the Moo Brew Pale Ale (from the bottle) a while back, I did not think too much of it. However, that was early in my beer-discovery journey, before my beer palate had really developed and before I really knew beer.

Last month I tried this beer again, this time on tap and over dinner (Clifton Hill's Terminus Hotel, which has just been named the 3AW De Bortoli Pub of the Year 2010) and really enjoyed it, as a very drinkable and characterful pale ale.

The Moo Brew beers are brewed at a microbrewery on the Moorilla Estate Winery, near Hobart, Tasmania. In beery circles, Moo Brew is best known for the Vintage Releases of their Imperial Stout, which I am yet to have the pleasure of experiencing. However, I did have one of my best "beer moments" this year when I drank this year's batch of Moo Brew Imperial Stout on tap at Beer DeLuxe back in May.

This is an American Pale Ale in style, but is a little lighter in appearance and texture and not as hop heavy as the more popular or well known local craft APAs, such as the Little Creatures Pale Ale, Matilda Bay Alpha Pale Ale or the Kooinda Pale Ale.

From the bottle the Moo Brew Pale Ale is a light hazy yellow in appearance, with a fluffy white head.

The healthy aroma is floral and citrusy, showing off the classic hoppiness found in the local American Pale Ales.

The taste is a little bit of a hurdle for me, soft but dominated by an orange flavour that brings on bitterness a little too early. Also, overall it seems a little unbalanced in terms of flavours. Nonetheless, it is has a great medium body and is plenty drinkable, potentially even sessionable, even with a fairly short finish for an APA. 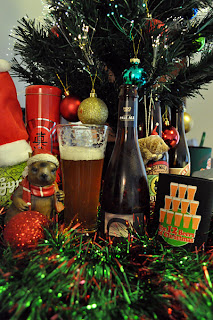 The biggest problem with the Moo Brew range of beers is their retail price. The 330ml bottles cost around $7 or more at most outlets that I have seen stocking them. Therefore, it may be best to find a Moo Brew on tap at a bar where it will generally be available for the regular tap beer price.

Alt Christmas Song of the Day: "Merry Christmas (I Don't Wanna Fight Tonight)" by The Ramones.
at 8:28 PM