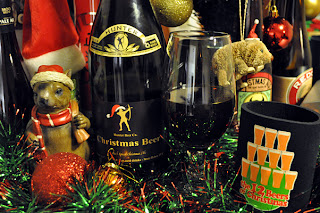 I am aware of just four Australian breweries that produce and bottle a "Christmas" beer...and before tonight I had tired three of these: the Red Hill Brewery Christmas Ale, Redoak Christmas Cheer and the Holgate Brewhouse Christmas Ale (which has now been retired and replaced with Beelzebub's Jewels).

Tonight, I had the opportunity to taste the fourth member of Australia's Christmas beer establishment...the Hunter Beer Co Christmas Beer, thanks to the brilliant "Jolly Christmas Tasting" event at Slowbeer.

The Hunter Beer Company is a boutique microbrewery located at the Potter's Hotel, Brewery & Resort in the NSW Hunter Valley. Originally known simply as "Potters Brewery", but now brewing under the "Hunter Beer Co" label, they produce a number of small batch beers, all in 750ml bottles, with very few making it to the retail shelves in Melbourne. Their regular range consist of a Lager, Kolsch, Pale Ale, Wit Bier, Bock and a Ginger Beer. Hunter also produces a couple of seasonals, such as this Christmas ale. 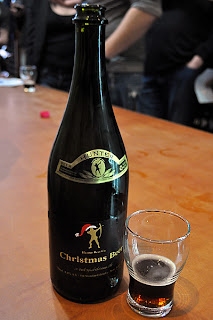 Dark golden-brown in colour, the Hunter Christmas Beer is reasonably clear in appearance and possesses quite a decent white head for a "dark spiced Christmas ale" (as the bottle describes it). The head reduces very quickly, leaving a lovely looking beer that would sit nicely alongside your Christmas Day dessert.

The aroma is a slightly restrained chocolaty and spicy mix that alludes to a genuine quality brew.

The taste is beautifully dominated by chocolate, dark fruits and some spice that nicely rounds off the flavour. Despite the strong chocolate character, this beer is not thick or bitter, yet has an excellent length.

In the mouth it is not as rich or bold as most Belgian style Christmas ales. However, I found it to be an excellent Australian interpretation of the style.

The 8.4% is remarkably well balanced/hidden, yet overall the beer is comfortably warming. The actual warming effect comes quite late, making the beer plenty drinkable.

Even though I had fairly high expectations for Hunter Christmas Beer...it was surprisingly good overall! (In perspective...the only beer I had previously drunk from this brewer was their Hunter Chocolate Porter, which won Champion Porter and a Gold Medal at the 2010 AIBA, but I was somewhat underwhelmed by the chocolate element and overall texture of it.)

In terms of unique Australian craft beers...this is a beer worth tracking down and tasting during the Christmas season, matched with chocolate or a fruit-cake dessert. 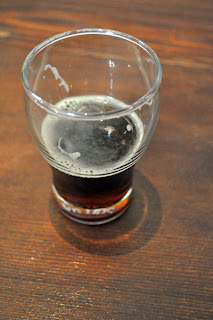 I must also relay a huge THANK YOU to Slowbeer for another magnificent Tasting event. Yet again, tonight's Tasting provided access and insight to a fantastic range of themed beers within a well constructed session that catered to all levels of beer drinkers. CHEERS!