On the ninth day of Christmas, my true love gave to me...a Beard and Brau "Golden Paw" Pale Ale... 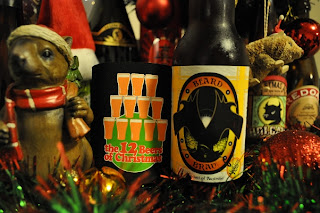 Established in 2008 by Chris Herring and Tanya Harlow, South Australia's Beard and Brau microbrewery has two regular offerings, which starting hitting Victorian retails shelves last year. Along with this Golden Paw, there is also the "Red Tail" Amber Ale, which I had a little while back and found perfectly drinkable but a bit uninspiring. They also have some seasonal specials (both of which I am yet to drink) - the "Black Snout" Milk Stout (retails in 750ml bottles) and "Bon Chiens" Farmhouse Ale.

Along with the usual microbrewery/craft beer weasel words of "all natural" and "handcrafted" for their beers, Beard and Brau describes the Golden Paw as a 'Steam Ale, American Pale Ale fermented with Lager yeast at Ale temperatures', which I believe many will classify as a "California Common" style...similar to that of the Mountain Goat Steam Ale (...I think?).

I also note that it seems the Beard and Brau labels have changed at some time...so I'm not sure if this bottle that I have tonight is from an old or new batch. I suspect old...because I think their labels now look like that which you see on the bottle images on their website. Therefore, I hope it is not too old.

The Golden Paw has a cloudy golden-brown appearance and pours from the bottle with a huge bubbly head, which provides plenty of fluffy slippery lacing.

The aroma is grassy with a fairly strong pineapple hit, maybe some mango and peach type fruits too.

The flavour is big but not as balanced as hoped (as I suspect it as mellowed too much through age...not being the freshest of bottles). Full of tropical fruits, some hoppy bitterness and something a bit yeasty. It is one of those beers that improves its drinkability the more you have of it.

The carbonation is high and probably a bit too much. The finish is dry with an ok length and bitterness.

Overall, the Golden Paw is a promising beer that does not quite get there for me. Maybe I'm making unfair comparisons to the more refreshing and cleansing Mountain Goat Steam Ale...but this Steam Ale from Beard and Brau is at least worth trying...because it may work for you! I will revisit it because I'd like to try it on tap some time, on a hot day. 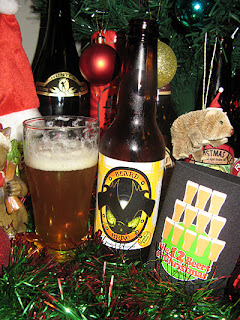 There days left until Christmas(!)...and the beers are about to get uber exciting. I may not get a 12 Beers of Xmas post up in time for tomorrow because I will be at the Biero Bar "Night Before Christmas" party, which will feature an 11% abv Imperial Gingerbread Brown Ale from Moon Bog Brewery...yikes!  Also on tap will be Southern Tier Double IPA, Renaissance MPA and Craftman’s Chocolate Stout, Timmerman’s Kriek and the Holgate Temptress Chocolate Porter. As an added bonus, after 11pm all pints will be just $5...!! Yes, it is going to be brilliant! Hope to see you there!

I promising 3 more posts will eventually be published by Boxing Day. Cheers!

Alt Christmas Song of the Day: "Father Christmas" by The Kinks
at 10:46 PM