On the first day of Christmas, my true love gave to me...a 2 Brothers "Gypsy" Pear Cider... 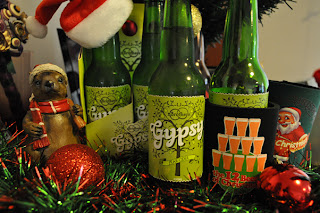 ...ok...DON'T HURT ME! I do realise that this is NOT BEER...yes, sorry! But I really wanted an allusion to the Twelve Days of Christmas English Christmas carol and its Partridge in a Pear Tree.

Since I am not aware of any Pear or Partridge beers, I decided to start with a perry...and at least it is from a local microbrewery who are producing some generally marvelous and different craft beers.

Ultimately, I am all about supporting our local independent industry...and I just love a good bit of lameness (remember that Pear Tree?)!

2 Brothers Brewery was established by brothers, Andrew and David Ong, in 2007. Their pear cider was inspired by one they enjoyed in a London pub and was originally intended to be just a Summer seasonal. However, when Gypsy was released last December it really took off, finding much favour with a diverse audience drinkers.

Now available and popular (with both men and women) on tap at many Victorian pubs and bars, as well as in bottle through many bottleshops, Gypsy has very much contributed to the revival in cider beverages over the last 12 months, which has seen many beer outlets, especially the giant liquor retails such as Dan Murphys and 1st Choice, dedicate whole sections of their stores to cider products that were previously few and far between.

Brewed with combination of Bartlett and Packham pears, Andrew Ong has said that a secret yeast is a the key to this cider. "I am loath to tell anyone because it took a lot of time and effort to work out how to make a sweet perry properly. We stop the fermentation short to keep the fructose in, rather than adding anything to sweeten it up." (from Cider nous rules by Willie Simpson, The AGE 14/09/2010)

To drink...Gypsy is soft, sweet (but not overwhelmingly sweet for a cider) and dry. Despite the high carbonation, it is very easy to drink and with a short finish...it is ultimately refreshing.

I think this cider works much better on tap, in terms of drinkability. Some of the pear flavour seems to be lost in the bottled version. In a blind taste test it may almost be confused for a good fruity white wine. 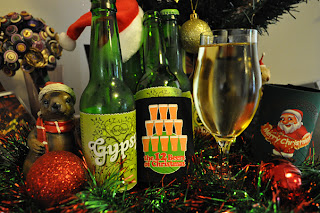 If you are looking for a quality crisp and refreshing alternative to beer on a hot day, I recommend Gypsy...(even if only to support our local craft brewers!)

Alt Christmas Song of the Day: "Is This Christmas?" by The Wombats
at 7:32 PM