Grand Ridge Brewing has a reputation in Victoria for being the premier microbrewery of the State, largly due to their highly awarded beers and long running operations, which began in 1989. Regarded as one of the originals in the now flourishing local craft beer industry, many of Australia's top brewers been given a start or "done their time" in the Grand Ridge Brewery. All credit is definitely deserved.

However, the Grand Ridge beers have never really hit me as brilliant, super tasty or complex (other than the delicously beautiful heavy Moonshine Scotch Ale, which I love). Hence, they are not on my regular drinking shopping list. Although, I must say that I have only ever drunk the bottled products from Grand Ridge...so I do really need to educate myself further by popping along to a pub (or the Brewery itself) to try them on tap.

With most of the Grand Ridge range readily available through many liquour stores these days, my desire to try the Black & Tan became strong as this particular beer continued to elude me for months. I could not find it in stock anywhere! However, on a recent trip through Daylesford to visit friends, I popped into a very happy hunting ground for craft beers - Foxxy's Liquor (Cellarbrations) on Vincent St - and there I finally found a bottle of the Black & Tan (...and also stocked up on some Red Duck – taking advantage of the awesome deal of 20% off for any 6 of Grand Ridge, Red Duck and Holgate beers! Awesome.)

The Grand Ridge Black & Tan is the first combination beer that I am aware of trialling since starting my beer journey. It combines the Grand Ridge Gippsland Gold Pale Ale and the Hat Lifter Stout, both evidently quality beers from the first sip, but not exactly beers that have impressed or delighted me.

The Gippsland Gold tends to be an "occasion & situation" beer for me. Despite all its praise and awards, I often find it hit and miss, needing the right time/place/situation to really enjoy it. The Hat Lifter stout is a good stout, but not quite as good as many of the other excellent local stouts.

Pouring a dark but lightly transparent brown colour into a pot glass, the Black & Tan provided minimal head and it only retained the thinnest layer.

The smell was of a classic fruity dark ale, with a touch of the pale ale coming through as I inhaled more deeply the second time. It was actually very pleasant on the nose, I really enjoyed the aroma.

The deep roasted barley and malt of the stout were the dominating flavours to me, with slight hints of coffee and chocolate discovered the more I drank. The taste was somewhat strange at first, probably because it was my first encounter with a combination ale. However, it kept me drinking.

Fairly low in carbonation, the beer was very light in the mouth, which I think was just the Pale Ale side coming through. I wonder if it would benefit from a slightly higher alcohol volume, which stands at 4.90%.

The Black & Tan is certainly another quality Grand Ridge beer, but maybe not the sum of its two parts. Whilst the blend is interesting, I'm not sure about the balance and my enjoyment preference is leading towards the straight beers, in the individual Gippsland Gold and Hat Lifter.

Ultimately, the best thing about this beer is that it exists. Grand Ridge has produced something quite different to what the majority of other local microbreweries are doing on a regular basis, providing a unique taste experience. And that...is excellent.

I'm keen to get down to Mirboo North someday not too far away to visit the Grand Ridge Brewery and hopefully try this beer on tap.

My next Grand Ridge mission is hunt down and taste the Supershine! Although, my more immediate future once again holds a date with the Mountain Goat Brewery to try their coveted Rapunzel...! 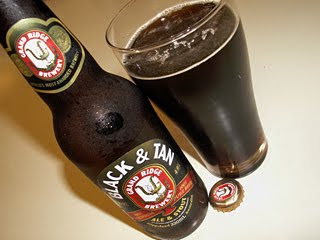