I love to blog when a beer, bar or band excites me. Tonight...the new Black Lung II from Moon Dog Brewing has excited me... seriously.

Wow...I love this beer! It's big, smooth and offers just the right amount of smokey bacon in front of a little tar.

Ok...so yes, if you know me (in person) or have followed my beer writings closely (unlikely!), you will know that I love the Moon Dog brewers and their crazy-ass beers. I do tend to write and tweet/facebook about them regularly-ish ...but that is simply because Josh, Karl and Jake continuously brew interesting shit (aka. excitingly good beer). They are also three genuine, intriguing (read: arousing) and entertaining Aussie guys ...so the words flow easily when seeking to share their story. Yep, it's hard (hehe..."hard") not to blather all over them. 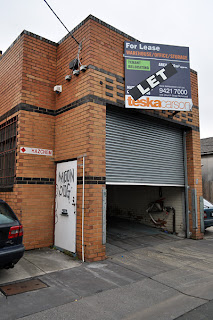 Moon Dog operate a tiny brewery in a converted workshop, which sits under the shadows of the massive Abbotsford brewery, the home of Carlton United Brewers (Fosters/SABMiller). They brew generally outragous craft beers that challenge the majority of beer drinkers and even beer nerds, offering a unique hit of crafty indulgence to Australian drinkers. Moon Dog are our own slice of BrewDog or Dogfish Head, when those breweries were in their infancy.

Other local drinkers (mostly beer nerds) complained about carbonation issues with the early bottle runs of Moon Dog beers last year, but that noise has dissapated significantly in past months. So maybe the brewers have made some improvements to their processes. Bottle conditioning extreme beers is a difficult science after all! 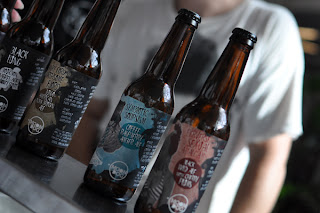 Whilst the original Black Lung was a delight, the new Black Lung II tickles my fancy WITH A BIG STICK thanks to it's ageing in whisky barrels that replaces he sweet vanilla of the former bourbon edition with the red hot camp-fire bacon of this... 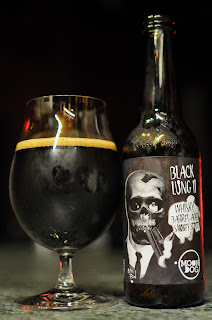 Dark and deep, bold and balanced, it ticks all the boxes for late night winter drinking. Beer lovers...as Daisy Steiner would say, "this... is the good shit."

Yes, I'm a non-smoking smoke-head as well as a hardcore geek for imperial stouts, so I naturally love this style. But there are many beers like this that I drink and enjoy...and there are those that excite me so much that I stay up past midnight* just to blog about it.

There is actually a nice subtle hop character peeking through from the back of this stout, but dominating is the woody whisky flavour that has been imparted by barrels from a distillery in Albany, Western Australia (Great Southern Distilling Company Distillery). The Moon Dog brewers has declared that they are "pretty happy with how it came together" and that they will be a fair few bottles hitting the local market.

So, beer nerds, head to your good beer retailer and snap this shit up! Maybe even tuck a few away in your "beer cellar" to see how it developed over time. Also, drink more Islay whiskey. cheers.


*I usually go to bed about 9:30pm to start the next day at 5:00am with a fitness workout session.

**Also... fuck this blogger for calling Black Lung a Porter and daring to compare it to Yeastie Boys xeRRex. So so sooooooo far apart Mr/Ms Ber Tracker 1.0!

***Whilst I'm being random with my asterix, check out the brilliant/amusing Tumblr feed for the tag Moon Dog!
at 12:42 AM