...but which one shall I drink?

Last year in March I posed a question to the twittersphere – what is the best beer at breakfast time? No, I'm not a raging alcoholic... *cough*. I just love exploring beer's full potential across the spectrum of time and place.

When Todd Venning of BeermenTV jumped into the online to-and-fro, the question snowballed into something truly special. With the 3 blokes of BeermenTV heading to Melbourne in May 2010 for a local beer expo, they used my question as the basis for their first BeermenTV live event – the "Hair of the Dog" Breakfast.

Held at Beer DeLuxe the night after 2010's Australian International Beer Awards (AIBA), the event was a runaway success. All who attended were soon calling for an encore and BeermenTV knew they had a precedent for an annual event.

The planning for the 2011 BeemenTV Hair of the Dog Breakfast was already in motion, with a return to Beer DeLuxe on the post-AIBA Saturday confirmed, when the Good Beer Week festival exploded into life. The two good beer concepts were natural partners, so the breakfast was one of the first external events brought into the Good Beer Week program.

As with last year, the 2011 Hair of the Dog Breakfast started with a line-up outside Beer DeLuxe at 9:30am on a cold Saturday morning whilst staff slowly checked off names and processed ticket payments. Those gathered were surprisingly sprightly following a week's worth of Good Beer Week activities, including the previous night's AIBA dinner and celebrations.

Also just like last year, Beer DeLuxe had been transformed into a large dining hall with several long tables set up for a big breakfast. The location works very well for this event. 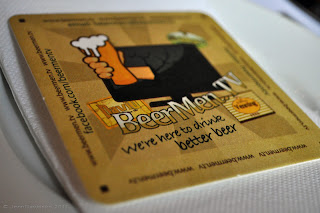 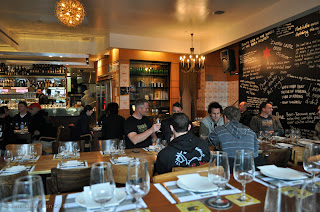 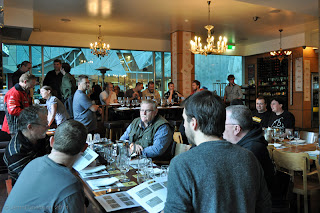 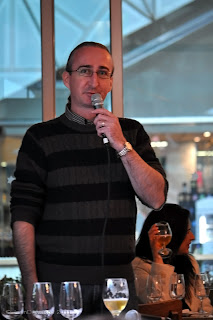 Todd Venning of BeermenTV
Beermen Todd and Mark opened the event with a straightforward introduction and explanation of the mornings proceedings, followed by the grand entranced of the third member of the BeermenTV crew, Damien, jovially dressed in a "Lukinbetta" beer bottle costume.

As the clock ticked over to 10:00am (the formal start of daily boozing according Liquor Licencing), everyone was provided with a goblet of the Feral Brewing Golden Ace to begin their beery breakfast. This unique Belgian Golden Ale brewed with Sorachi Ace hops has a big lemon and grassy flavour, which made it an excellent first beer. The kick of citrus fruits will wake you up, but it may became a little heavy towards the end of the glass. I thought it was a great alternative to the popular hangover "cure" of Hairy Lemon. 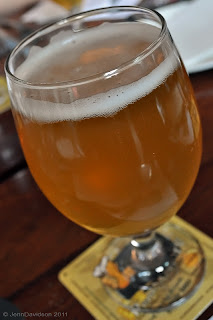 Feral Brewing Golden Ace
Next the food service began, five courses served along with two different beers. It was a great selection of breakfasty components. Overall, I felt that this year's food did not quite work as well as last year's offerings in regards to matching with the beers. Also, I'm not sure if it was just our table, but there were no food menus provided and the serving staff had little-to-mixed knowledge of the food items (not helpful when a vegetarian would like to know whether a dish contains meat and the wait staff are unable to answer!).

First course was a smoked trout and lemon myrtle quiche. The Bridge Road Brewers Chestnut Pilsner was matched with the quiche, but I found the strong flavour of the salmon stripped away most of the Chestnut Pilsner's taste. The lemon of Feral's Golden Ace was much better suited to the fish. However, the preference around our table was split between the two different beers. 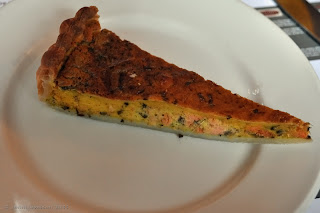 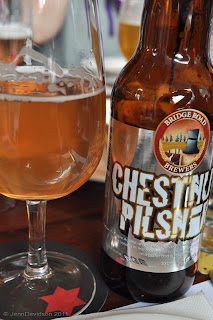 The second course was veal sausages with caramelised onion match with two beers from brewers that I am a big fan of - Red Hill Brewey's Hop Harvet Ale and 8 Wired Brewing's HopWired - two very different beers that both showcase hops in very different ways.

The Red Hill Hop Harvest is an ESB using the freshly harvested subtle hops grown on the grounds of the Red Hill Brewery, whilst 8 Wired's HopWired is a Double India Pale Ale jam packed with the powerfully aromatic and flavoursome hops of New Zealand. Both beers proved their worthiness in the breakfast setting. However, Red Hill's Hop Harvest won the battle to complement the dish, with the full bodied, rich caramel and dried fruit flavour linking well with the soft sausages and sweetness of the onions. 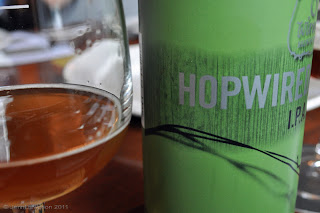 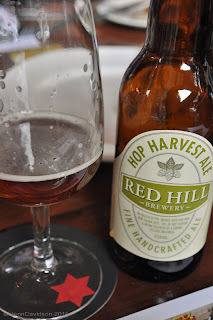 Next a very exciting new beer came to the table...the world's first (commercial) all peat-malt ale.

The Yeastie Boys Rex Attitude is brilliant. The massive, almost offensive, smokey aroma of the peat was interpreted a different way by everyone at our table. This Yeastie Boys brew divided the room between fans and opponents. No one I came across hated Rex Attitude, but a wonderfully wide range of emotions was evoked by the beer. Around the room the aroma was described as bacon, fire, charcoal, dettol, wet blanket and more. You expect Rex to burn your throat. However, behind the aroma is an enjoyable, almost sessionable, smokey golden ale with a dry finish. It is beer and whisky fusion done very well. 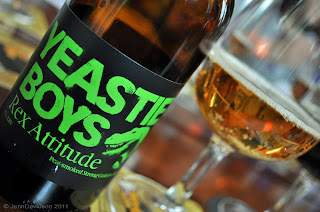 I enjoyed Rex so much, in particular as a breakfast beer, that a couple of weeks later I cooked myself a big fry-up breakfast to match with it. Even with my weak cooking ability, it was a joy consuming bacon, eggs and chipotle beans between sips of the beer. Rex Attitude may knock you out in more ways than one, but if you enjoy an assault on your senses to wake you up, it is an excellent breakfast beer.

Rex was matched with steak and onion on bruschetta, alongside the Holgate Temptress, which I have declared my love for many times. It was a curious choice in all senses of the pairings - beer vs food and beer vs beer. None of the combinations seemed to provide an all-round good match. Nonetheless, it was an excellent opportunity to explore the way beers and foods do and do not work together. 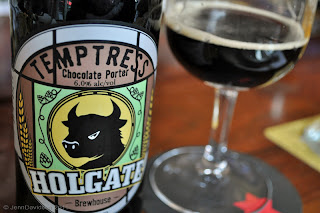 Breaking up the eating and drinking, the BeermenTV crew threw in crowd participation entertainment. First they ran a blind tasting - inspired the the Coke vs Pepsi taste test but with an American vs Australian beer. Their cheeky twist was that the first drink poured for the contestants was actually Coke. The loser of the actual beer taste of, fellow twitterer Hoppy Pete, was cursed to wear Damo's beer bottle costume... 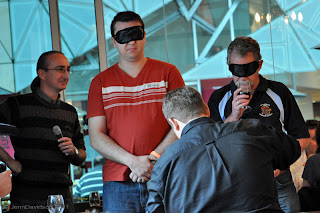 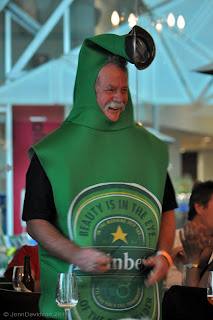 Mark lead a game of "heads and tails" based around (very loose) beer trivia. This lively pursuit lead to a personal Good Beer Week highlight, when my beautiful and intelligent wife won the game! She scored an awesome stash of good beer in a box, donated by Slowbeer (...wish she shared with her husband, of course...). Winning!! (Yes, she really is the brains & skill behind our relationship.) 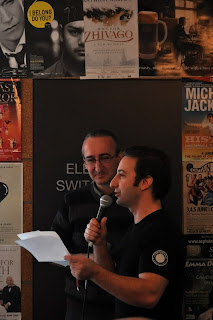 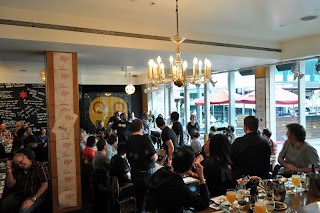 To start dessert, Darren Robinson of Doctor's Orders Brewing took the microphone and introduced his Zephyr double witbier, which was served with a rhubarb and ANZAC crumble. 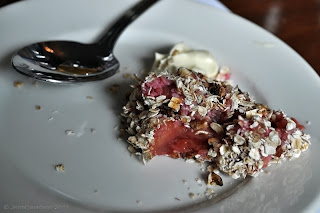 Then, to finish the beer and food component of the breakfast...it was stout time! Two stouts were offered with chocolate sauce mini-pancakes. The pancakes were a little bit of a let down after last year's divine matching of Holgate's Temptress with Belgian waffles dipped in thick chocolate sauce.

Thankfully, both the stouts were very rewarding. In particular, the bottled Heart of Darkness Belgian Imperial Stout from Murray's Craft Brewing was a delight. Heart of Darkness was one of my draught stout highlights during winter last year, so to see it finally in bottles was exciting. I may have consumed two bottles worth of Heart of Darkness...whoops...so my notes on or memory of the 4 Pines Stout are rather non-existent. 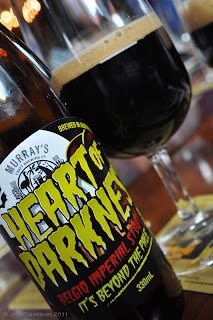 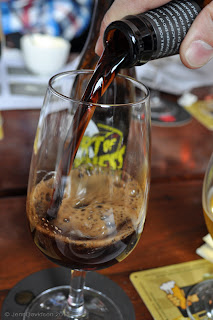 Pouring the 4 Pines Stout to match with chocolate sauce pancakes. 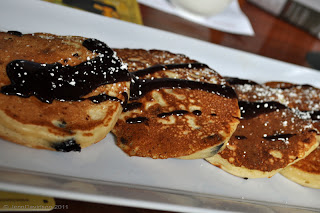 The morning was quickly wrapped up and the crowd moved outside for a refreshing schooner of Stone & Wood Pacific Ale, the 10th and final beer of the event. After the big stouts and rich desserts, it may have seemed a strange choice to end the event. But at 12:30pm on a sunny Saturday, it worked well.

Ultimately, the beer selection alone could not be faulted. It was an awesome line-up. Every beer showcased the craft of brewing, with unique interpretations of styles and hybrids.

Some "improvement" comments that I am inclined to suggest - for next year, tickets to event need to be pre-sold. Like last year, BeermenTV used an online reservation system to sell tickets, which attendees then paid for at the door. This meant that the event capacity was quickly pre-filled by those keen beer loving locals who paid attention to Twitter and the general beer community word-of-mouth. However, when it came to the actual event, there were a number of unfortunate empty seats because several people who have made reservations did not attend. The pay-at-the-door process also slowed down the entry, on a cold Melbourne morning.

The other issue that might need to be addressed in future is the number of beers. Two hours is really not enough time for 10 different beers (one bottled shared between 2 or 3 people) to be suitably contemplated and enjoyed, leading to a rushed mix of some very diverse and big beers.

Since Liquor Licencing restricts the event (well...the beer, at least) from starting before 10am, and the venue requires the space back from midday, the timing can not really be altered. However, the number of beers and matched courses could be better arranged to suit the flow and digestibility.

Having said that, it must be noted that $35 ticket was excellent value. With ten beers, 5 courses and entertainment, I loudy applaud the price!

Everyone I spoke to afterwards loved the event, because it was simple, entertaining and lively showcase of craft beer. Most of all, once again the BeermenTV and Beer DeLuxe teams proved that beer does have a place at the breakfast table!

All in all, this was a very good morning soaked in very good beer. It was my second most favourite event of Good Beer Week (after Thursday nights’ Brewers & Chewers at The Local Taphouse), simply because it was fun and less industry driven/focused, yet it still brought together the beer industry and general public in a way that encouraged quality beery interaction... 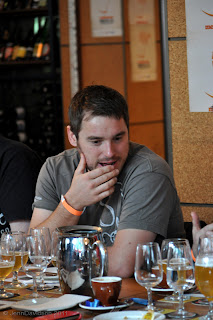 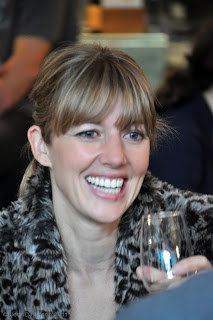 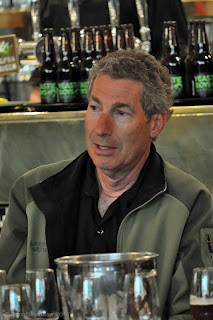 Steve Crossman, Ambassador for Sierra Nevada Brewing Company in the US. 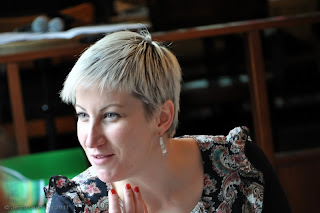 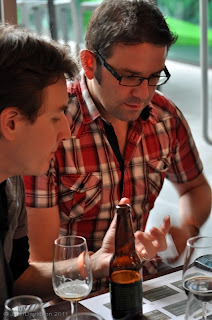 The Crafty Pint is harrassed by some random beer blogger. 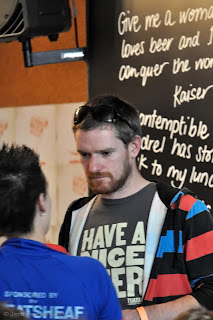 Stu McKinlay of Yeastie Boys chats with Jade Flavell of The Wheatshef Hotel in Adelaide.
Probably the best indication of the event's success...it was very hard to leave! As we enjoyed more beers in the sun and chatted to all the good beer folk following the formalities, the time passed unnoticed. The wife and I eventually dragged ourselves away for a late beer-absorbing lunch via the nearby Lord of the Fries.

Congratulations BeermenTV! I'm looking forward to the 2012 Hair of the Dog Breakfast!

For more insight into this event, I recommend the excellent Eat Drink Stagger blog post at: http://eatdrinkstagger.com/good-beer-week-that-time-of-year-again-when-beer-is-had-with-breakfast/
at 4:07 PM