This Sunday past in Melbourne was a sunny blue-sky day, much like today. A large portion of the city's population city was caught up in the return of AFL footy to our lives, as well as the Formula 1 cars screaming around Albert Park for the Australian Grand Prix.

It was the type of day that often drives drinkers to purchase and consume a six-pack or slab of easy drinking beers that are readily available at any local bottle shop or liquor superstore. (Also, these beers are often marketed IN YOUR FACE, everywhere you look.)

The current trend in beer products produced by the big commercial breweries for such occasions is the "dry lager". It is a style that I no longer understand. They tend to be very bland (if not completely flavourless), bodiless, flat and often labelled as a low carbohydrate beer.

You see, I can somewhat understand the "need" for and mass production of Australian lagers and mid-strength beers. However, in the last four years I have never come across any Australian person belonging to an apparent "clear majority" of beer drinkers that the big-brewers' market research suggests want watery bland dry lagers!

Even in North Queensland I witnessed drinkers choosing the flavoursome Blue Sky Brewery Pilsner, Little Creatures Pale Ale or foreign full-strength lagers like Corona over any such dry lagers. Whoever is bumping up the dry lager sales figures needs to try a real beer for once in their life!

In all honestly, I did spend much of my 20s in the pubs and bars of Melbourne, enjoying the pub rock music scene and drinking the usual beers that a Melbournian would be associated with - VB, Melbourne Bitter and later, Boags. When the low-carb dry lager concept really took off with Pure Blonde and Boags Classic Blonde, I misguidedly drank these beers in a silly attempt to mitigate my obesity.

Today, I am a craft beer lover. My drinking habits favour beers with depth of flavour, complexity, length, character, as well as exploring the diversity of beer styles. Additionally, since turning to craft beer I have learned how to drink smartly and balance good health, which has allowed me to drop all the excess weight I carried for 20 years. These days, I am fit enough to run 12kms in 50 minutes, yet still enjoy regular beers.

I will relatively happily revisit VB and MB in the right time of place, but cannot touch the new wave of "extra" dry lagers that are saturating the Australian beer industry, because they are pointless! No? Flavourless and with water like texture...what is the point to drinking such a beer other than to get drunk whilst messing up your body with a huge amounts of adjuncts? If you need to quench a thirst, drink water! It's good for you.

Nonetheless - in hope of saving myself from becoming a real beer snob - I decided to test these popular Dry Lagers to see if I could find any justification for their existence.

As a secondary mission, I wanted to taste these macro brewery profit makers against the Vale Dry from McLaren Vale Beer Company in hope of understanding why a company that is determined to be a craft beer producer would create such a product.

Currently brewing their two beers under contract at Australian Independent Brewer (AIB) in NSW, the McLaren Vale Beer Company beer are in the progress of establishing a brewery. Instead of first setting up a brewery, they decided to use their initial capital to establish a brand. Through their marketing, Vale Ale scored top spot (and big exposure) in The Local Taphouse Hottest 100 Craft Beers of 2010. Vale Dry came in at #9. The reaction to these results amongst the craft beer loving community was fierce and is well documented on a number of beer websites, such as The Crafty Pint.

All that aside...my question is:

Is there really ANY need for Vale Dry in the Australian beer market, against these beers... 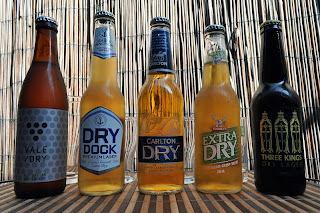 Note 1: All purchased from my local Dan Murphys I selected out of their fridge.
Note 2: Other products in the category include MAXX Dry by Coles and Coopers Clear, but would have been too much for me to include in this test.
Note 2b: I also completely disregarded XXXX Summer Shite Lager because it is shite. I tried it once last year out of curiosity and found no ever to ever let such a beer pass my lips again.

I would like to point out that I did approach the MVBeer team directly via email and asked them why they decided to produce a dry lager. However, whilst I recieve a response from them about a side issue, the "why brew a dry lager" question was completely ignored.

So, on a recent sunny Saturday afternoon, after a morning of household chores that induced quite a thirst, I sat down with each of these beers to test them side by side.

My comparison notes on these beers are as follows: 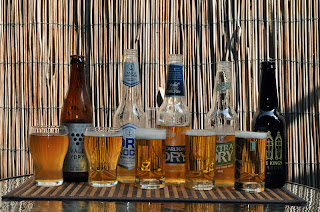 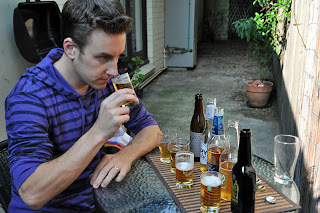 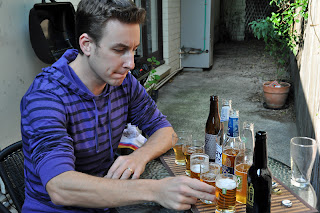 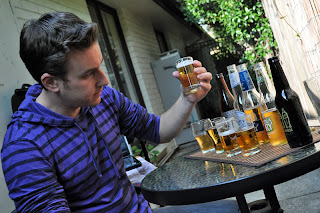 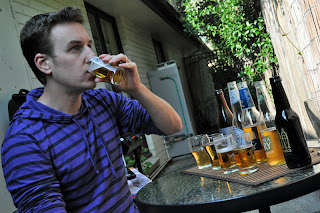 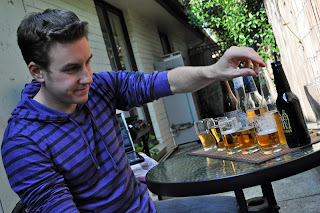 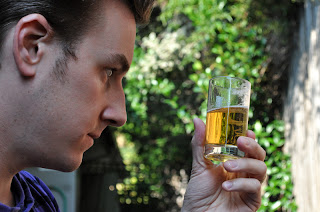 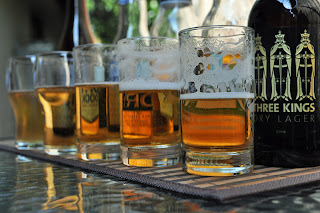 By far, the unfiltered Vale Dry was the stand out...relative to the macro dry lagers. It has flavour and more body than the rest, but I am not sure I rate its drinkability and sessionability. I would need to try a draught version on tap.

Nonetheless, if you really must drink a Dry Lager...please consider the pointlessness of the macro products -  produced only for your dollar - and maybe pick up a pack of McLaren Vale Vale Dry. At least you will experience some exposure to taste with Vale Dry, as well as supporting a business that hopefully one day will build up to being a genuine craft brewery. 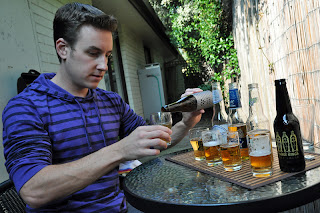 Ultimately, there is no need for any of these beers when there is the easy drinking, refreshing and flavoursome joy of the uniquely Australian Stone & Wood Pacific Ale! THIS is the beer dry lager drinkers should be choosing... 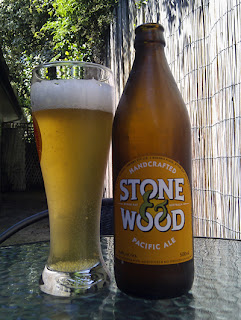