Melbourne is rocking along beautifully at the moment. The street-press pages are thick and live music venues are overflowing with emerging and established acts performing a diverse range of music..something for everyone...whatever your aural drug.

One particular gig that has hit my headlines is the "last gig for 2011" from Sin City...

"It's been 9 & 1/2 years since Sin City exploded onto the Australian music scene. Armed with nothing more than 3 chords and a maniacal stage presence the band went on to become one of Australia's premier independent rock acts clocking up over 900 shows, touring Australia countless times, moving from Perth to Melbourne, playing everything from the Big Day Out to Sounds Loud and with everyone from The Misfits to Metallica. Not bad for a pack of punks.

But now it seems the road is finally starting to catch up with the rock'n'roll juggernaut that is Sin City and the band are going on hiatus while members travel overseas and try to catch up on some sleep. They do promise to be back but not until at least 2012!

So let's get pissed and celebrate all things Sin City with a fuck off huge party at Pony on Saturday 16th April.

Starting from 9pm Sin City have invited some of their favourite Melbourne acts to warm up The Pony stage with Stranglehold, Bombing Angels, The Mercy Kills, Ramshackle Army and Australian Kingswood Factory joining forces to create one of the best line-ups you can see. Then from 2am Sin City play their favourite time slot in their favourite venue for the last time in who knows how long.

I have blogged here previously my love for Sin City and Pony bar's 2am late shows on weekends. This band knows how to kick on and on and on, whilst imparting their messy energy onto a forever keen crowd of randoms. If you love some raucous pub rock, it will be a night worth experiencing, supported by a local band line-up that is worthy of a big dirty rock party in a tiny space.

Sadly, this gig is on a night on which I'm committed to going to bed early, in preparation for the Herald Sun/City Link Run for the Kids event the next morning. In my world, running 14.38km at 9am makes gigging the night before mostly impossible. However, I encourage anyone who enjoys a late night out with a bit of dirty rock and a fun crowd to get along to this gig! 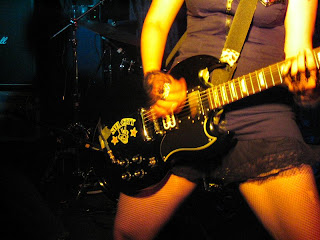 Sin City's Tash at The Green Room, 2006
My gigging has been somewhat limited of late. Nevertheless, I have locked in to revisit some of my favourite local artists over the next month and am looking forward to hearing what their support acts have to offer.

First up...tonight we are headed for the Big Scary gig at the East Brunswick Club. Supports include Kins (Thom Savage, formally of Oh Mercy) and Step-Panther from NSW. For only $12, I consider this something of a bargain gig these days - brilliant band, awesome venue - it is too rare to find such a gig under $15 these days. 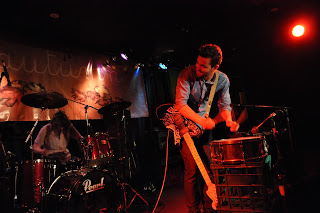 Big Scary at Northcote Social Club, May 2010.
Next week we'll catch The Jezabels play The Corner (wow...it has been too long since we've had a night at The Corner!) and then return to EBC on Friday night again for Gareth Liddiard and Dan Kelly.

Further, with the Melbourne International Comedy Festival commencing tonight, I am taking a punt on seeing LA comedy-music act The Dan Band at The Hi-Fi Bar. My only exposure to The Dan Band so far has been through their Christmas song "I Wanna Rock You Hard This Christmas" and their cameo in The Hangover, which has been enough hilarity to suck me into seeing them live. I do love quality comedians who are musically talented as well, because they inspire me whilst making me laugh...the type of high I embrace in life.
at 10:54 AM