As a big fan of the local Mussel Stout produced by the Bellarine Brewing Company, I was very keen to try out the Oyster Stout from New Zealand's Three Boys Brewery as soon as I learned of its existence a few weeks ago.

The recent online chatter surrounding this beer has been very complimentary, in particular due to the use of genuine Bluff oysters (Tiostrea chilensis) in the brew. Therefore, my expectations were quite high and hence the temptation drove me to purchase a bottle asap, which I picked up from Slowbeer on Saturday afternoon.

Pouring from the 500ml bottle into a pint stein glass, the beer was near black in colour and provided a delightful big thick tan coloured head that settles over time, with a small amount of quality lacing. Full marks for appearance.

The strong aroma provided an enticing stout presence of roasted malts and some coffee. My nose did not find any clear oyster scent. However, there was certainly something of an unknown element that my nose is not educated enough to interpret. Later I figured it to be something of a "sea" type smell, maybe a salty element.

The taste was complex and quite sharp in an enjoyable way. Full of lovely malts and roasted flavours, with a rounded edge to the stout's classic bitterness.

The more I drank of the Oyster Stout the better and richer it became, as the taste clearly grew in excellence towards the bottom of the bottle. I also started to discover a more apparent oyster character towards the end.

Despite such sharply rich and complex taste, it is actually beautifully smooth in the month, with a medium body and carbonation, making it very drinkable.

The only detractors for me were that the alcohol did not quite seem balanced enough, even though the alc/vol percentage is only 6.2 and also, I was hoping for a stronger, more warming oyster flavour.

All in all, it's an impressive stout (just not quite exceptional in my mind) that provides another quality drinking experience. However, I could have easily drunk two of three of these because as soon as I finished the 500ml bottle, I was ready for more!

Indeed, another brew to drink slowly and savour, allowing your mouth and mind to enjoy the full impact of its complexity. Most of all, I congratulate Three Boys Brewery for making an excellent beer using real & expensive oysters in the brew! That is indeed true "craft" beer, made to please (not just to make money).

In closing, I must note that I drank this Three Boys Oyster Stout after drinking a pint of the Mountain Goat Rare Breed Surefoot Stout, which I found incredibly enjoyable (will review fully soon). The Rare Breed Surefoot Stout trumped the Oyster Stout for me, primarily because of how well rounded and balanced I found it. Nonetheless, both are fantastic stouts that I would recommend to all, especially during these cold Melbourne Winter days. 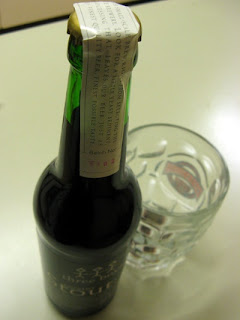 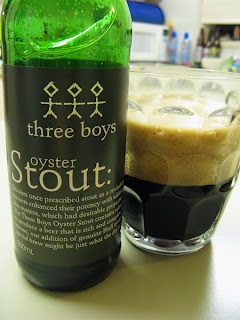