Wednesday night saw Slowbeer hold their inaugural paid beer tasting event. Due to the limited space available (it's a small shop!) and a number of rare and expensive brews available to sample, this was quite an exclusive opportunity, which I am very thankful to have been able to attend.

With a combined total value of over $210, purchasing one of each of the beers on offer out of your own pocket would be unobtainable for the majority. Hence, I thought the $25 fee was excellent value in order to discover whether forking out that $210 for the full enjoyment of these exclusive beers was worth it.

And what a way to start, with the theme of "Big Bold Barrel-aged Beers", Slowbeer went straight to the top with some amazingly powerful selections from all over the world, all of which have been aged for a period in various barrels to add an extra complexity and richness to the mix.

I had already recently purchased and tried two of the beers showcased on the night (Holgate Beelzebub's Jewels and Brewdog Tokyo*) and I have also sampled the Bridge Road Oak Aged Imperial Porter at a couple of other various tastings. Nevertheless, it was a pleasure to encounter all of these beers again.

I was primarily there to enjoy the experience, rather than review the beers. However, I was still able to make a few brief notes:

Mikkeller Weinbrand BA Red Ale – Imperial red ale aged in German Brandy barrels (RRP $25) - I'm not a brandy drinker (whisky is more my spirit) and this Mikkeller provides a serious brandy hit on both the nose and in the mouth. The taste of such a powerful Red Ale is new to me, so I found it rather unusual and a bit harsh, probably most dissatisfied by its lightness in the mouth yet super strong taste.

Southern Tier Cuvee 2 – American strong ale aged in American Oak barrels (RRP $19.50) - Pouring a lovely cloudy brown with a good head, the aroma of this ale was of sweet caramel, which followed into the taste. However, after several mouthfuls I found it became fairly rough.

Holgate Brewhouse Beelzebub's Jewels – Belgian style Quadruple aged in Macedon Pinot Noir barrels (RRP $53) - Already having drunk a bottle of this Holgate delight a month or so ago, I was keen to be reminded of its beautiful smooth taste...but also eager to see how well it stood up against the other beers sampled tonight. And I believe it certainly held its own very well against all the others we tried. Delicious, beautifully balanced, an excellently crafted beer! (Also good to see that the professionals also struggled to break through the hand-waxed lid, as we did when drinking Beelzebub's Jewels at home!)

Murray's Brewing Murray's Anniversary Ale 4 – English style barley wine aged in Hunter Valley Shiraz barrels (RRP $40) - Have heard many good things about the Anniversary Ale #4 and with its very limited availability, I was very happy to be able to finally try it out. Pouring from the champagne bottle, this beer gave a super huge frothy head, almost like a glass of champagne! Fruity, luscious hops, yet wonderfully smooth and soft, this beer is much easier to drink than other barleywines, I think due to its slightly lower alcohol of only 10%. The hint of Shiraz is a nice touch too, but I was left wanting a bit more in the overall taste and mouthful. I also found it a little too highly carbonated, so I didn't absolutely love it, but certainly enjoyed it.

Brewdog Paradox Springbank – Imperial stout aged in Springbank whisky barrels (RRP $11.50) - Definitely bold in character, providing a fairly clear and enjoyable whisky taste with some smokey notes, I wasn't overly taken by this beer but I found that it improved the more I drank of it.

Brewdog Tokyo* – 18% Imperial stout aged in french oak barrels and brewed with jasmine and cranberry (RRP $15) - Another one that was a second-taste for me, after drinking a 330ml bottle of the Tokyo* last weekend, which really knocked me out! I find the Tokyo* to be is a little too harsh for my palate, without redeeming itself enough in taste. Whilst I do very much respect how well the Brewdog guys have done to produce a very drinkable beer at 18% abv, it is just too much for me. Nonetheless, I'd be happy to drink it again.

Nøgne Ø God Jul Islay Edition – American strong ale aged in Islay whisky barrels (RRP $22) - Easily my favourite beer of the night (out of the beers I had never tried before). I loved the strong smokey flavour of the Islay whisky. Rich in aroma and taste, it is a surprisingly drinkable beer despite the dominating islay. Plenty of "wow" factor in this beer making it a truly unique drinking experience to savour. I bought a bottle of this to enjoy at home...one freezing winter night.

As per my usual rude addiction, I snapped a couple of photos with my old digital camera...for a further insight... 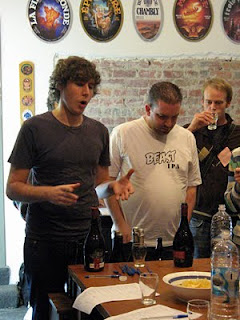 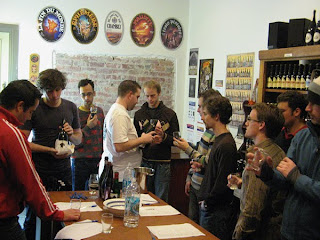 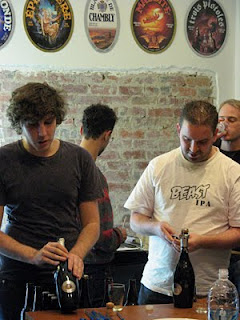 Murray’s Anniversary Ale 4, from one of Chris' favourite Aussie brewers. 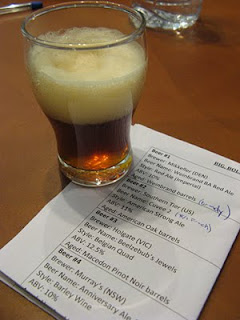 Up close with Murray's Anniversary Ale 4 and its brilliant large frothy head. 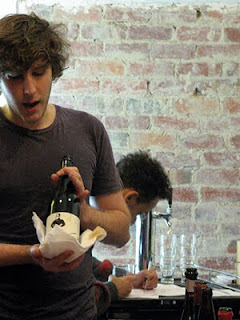 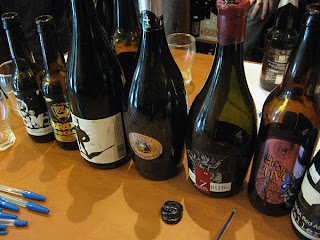 All done...leaving some very impressive empty bottles.
Oh...and I went home extra happy after purchasing some delights to savour at a later date... 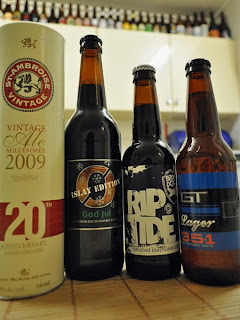 Looking forward to the next one (...possibly in August, keep an eye on http://slowbeer.blogspot.com)!
at 3:15 PM