In a recent Weekend Catchup blog, I mentioned that the only thing missing at The Royston Hotel was a decent stash of music street-press. Apologies! I was wrong, as I discovered when returning to The Royston last weekend, where I did actually find a neat stack of Beat magazines near the pool room (which I had missed last time). Therefore, the Royston Hotel truly is an exceptional pub...in my eyes.

Tucked away in Richmond, along River St (and just across the road from the Mountain Goat Brewery), The Royston was my ANZAC Day destination on Sunday 25th April. As an Essendon Bombers supporter, I like to find somewhere atmospheric to watch the big Essendon vs Collingwood footy game each ANZAC Day. I often go to the actual game at the MCG, but this year the weather forecast was predicting a cold and wet day, so I opted for the dry and cosy option. In addition, I was anticipating a very unfavourable result for my team (...and, sadly, I wasn't wrong).

Arriving at 2pm, just as The Royston opened on this Public Holiday, my other-half and I found ourselves a table in the front bar, which had an ideal view of the projected big-screen that would be showing the ANZAC Day clash. The crowd grew slowly, but remained small, casual and relaxed. The generally 20&30somethings crowd filled various pockets around the bar and mingled well.  (Maybe the "slightly hidden" location of this pub keeps it generally quiet and low-key...but that is certainly a desirable outcome for me...a "generally quiet customer".)

I was pleasantly struck by the excellent nature of those present, notably as the Last Post and National Anthem played on the TV screens during the pre-match ANZAC Day remembrance ceremony. Everyone in the pub was still and quiet. It was a beautiful moment, thanks to a respectful and mature crowd!

The massive horse-shoe bar dominates the centre of the Royston front bar area, surrounded by a number of small tables down the side, several long high benches up front, and an array of comfy couches down back. The dim lighting is perfectly suited to the rugged and characterful interior.

With nine quality microbrewery taps (and one Carlton Draught tap for the non-adventurous), including an old-fashioned Hand Pump tap, it can be hard to know where to start with such a choice. However, the sight of the fresh Bridge Road Brewers The Harvest on tap was a welcome first drink, kicking off the afternoon with hops and character. Two pints of The Harvest disappeared into me rather quickly, thanks to the very drinkable nature of this beer, but also due to the disappointing play by Essendon.

Half way through the telecast of the game, I needed to move onto something a little heavier (and even hoppier!), so next was a pint of the excellent Jamieson 'Beast' IPA, a beer I’ve never had on tap before. And it was delightful.

The result in the football game was a terrible one for me, with the Bombers thumped by Collingwood throughout the entire game. Nonetheless, I had a excellent day at The Royston, simply because the atmosphere was so positive and relaxed and the beer was perfect. We finished the day of with a drunken fun game of pool over a final pot of the Holgate Brewhouse Temptress chocolate porter for "dessert". It has been far too long since I've had Holgate's incredible Temptress on tap. This classic robust porter, is full of luscious chocolate, coffee, and caramel flavors...both in aroma and taste.

I have had a couple of meals in the front bar, but am yet to experience a meal in the Royston's Dining Room restaurant, so that is something for me to look forward to there.

The Royston Hotel is an absolute gem in the Victorian beer scene. Classic setting, casual atmosphere, great staff, fantastic beer, quality pub menu, good prices…I love everything about The Royston. Please allow some pictures to do the rest of the talking... 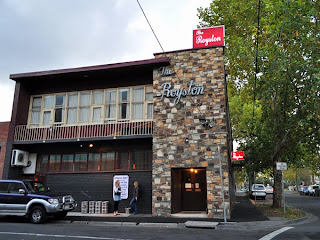 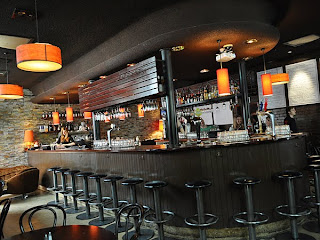 Love a pub that looks and feels like a real pub. 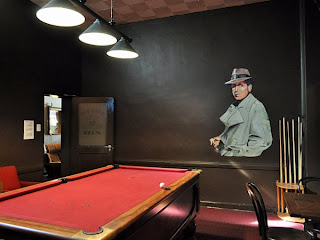 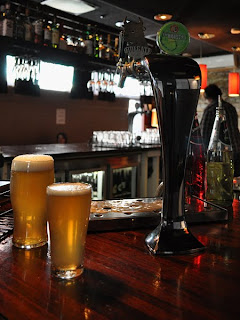 A pint and a pot of the Bridge Road Harvest to start. 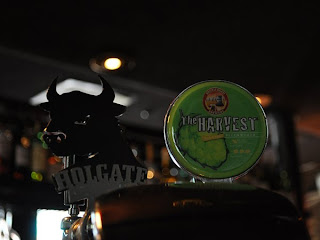 This is what I like to see adorning beer taps. 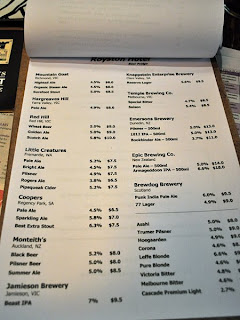 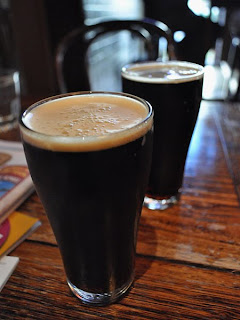 The superbly delicious and rich Holgate Temptress.
at 12:17 PM