Cherry Bar's short and "famous" history is no secret around Melbourne. From the many celebrities and big-name bands that frequent the bar whilst in town, to claims that Noel Gallagher offered to buy it in 2002, Cherry has often threatened to become exclusive by association. Thankfully, however, it never has.

Set up ten years ago as an outlet for live rock and roll when the genre seemed to be dying in Melbourne, Cherry is as popular today as any small Melbourne venue has ever been.

Wandering down the steep laneway that is ACDC Lane, those not familiar with the entrance may need to look twice for the door, which is somewhat camouflaged into the poster and graffiti adorned brick wall. Stepping through the door, you will probably feel out of place for a moment if you're not dressed predominately in black or covered in tatts. Fortunately, this is not an issue, because the Cherry crowd is rarely a pretentious one and the vibe is super casual and friendly. Cherry's patrons are music loving randoms. Sure, you see the occasional poser, pair of stupid high-heels and that guy who knows everyone, but that's just the city for you.

Often referred to as "grungy", I suspect that label often comes from the people who spend most of their time in the DJ clubs and Euro pubs...and not in the depth of the live rock scene.

Despite its hard rock reputation, Cherry is by no means grungy. With a low-lit red and black interior and low-light, the "authentic rock character" factor inside can seem a little forced. Cherry is clean, well maintained (in part helped by the smoke&water damage of the fire in the overhead buildings back in 2008, which required repairs to Cherry’s roof) and sparsely but carefully decorated. Here it is more about "that conversation we had with that guy" or
that gig when the band played/did that". Head up the road to Pony for grunge.

The clearest indication that Cherry is a lot shinier than it pretends to be is the lack of a draught beer tap. There is currently only one beer tap and it was pouring Stella Artois ($4.50/pot) when I was there recently. This premium import lager gives away the bar's desire to appeal to a "higher end" city crowd. I'm sure the true rock patrons at the bar would much prefer $4 pots of VB/CarltonDraught/BoagsDraught (yes...if you're gonna have a shit been on tap...then have a shit local draught on tap).

Fortunately, the bottled beer selection is much better and generally superior to most equivalent bars in the area. Looking up to the roof beam which is used as the beer menu chalkboard, you find a list ranging from local stubbies for $5.50 to boutique local and international beers for $8, the bar has a useful range. The best value is Matilda Bay's Beez Neez for $6.50/bottle. However, this honey-infused Pale Wheat Ale is a niche beer that won't be to too many peoples liking.

I was happy to see at least one guy nursing a Little Creatures Pale Ale, the clear pick of choice beers to suit this venue...if money is not an option. Unfortunately for me, as often the case, my money situation restricted me to stubbies of VB, which I was quite happy to suffer for the $5.50 price...reasonable enough in the middle of the city (these days you'd expect to pay a least $6 at most CBD bars for their base lager).

As for the rest of the drinks selection, behind the bar you will find the usual selection of spirits and some wine...plenty to suit practically everyone.

Cherry's split level layout is perfectly suited to the acts the venue showcases. The lower level allows those who just wanna rock out to fill the floor in front of the stage, with bench seats/steps running around the perimeter of the square for those who need to relieve their feet or want to see the stage action over the tall heads in front of them. Others can choose to hang back on the upper level against the bar or relax a bit on the couches, with a couple of low tables to rest your drinks on.

The sound is top quality throughout the venue, maybe a little understated at times (not always a bad thing!).

I think that the best time to go to Cherry is generally on the "quieter" nights (any time other than Friday and Saturday nights), when a modest crowd will allow you to move freely and enjoy some couch time. Although, there's always something special about being jammed in for a hot and heavy night of rock at Cherry Bar...just get in early, because you shouldn't have to queue for a venue like this and will find yourself doing so on the popular nights.

Cherry is a great venue and a fairly rare breed around Melbourne's CBD. It can be hard to leave once you've settled in. Just don't be fooled to think that Cherry is the essence of authentic Melbourne rock...because it does not yet quite have the blood, sweat, sticky carpet and tears behind it that some other venues possess...(or maybe I still slightly jaded by the recent closure of The Tote!). 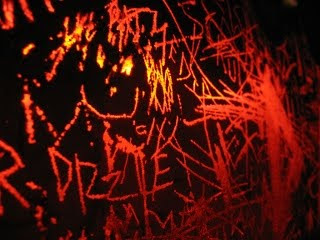 The backlit graffiti-scratched bar at Cherry
at 5:04 PM