S.L.A.M. is "Save Live Australia's Music", an independent entity made up of musicians and music-lovers who have formed to fight the excessive requirements placed on live music venues by Liquor Licensing Victoria (LLV).

Ill-conceived changes to the law made by LLV have had unintended consequences for the local music scene, with many small live music pubs and venues being categorised as a "high risk" location, simply because they play live music! This has forced an extreme financial weight and restrictive requirements on the venues that make Melbourne's music scene so brilliant. Many such venues are now on the brink of closing down...or simply no longer able to support local live music because of Liquor Licensing.

The biggest hit so far has come with the closure of the iconic Tote Hotel in Collingwood, one of the most loved, stickiest carpeted, long running live music venues in Melbourne.

Right now...the wonderful, music and Melbourne loving people of this nation (and beyond!) are gathering on the Melbourne city streets to protest again Liquor Licensing Victoria. Thousands and thousands of people making their voice heard...marching down Swanston St!

I really wish I could be there...but work commitments disallow me. (I'm there in spirit!)

THANK YOU to all the people who are there...helping SAVE one of the BEST things about this city - the live music scene. 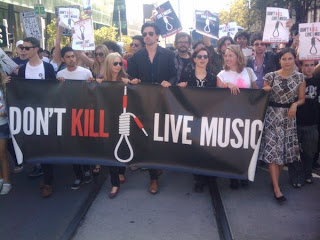 Something For Kate's Paul Dempsey and Steph Ashworth (along with Missy Higgins, Henry Wagons and others!) help lead the SLAM Rally.
at 4:30 PM