What? Halloween? What's that?

Yes, it's mostly a foreign concept here in Australia...but it's also an excuse to theme another day full of beers, bars and bands. And we can now, because Pumpkin beers are now available in Australia! (Read Jenn's blog post for more on that: Boo! Spooky Pumpkin Ale Scones) 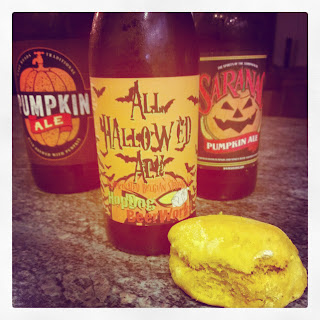 So here is a beer, a bar and some bands with a Halloween feel for this dark night of pumpkins and lost souls... 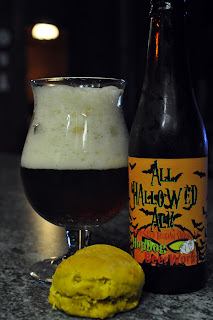 Recently arrived on the shelves of Melbourne's craft beer retail, HopDog BeerWorks is producing some very tasty hybrid style beers with a twist that celebrate the craft of beer. Craft beer!

All Hallowed Ale is a Belgian Pumpkin Ale brewed with roasted pumpkin, specialty sugars and spices. It pours a golden-amber, providing a pumpkin appearance. The Belgian yeast dominates the aroma and flavour, but the pumpkin is also clearly there on the aroma. The pumpkin is a bit lost in the mouth though, as the Belgianness of cloves and a little banana plus bitterness take over. Good softer hits of spices and sweetness....but not enough pumpkin for me. I did not pick the 7.3% abv because it is very easy drinking.

My experience with pumpkin beers is very limited so far. Unfortunately the best one I have tasted is still about two weeks away from being available in bottles - the very pumpkin Artisan Pouseure spiced pumpkin ale from Moon Dog Brewing. We tasted this year's batch at last week's Fed Square Microbreweries Showcase and it was just exactly what we want from a pumpkin beer. 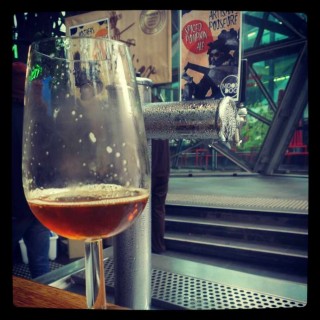 When I look for some spooky rockin' locals on my playlist...well, it's a bit of a stretch. Nonetheless, I head straight for a bite of girl punk from the last decade. Maybe more fluffy than dark, but all good grisly fun...have a listen...

Zombie Girl by The Spazzys

Dating The Undead by Sin City

There's plenty of appropriate songs from the locals guys too...like Deadman by Expatriate and Dead Dog Standing by Ratcat, plus plenty of tracks from Grinspoon. Of course there is also plenty of Halloween style fuzz from the Aussie metal scene...but my own playlist lacks the short-fast-loud at the moment (and this post has been too hastily last-minute to mine that rich well).

The bar that died then returned to life!

At age 30, The Tote was shut down under the weight of bad government policy for live music venues. It was revived by several spirits who care deeply for the culture and sound of Melbourne's music. Read the story on Wikipedia or buy and watch the brilliant documentary, Persecution Blues: The Battle For The Tote.

Dark, hard rocking, sticky carpet (less sticky now though...since the original bandroom carpet was torn up at time of Tote death). Many Halloween appropriate bands have blown through the speakers of The Tote bandroom, Cobra room and front bar. An icon of Melbourne's live music scene and culture. Often scary...but thankfully there is Mountain Goat beer in the fridges. Rock on...forever. 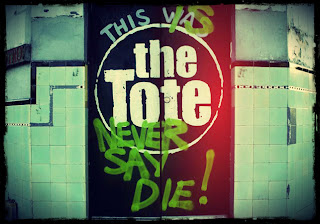