Novelty Beers (The Session no.68)

The Session is a monthly event for the beer blogging community, started by Stan Hieronymus at Appellation Beer. On the first Friday of each month, all participating bloggers write about a predetermined topic. Each month a different blog is chosen to host The Session, choose the topic, and post a roundup of all the responses received. For more info on The Session, check out the Brookston Beer Bulletin's archive page.

This month's Session is hosted by Tiffany Adamowski of the blog 99 Pours. Her chosen topic: Novelty beers.

"What novelty beer comes to mind when you think: Is this beer just to strange to stay around? Why in the world would they choose ingredients most beer drinkers have never heard of ...what the heck is a qatar fruit? If it’s okay for beer to taste like tea or coffee, why not pizza? If wild yeasts are allowed to ferment beer, then why not beard yeast? If oysters, why not bacon? If pumpkin’s good enough for pie, why not beer? Since hops are flowers, why not brew with actual flowers?"

I love exploring beer, all beers! I will try any beer I come across and there are definitely some weird and wonderful beers out there these days. Actually, the list of ingredients with which brewers from around the world are experimenting now seems to be endless, as is the number of never-seen/tasted-before beers that I have consumed in the last few years. Even in this small corner of the beer world, Scott Wilson-Browne of Red Duck alone plans to brew 50 new, unique beers in the next year!

There's just too many delightfully eccentric and peculiar beers to mention or even recall. I'm too much a fan of big, bold beers that some people may dismiss as novelty. Hence, I struggle to pick one to highlight because I'm always looking for the next one.

So I thought that I'd take this topic down the road of what the term "novelty beer" means to me...

I call these beers craft!

They may initially be novel in nature - new and unique - but when I continue to drink such a beer because I love it, the beer hence becomes familiar. No longer novel but a regular treat of good beer drinking, beyond the diminishing tag of novelty.

This is what defines my concept of novelty: a quirky concept that I won’t revisit once experienced. It will remain novel because it is a one-off experience. And should I happen to drink a novelty beer more than once, it is likely to only happen a very small number of times and for a specific reason to match an occasion/situation, so the beer still remains a novelty.

More often than not, a novelty beer is a shit beer. You don’t buy/drink it for the beer, you buy it for the concept emitted by just part of beer, such as the name or packaging, rather than the whole beer experience. Novelty does not respect the beer, it is produced for a reason other than the combined science and art of brewing.

A classic novelty beer from my corner of the world is Piss beer. As you would expect, the Piss beer concept was born from a boozy joke. The men behind the Great Britain Hotel in Richmond were more than happy to “take the piss” to help promote their pub in the spirit of Aussie larrikinism.

Piss is a generic 4.9% abv lager. For any good beer lover, it literally is piss. It's an easy laugh. You drink it once so you can say that you literally have drunk piss. Thankfully it's easy to perceive the joke of the beer, as the Great Britain Hotel holds a special and respected place in Melbourne's craft beer evolution. It was the first pub to sell Mountain Goat beer (exactly 15 years ago this month!), opening a new wave of craft beer industry and culture in this now beer rich city. Yep, GBH was ground zero for Melbourne's 21st century craft beer boom!

Other Australian novelty beers in this vein include Broo, Good Head and Kwencher. These beers could all be the same beer: generic, bland, "premium" lagers. They are simply a name and a label that makes them a one off.

There’s also Skinny Blonde with it’s heat sensitive label. On a cold bottle the label shows a bikini clad girl, then as you drink the beer and the bottle warms her bikini disappears.

Not surprisingly they are all contract brewed for non-brewing companies that have a single beer brand that capitalise on the marketing dollar. Do they serve a purpose? I don't think so, that's why they are novelty beers. 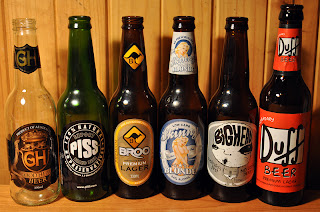 And then there's Duff. The latest attempt to market the famous beer brand of The Simpson's was squashed earlier this year by the might of 20th Century Fox's copyright lawyers*. 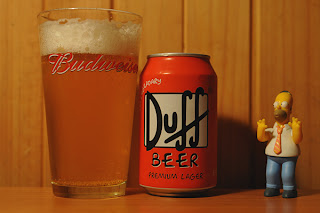 Under the label of "The Legendary Duff Beer – Premium Lager", the beer was brewed at Eschweger Klosterbrauerei in Germany. Despite media reports claiming that all remaining Duff beer in Australia was required to be poured down the drain by retailers and the distributor because it is now illegal, stock of the beer is still kicking around bottle shops of Melbourne. I stumped across cans of it and thought it would be appropriate for this post.

Indeed, this Duff beer sadly lives up to my interpretation of a novelty beer. It seems to be a Czech Pilsner but tastes like beginners homebrew. It is unbalanced with a grainy texture. The taste and mouthfeel was essentially beer flavoured lemonade. It’s drinkable, I was able to consume the whole beer, but the short finish on it wasn’t particularly pleasant.

The label is iconic but there is no respect for anything more about the beer than just the imagery. Although, maybe that's what the real Duff beer of Springfield is like...dirty, weak swill drunk by just a few old disheveled men who are sad permanent fixtures at Moe’s bar? Surely it should at least be an American lager with the brown-ish appearance of the cartoon.

It might be fun to have the empty can on display in my "man cave", but not for the sake of the beer.

I'll stick to drinking the crafty brews that I don't want to be a singular, novel, experience. Hand me a pint or three of that harshly smokey, 7% abv golden ale made from 100% heavy peated distilling malt! Mmmm...yes, Rex.


*For an excellent insight into attempts to use the Duff brand in Australia, read The Return of Duff Beer – Only This Time it’s 'Legendary' by Amanda Scardamaglia of the (now ceased) IP and Media Law blog, The Fortnightly Review.
at 9:50 PM