This quick post, in honour of International IPA Day 2012, (drunkenly) looks at the IPA from Mornington Peninsula Brewery.

I chose this beer because it is my most checked-in IPA on Untappd. The reason for that is because the Morningtoin IPA spent several recents months on tap at the bar of one of it's biggest fans, Brad Merritt...the owner of my local, Oscar's Alehouse. Hence, many friendly pints of this been have been consumed, in a row, a short stroll from home. 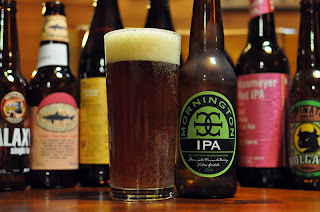 One of the youngest small breweries in Victoria, Mornington Peninsula Brewery had quiet beginings in 2010, but is now starting to make some serious noise. Lead by head brewer, Andrew "AG" Gow, Morington is now producing hit after hit of quality, good-drinkin' brews. Without straying too far outside of style and classic modern brewing, the brewery is growing quickly as it finds favour with Victorians with their fresh, richly flavoursome and balanced beers.

From the bottle the Mornington IPA pours a deep cloudy amber, a lovely hue, clearly full of yeastie floaties. This beer ain't filtered! The beer's head is gives good...size and whiteness. The head retains reasonably well but is a bit loose. The important part, when it comes to head, is that he legacy left behind...the lacing...is beautiful. The Mornington IPA gives good lacing.

The aroma is full and lush, robustly hoppy without punching up your nose. As described by the brewer, stone and tropical fruits like apricot and peach lead you into this beer. Late hop additions of Citra, Amarillo and Centennial give this IPA plenty of front hoppiness

This beer is spot on for body and carbonation. Actually, the look and feel of this beer is more along the lines of an English IPA, but the aroma and taste is all American hops. In the mouth the lushness continues with a solid malt backbone and long hoppiness that doesn't overstay it's welcome. There is sweetness a-plenty to keep you coming back, yet the hops are still king.

Yes, the Mornington IPA is a good honest local IPA. It's a beer to enjoy with friends at a bar or at home with a spicy curry dinner. Drinkable by the pint yet satisfying by the pot. A classic, tasty brew...and an excellent choice for IPA day. 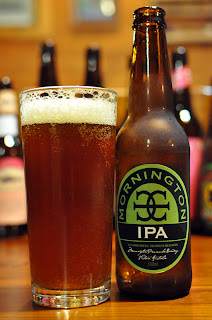 We're heading back to Morington Peninsula Brewery for a quick visit (pizza lunch and beers) on Sunday, which is exciting because I love their space and setup, plus...they have just released a new Imperial Stout (...which I won't be able to drink because I'm driving)! Local beer joy. That's what it's about!

And then there was IPA Day hops p0rn... 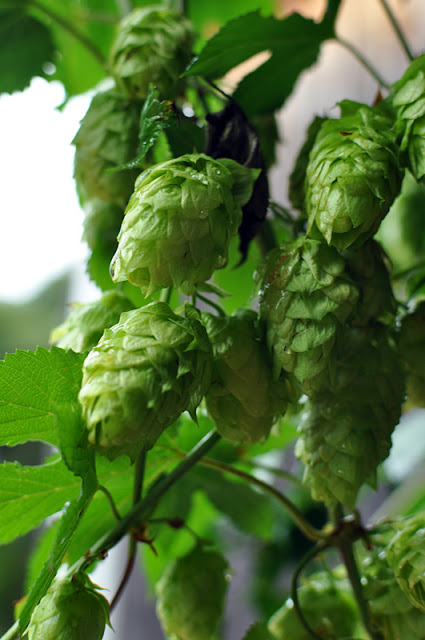