Returning for the third year in a row, the Hair of the Dog Brewers Breakfast at Good Beer Week is now the unofficial after-after party of the Australian International Beer Awards. Originally conceived and run by the BeermenTV crew, the morning-after-AIBA event is designed to showcase craft beer’s potential to compliment modern breakfast dining, whilst possibly curing any post awards night hangovers.

Thursday night saw the 20th Australian International Beer Awards announced at a gala dinner, with many of victorious brewers celebrating the night away at Beer DeLuxe following the Award's formalities. Several had barely left the venue when 10:00am ticked over on Friday morning and the Beer DeLuxe doors were reopened with the city beer bar transformed into a breakfast hall.

On entering everyone received a bottle of the Southern Bay Sunrise Breakfast Beer, a full and fruity golden ale, and then found a seat amongst familiar faces of brewers, beer industry folk, beer lovers and the occasional foodie and curious city dweller. 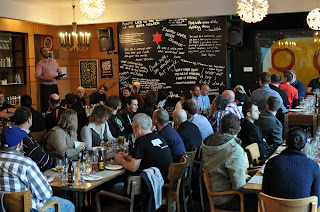 Good Beer Week co-founder and Beer DeLuxe main man, Miro Bellini, hosted the proceedings in place of the absent Beermen this year. Miro introduced the morning's structure and prepared the crowd for a big morning of diverse and plentiful beers. The gathering were in good spirits, but with most already coming off several days in a row of good beer indulgence, excessive consumption was never going to be a problem here.

Kicking off the food element of the breakfast were honeycomb & hopped butter pancakes. They were paired with the popular Bridge Road Brewers Beechworth Pale Ale and the Moo Brew Belgo, a hybrid Belgian ale of only 4.5% abv, which is the newest beer in Moo Brew’s bottled range.

Wheat beers were next in line, matched with ricotta and capsicum stuffed mushroom. The AIBA Champion Large Australian Brewery, Feral Brewing, lead the way with their Feral White. Next Shawn Sherlock, head brewer at Murray’s Brewing spoke about his American style Wheat, the Whale Ale.

The stars of Good Beer Week are the brewers of the good beer we drink. Whilst this Hair of the Dog breakfast may have lost the flair and boyish humour of the BeermenTV hosts from previous years, the spontaneous comedy of the exhausted but forever generous and entertaining brewers kept the hungover crowd regularly amused. 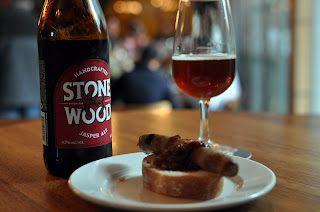 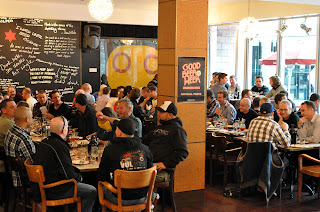 As has been tradition at the previous Hair of the Dog events, a round of True of False trivia presented the opportunity to win a very valuable goodies pack of beer. However, this year the game was over almost as soon as it had started. The first question knocked out all but a handful of punters!

Miro asked, "True or False: On Google searches of 'beer' and 'wine', there were more results for “beer” than for 'wine'?"

Surely a crowd of brewers and beer lovers in the middle of Good Beer Week would only have beer on their mind? And they did! Those correct few who chose wine remained standing for the next question, which then ended the game with only one person correct again. Of the 15 trivia questions Miro had prepared, only two were required. It was the most unexpectedly rapid round of trivia we had ever witnessed and a moment of baffled hilarity for all. 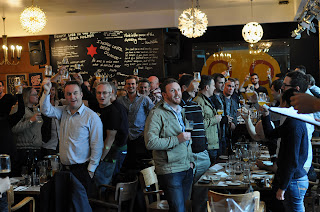 As the morsels of food continued, the Okononmiyaki (Japanese prawn pancake) proved a popular item alongside Holgate’s Hopinator. Paul Holgate told the crowd of the influence Dogfish Head’s 90 minute IPA from the US had on him to develop a big malt driven double IPA. Hopinator remains once of Australia’s most unique double IPA.

Two big style smashing IPAs provided an interesting contrast when tasted side by side and when washed over the sweetness of the candied keizerfleish. The Doctors Orders Plasma White IPA (7.6%) and Mountain Goat/Mikkeller collaboration, Gypsy and the Goat Pepperberry Black IPA (7.0%), proved themselves as worth breakfast beers with their hop bitterness cutting through the sugary candied keizerfleish. 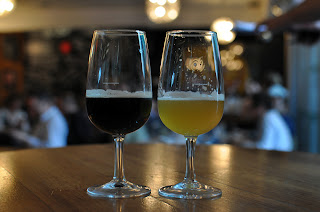 True South’s Saison du Framboise was an obvious match for a dish of fruit, but it was the 5.5% Moa Brewing Breakfast Beer, a soft and refreshing fruity lager, that provided the better compliment for the strawberries and chocolate mint salsa.

Dessert provided a special treat for all with the just bottled Cavalier Imperial Stout paired with fig jam and blue cheese toast. It was a massive way to end breakfast, both in flavour and alcohol content, but the rich dark and warming beer stood as a fine substitute for morning coffee and chocolate. 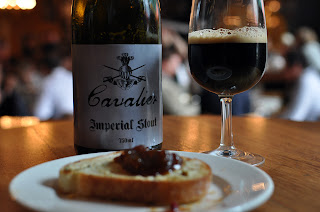 Once again the Hair of the Dog Brewers Breakfast was a fun morning that allowed casual mingling and close discussion with the brewers of Australia's good beer. Unfortunately, the event once again proved a little too big for itself. Seven courses across fifteen beers over 90 minutes was unbalanced. If the courses had been bigger, rather than just a mouthful each, and with fewer beers, the breakfast beer concept would be afforded a much better showcase. In previous years there seemed to be more appreciation and education for how the selected beers complimented various breakfast foods. Whilst Miro did warn the crowd at the start, this year’s event just tried fit in too many beers, which many found a heavy challenge rather than a relaxed breakfast.

The winning factors behind this event are the excellent value for money in the ticket price ($35) and the way it is always well attended and received by the brewers visiting Melbourne for AIBA, along with the proficient coordination and service by the Beer DeLuxe staff. We'll all be looking forward to another Hair of the Dog in 2013.
at 1:33 PM