It's MAY...and after last year, that can mean only one thing...it's Good Beer Week month!

Yes indeed, the countdown is on to the third week of May - 12th to 19th - for a festival of events that is all about crafty, delicious, flavoursome, complex, debate-provoking, GOOD beer.

Good Beer Week is a smorgasbord of beer, food, entertainment and all sorts of social fun that makes enjoying a beer with friends something uniquely special. Australian craft beer will be flowing aplenty from the taps of Melbourne's bars, pubs and venues. Also, some big names of the international craft brewing scene will be flying in to put their stamp on the prestige of our little industry, with Kjetil Jikiun from Norway’s Nøgne Ø and Moylan's Brewery founder Brendan Moylan both featuring at events. Moylan's and Nøgne Ø are the two most recent Champion Exhibitors of the Australian International Beer Awards (AIBA).

The Good Beer Week festival started last year as a little idea over a few beers, then became a run-away success and the talk of craft beer across Australia. This year the festival has grown exponentially. Maybe in future, we hope, Good Beer Week will rival the Melbourne Food & Wine Festival.

Naturally, Beer Bar Band will be diving into the week's events...writing, blogging, drinking, tweeting and enjoying. At the top of the "to do" list, we've locked in are several returning events, which made such an impact last year (enjoyment factor turned up to 11!) that we didn't want to miss them this year.

We'll be at:
***Update 04/05/12 - WOOT...the wife won tickets to Monday's Beer & Cheese experience via the Good Beer Week social media engine, which is giving away tickets to various events each day. We LOVE cheese and beer matching, so this is an extra bonus.***

We're also keen to crawl around to several of the pubs featuring a "Pint of Origin", where the beers of a specific Australian State will be showcased across the pub's taps.

I'm sure there will be more events you'll find us at. We just have to work out how to manage responsible travel in this single-driver-team-who-now-live-over-an-hour-away from the party central of Melbourne city. Hmm, tricky. There could be some damn expensive taxi rides!

If you're looking for recommendations of which events to attend...well...there's no need...just pick ANY event to get started! Oh, and definitely hop onto anything involving the guys from Innspire, Yeastie Boys and Stone & Wood, who are guaranteed to make any event extra GOOD.

Soon I will be posting a Survival Guide to Good Beer Week, so stay tuned for that.

Hope to see you there! 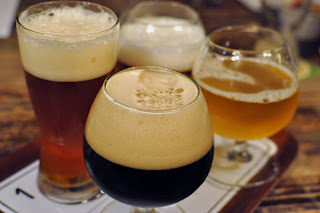 Mmmm good beer...where do you start?

Find the full program and all the info at www.goodbeerweek.com
at 10:39 AM