Two weeks back, on the night before our febfasting was activated, I meet up with Chris Nelson and Merideth Canham-Nelson, aka The Beer Geek and Beer Girl Geek. Chris and Merideth are intrepid brewery explorers, travelling the globe to visit every brewery they can reach. They actually hit 700 breweries visited during this visit to Australia!

After crossing paths at Mountain Goat Brewery during their 2009 visit to Australia, it was great to formally catch up this time and chat all things local-beer-industry. We began over Aussie craft beers at Beer DeLuxe and then drank the new Mad Brewer's Hoppy Hefe at Portland Hotel, home to the Melbourne James Squire Brewhouse.

Sharing the good beer love, we swapped local beers. I gifted the BeerGeeks a Ninkasi's Angel and the 2011 Mountain Goat Rare Breed Surefoot Stout, which I thought was an especially fine batch.

In return...I received the coveted Pliny the Elder! Score!

Brewed by Russian River Brewing Company in Santa Rosa, California USA, Pliny the Elder is one of those "holy grail" craft beers in the beer nerd community. This 8% abv American Double India Pale Ale holds perfect scores on both RateBeer and BeerAdvocate. It is widely considered the style benchmark for American Double IPAs and regularly appears high on lists of all-time best beers.

Whilst many may now concede that Pliny the Elder has been outdone by newer Double IPAs, it continues to hold the highest of reputations due to its influence on American brewing. Russian River's owner and brewmaster, Vinnie Cilurzo, is often credited as the inventor of the American Double IPA style and so to many Pliny The Elder, their flagship beer, will always be "the original and (hence) the best".

Understandably for Russian River's microbrewery operation, availability of Pliny the Elder is very limited. Distribution of this beer only reaches across a very small portion of California, let alone barely touching the rest of the USA (here's a good blog post that covers this discussion in more detail). It's just like the limitations of our own Aussie craft brewers. One could only taste the indescribable joy of the Red Hill Double Barrel Aged Imperial Stout if you had physically visited Red Hill Brewery when it was available for a short time...it was the only option for acquiring a bottle. However, Pliny the Elder's history is also written in brewing folklore. Hence, the scarcity of Pliny the Elder adds to it's wonder and desire.

Like many other Australian beer nerds/snobs/fans, I was unlikely to ever experience Pliny the Elder without making a specific pilgrimage to Santa Rosa. Therefore, we are teased by the myth as we're left wondering "what's all the fuss about?"

There is one other way to experience such a beer...and that's to have a generous, craft beer appreciating local bring you a well treated and relatively fresh bottle. I was lucky enough to find myself in that situation. 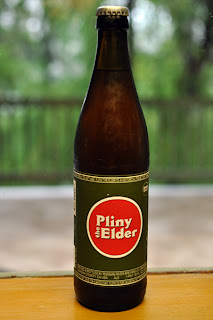 Pliny the Elder's bottle label implores you to drink this beer as fresh as possible, not to age or store it for a rainy day. "Pliny is for savouring, not saving" reads part of the text that borders the simply yet striking label. This beer relies on its hop character, which will only diminish with time.

My bottle has a bottling date of 16 January 2012. Yes, I should have drunk it straight away for maximum effect. Unfortunately, I had reached my beer consumption limit after meeting with Chris and Merideth and the next morning began our dry Half-arsed Febfast fortnight. So, Pliny's been keeping cool and dark in my fridge until last night (which just so happened to be at the end of a rainy day). 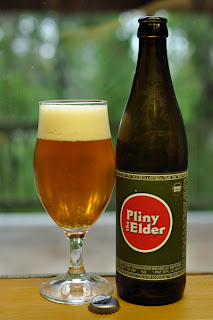 Yes, Pliny the Elder is awesome/beautiful/impressive/wonderful. However, this beer's brilliance isn't related to its big hoppy flavour profile. The use of Amarillo, Centennial and Simcoe hops actually provides a very familiar American 2IPA taste. It's a straightforward hop-smacking flavour that doesn't throw up any curve balls besides a common pepperish hit. Where this beer excels is in everything else: balance, body, complexity, length and finish.

Pliny the Elder has a balance and smoothness unlike any other American Double IPA that I have tried before. It looks spectacular, clear yet richly golden with a big thick white head.

The classic aroma of the style is instantly evident from the moment you crack the lid open.

Everything in this beer works perfectly in harmony. This beer is big and powerful in your mouth, yet the hop heavy mouthfeel is supported by a clean malt backbone. The alcohol is very well hidden in the beer, providing warm but zero alcoholic vapours or burn.

Despite its intensity, it is actually quite moreish. It's easy to drink yet provides everything a hop head seeks in a Double IPA.

So, does Pliny the Elder live up to expectations? Definitely. I can not fault it. My preference is for flavoursome yet extremely well made beers...and this beer is definitely that.

Those who are much more hardcore about American Double IPAs and more well travelled in experiencing such beers fresh may argue Pliny's place against other, more unique and characterful American Double IPAs, but I suspect few would fault its composition and drinking performance.

Well done Russian River and thank you The Beer Geek. I am very lucky...but now I desperately want to visit the Russian River brewpub, which will simply be out my reach for a long time to come. Maybe one day though...maybe. 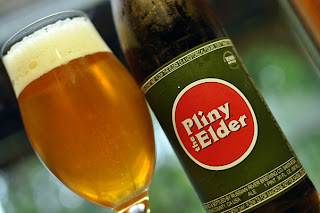 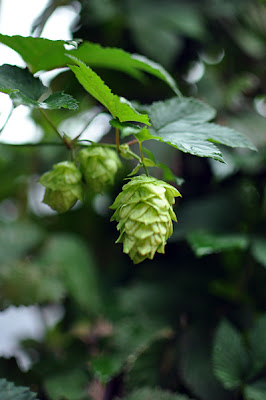