Well, haven't I been a bad blogger! Have I been neglecting my passion for Melbourne's bustling beer, bar, band scene? I seem to have missed a massive February with blogger essential events like National SLAM Day, countless large music and mini beer festivals, even yesterday's American Beer SpecTAPular at The Local Taphouse, as well as bar news aplenty.

No, not neglecting...I've just been far too busy with my full time job, maintain my property and keeping fit. So, apologies if you're a keen blog reader! The last two weeks also involved a commitment to Half-arsed Febfast, in which we completely gave up all alcohol (plus junk-food, chocolate, ice-cream and chips) to focus efforts on maintaining good health and in support of health and addiction awareness. We also needed to find a near gear to boost our running training as we prepare to run the 14.38km Run for the Kids and the 13.2km Puffing Billy Great Train Race over the next two months. This goal was best served by a dry two weeks.

Whilst I'd love to blog here every day, obligation free rainy days like today are so rare for me at the moment. I also continue to write for Australian Brews News, which takes some priority, so keep watch there!

Thankfully, just quickly, I have some free space today to share about an excellent beer day, as well as a little boast about a very special international craft beer that I consumed last night (...which made this post far too long, so I turned that into Part 2).

Yesterday, we had a sensational day as we returned to the essence of that which makes us such big fans of the local craft beer scene - visiting breweries with friends and enjoying beers over good conversation in beautiful settings. We returned to the scenic Mornington Peninsula for lunch at Red Hill Brewery, followed by a tasting paddle of Hix Beer at the Hickinbotham of Dromana winery and then more beers at Mornington Peninsula Brewery.

For the day we were joined by BJ Shelton from Milwaukee, Wisconsin USA. BJ is a bar owner, musician, blogger, craft beer lover and honourary Australia (his wife, Jess, was originally from Australia). It was great to catch up again with BJ, who shares a passion for exploring local beer.

First we shared lunch with BJ and Jess and Red Hill Brewery, which was busy as many sought to escape the rainy day after visiting the popular Red Hill Community Market. Good thing we had secured a booking earlier in the week! Once again the food, beer and service was spot on. The improved Belgian Blonde, the current seasonal, provided excellent drinking on a gloomy wet day. It even paired beautifully with my steak sandwich. The relaxed setting with fresh food and beer provided a joyus lunch session, as has been the case every time I visit Red Hill Brewery. They just seem to have the prefect brewery cafe formula there.

With Jess heading home to return to parenting duties, BJ, Jenn and I continued onto the Hix brewery at Hickinbotham, which none of us had been to before. The characterful winery cellar door was busy, but everyone seemed to congregating around the wine tasting area. The beer bar off to the side was empty, providing a quiet and relaxed space for the three of us to enjoy ourselves over a tasting paddle of the 5 Hix beers.

Already family with the three bottled beers (Pilsner, Pale and Brown), Hix also offerred two beers which I had not encountered before - an Irish Stout and their seasonal Summer Ale (a Steam beer). Overall the beers didn't throw up many surprises, but it is definitely a location I'd be happy to visit again. 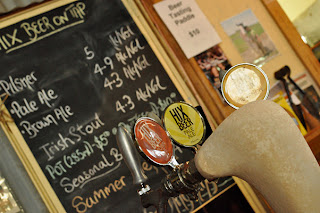 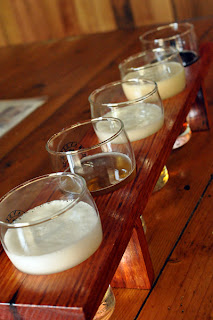 Sometime after 3pm we arrived at Mornington Peninsula Brewery. The rain was now pouring down hard as we took shelter in the warm brewery bar warehouse. MP's head brewer, AG, was just finished up a brew, a White IPA - a hybrid witbier India Pale Ale cross. It will be the first of the style to be commercially released in Australia, although Doctor's Orders will also be producing a White IPA in several months for the Great Australiasian Beer SpecTAPular during Good Beer Week). When his brewing duties were done. AG joined us for several beers. Dave and Karen Golding of Red Hill Brewery also popped in on their way home from a night in the city, leading to some insightful and entertaining brewer on brewer beery chat. There may have been an incident with a pillow-pet and a glass of Mornington Peninsula Imperial IPA.

I drank the Mornington Brewery Saison, which was lovely but didn't quite hit the mark of the three Saisons that I discussed in my last post. AG acknowledged that he wasn't overly happy with the Saison, with something not quite right lingering at on the back palate.

Horrendous weather continued to dominated outside, but it failed to attract from the good times inside, as the afternoon reaffirmed that craft beer people are good people - friendly and welcoming.

As the designated driver for a day, I kept my beer consumption on the soft side for the day, as I knew my reward was waiting for me at home...