Here's a new year's resolution for everyone who lives in or will be passing through Melbourne in 2012...visit Oscar's Ale House in Belgrave!

James Smith, beer journalist and driving force behind The Crafty Pint, has labelled Oscar's Ale House as one of the best beer bars in Victoria, primarily due to its extensive selection of local craft beers.

When I first walked into Oscar's, a few days after moving into the area, I knew within a minute that I completely agreed with Smith. More importantly, I was overwhelming happy with this bar that would now be my local. Just quietly, it was perfect...and I hadn't even had a beer. Pint please! 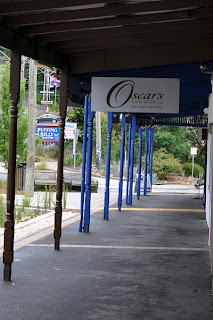 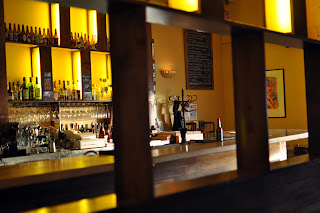 This little bar at the end of the train line is my saving grace as a new resident in the Dandenong Hills. For the last 10 years I had been living in the inner suburbs where craft beer is generally available by a short walk in any direction. Now our new home is 40km (an hours travel time) from the bustling craft beer and live music scene of Melbourne city. My expectation for finding a quality, friendly watering hole out this way was low.

This city-slicker blogger is now adjusting to unfamiliar hills, which require much effort to maintain a home, and a region lacking in plentiful supply of good beer. Thankfully my tree-change has been made somewhat easier by the short stroll to Oscar's. Less than 500 metres from my front door, this bar is my new local...and what a local to have! Few towns in any other direction over 40km from Melbourne are lucky to have such a good beer presence, but add to that the bonus of a bar with live music and good people in a beautiful environment...and it's a dream come true!

Oscar's Ale House was opened 3 years ago by Brad and Gypsy Merrit. It is located at the end of Belgrave's main street, metres from the railway and bus station and the entrance to Puffing Billy. The Merrit's bar brings together three passions that I raise my glass to - music, art and most of all...good beer.

For Brad, running Oscar's is a lifestyle, not a venture in profit or market chasing. The Californian native and his Aussie wife (a Dandenong's local) have swapped corporate city life in favour of providing a quality social hub for their local community. At Oscar's, named after one of the Merritt's dogs, Brad does things his way (in the best way possible) and he loves it. The success of Brad's ethos shows in the welcoming and easy-going vibe of the place. 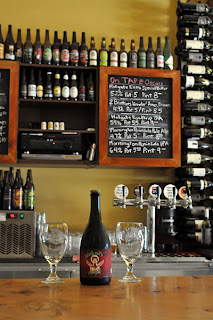 The bar consists of three sections where patrons gather: 1. inside the main bar, 2. out the front along the pathway seating and 3. the small enclosed beer garden out the back.

The main room is showcased by a large wooden dogleg bar surrounded by comfy stools. About 14 people can sit at the bar, which is a great size and location for consuming your time at Oscar's. Much to my delight, for when I'm there alone, there's a good stack of street-press and beer books (such as Garrett Oliver's The Brewmaster's Table) to be found at the end of the bar. Alternatively, one can just stare almost endlessly at the rows of empty bottles that fill the roof-high shelves of the back wall.

Behind the bar you will find 5 draught beer taps pouring some of Brad's favourite local craft beers. Currently on tap are the Holgate ESB and "Road Trip" IPA, Mornington Peninsula Brewery's Pale Ale and IPA and the 2 Brothers "Growler" American Brown Ale.

On the lower-side behind the bar are fridges filled with a fine selection of craft beers. The bottled beer list covers all styles and flavours from across the local and international craft beer market. There is a list of regular bottle beer stock printed in a menu book, which also includes local ciders (no macro-swill cider!) and local wines, plus standard spirits and the bar's own cocktails.

A rotating list of new beers is clearly printed on two chalkboards either side of the bar (one for Australian beers and one for international/imported beers). 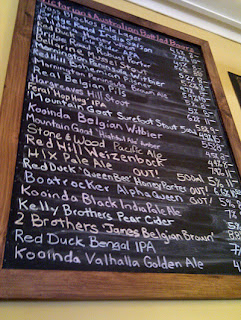 No shortage of choice at Oscar's!
The main section of the bar provides several booth-like couches facing across tables, which makes for easy and comfy conversation over drinks. 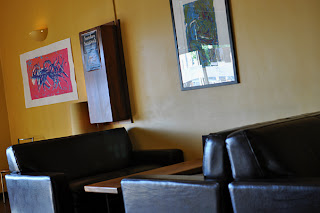 At the back of the bar is a small yet spacious beer garden. The enclosed but roofless space sits on top of an elevated deck and is shaded by a large umbrella.

There's no kitchen at Oscar's but they do sell food to accompany good beer drinking. On the menu are 3 cheese plates, a tomato & basil bruschetta and gourmet cheesy toast.

If you are seeking something more substantial, the staff are happy for you to BYO take-out, with a number of local pizza and take-out menu's available next to the bar. Alternatively, it's a short stroll to the various food shops and restaurants in Belgrave. 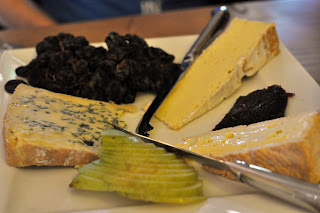 The Delicate cheese plate.
The other key feature of Oscar's is the arts. The venue regularly hosts art exhibitions and features live music across every weekend. The front corner of the venue is setup as a performance space for quality local acts, often from the blues/roots/alt-country genres. Brad is an experienced band-booker from his time working at bars in America, so he has a good ear for talent and finding acts that suit the venue.

It's a fine little venue for enjoying a free gig over good beer...a perfect match! 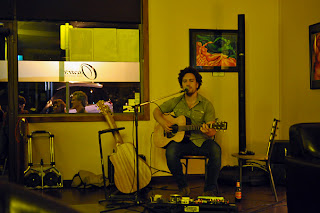 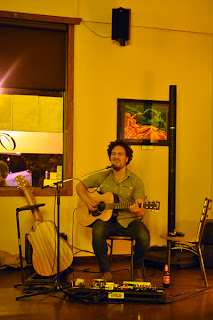 Josh Owen is a favourite at Oscar's.
Oscar's Ale House is simple and elegant yet characterful. However, the real character and enjoyment is found in the people that fill the bar...staff, locals and visitors.

The first few times I visited Oscar's I was hit by the quiet joy of seeing so many people drinking excellent craft beers.  It's just not something I expected to see out in Belgrave. Misguided was I!

The bar brings in a regular crowd of locals who have had palates for better beer developed by Brad's selection. The empty bottles that line the bar are often new release craft beers that cost over $20 per bottle. Then there are the occasions when women come up to the bar during early summer and ask Brad if he currently has any stouts on tap...and I just want to high-5 everyone because she didn't ask for a cider or white-wine spritzer, as is too common in the city. Yes, women do love stouts and porters.  This is how beer should be.

Naturally, there are those patrons who are not into craft beer and prefer to stick with the bland macro lagers or big brand spirits, something that is completely expected in this area, but their presence simply confirms that Oscar's is a choice local for everyone and anyone (unless, of course, you're a dickhead...that's a given).

Brad is a homebrewer, hop head and lover of big and crazy hybrid style beers, but he understands the (unfortunate) need for mainstream lagers in Belgrave, so he stocks James Boags Premium Lager and the marketing bullshit that is Doss Blockos, which plenty of locals drink. I am keen to see the sadly popular Doss Blockos replaced by a genuine Aussie craft Pale Lager, but it’s not an easy task finding accessible craft lagers that have the same appeal to the uneducated or misguided, the hipsters, the unadventurous and other dedicated mainstream drinkers.

The prices are good, exactly what I'd expect to pay for everything at a good bar (between $8-$9.50 for a pint of craft beer)

At first it was a surprise to me that Oscar's is often quiet, but that is no problem for the Merritts and their staff. Out here we're not in the city where an almost empty bar can be a sign of a failing business or an unwelcome domain. There is no need to pack this bar every night to make it viable. Oscar's is a labour of love. The occasional low attendance is also not a problem for me (I have been the only person in the bar several times) because I'm not the most social of animals. I enjoy being able to just sit at the bar by myself or with Jenn and lose a few hours over a couple of pints. Still, my former city-self says...this bar is so good that it should always be packed! Ok, yes, the quietness is the nature of the area. Belgrave does not have the rich population and bubbling 24/7 culture of the inner Melbourne suburbs. My new hometown is in the quiet hills, full of families and baby boomers, where having a local is common but revolving your life around visiting the trendy hot spots and making them rowdy is not (hooray!). Oscar's definitely has it's busy times...with the bar staff having all hands full late on most Friday and Saturday nights. Nonetheless, I would love for more people to discover Oscar's Ale House.

Oscar's is accessible, cosy, friendly, full of beer choice and diversity...and just a great place to discover out in the hills. Come find me there! 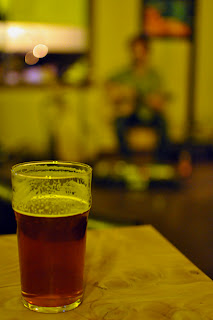 For the best insight into Oscar's, check out the two articles on The Crafty Pint: