Warning: Don’t read on if you’re not interested in or do not appreciate some macro beer bashing.

Victoria Pale Lager...what the hell is the point of that?

I see no purpose for this beer other than marketing and therefore big-business money-making (which is never good for your average person trying to get the best out of life). Can anyone please prove otherwise?

As a beverage, you are better off drinking water becausea this pale lager is as bland as water and water is better for you.

As far as I can tell, Victoria Pale Lager is just the failed VB Raw repackaged. Raw was the previous “low-carb” attempt by Fosters to endear their Victoria Bitter (VB) brand to the ill-informed Pure Blonde/Hahn Super Dry/Boag's Classic Blonde drinking generation.

Packaging is what the new VB Pale Lager is ALL about. The media, marketing and "hype" around the release of this new beer seems to have only been focused on the fancy label-embossed bottle, manufactured by O-I.

Does this indicate that Carlton United Brewers (CUB) slash Fosters Group believes the shape and novelty embossing technology of this bottle alone is enough to sell it and convert regular VB drinkers? Has humanity lost all ability to pass judgement using any sense other than sight? (Also, arn't they just stealing their own market away from themselves by converting VB drinkers?!?).

According to business analysts, Australian beer sales are in heavy decline, expect in the craft beer sector...which is mostly likely due to the rapid increase in microbreweries and craft beer output over the last few years. There is more craft beer on the market then ever before, hence there are more sales of such products.
Nonetheless, CUB have attempted to counteract the decline in mass produced lagers by...creating another mass produced lager to compete with the declining rest.

Here's a snippet from an article that appeared in the Fairfax newspapers this week ('Wine soars as beer goes flat' by Rachel Browne 11/12/11):

Firstly, I struggle to believe that "head of insights" (or even General Manager Consumer Insights at Fosters Group according to LinkedIn) is a real job. Secondly, they clearly have zero consumer insight if they are producing another in-decline low-carb lager when it is the craft beer sector that is on the rise. Why, Fosters, did you not channel the resources and effort that has been wasted on Vic Pale Lager into Matilda Bay?

Yes, Matilda Bay Brewing Company has also just been pumped up with the opening of their new brewery and bar in Port Melbourne, which will lead to Matilda Bay branded brewpubs opening across the country. However, their underrated and underresourced Bohemian Pilsner, Big Helga Munich Lager and Redback Wheat beers all make the need for Vic Pale Lager completely obsolete. They may not be the best craft beers around, but they are beers with flavour and character. More importantly, they are readily accessible to almost everyone through the nationwide distribution of Carlton United Brewers.

Maybe Fosters could throw at me some impressive (yet awfully cherry-picked) sales figures to show the infant success of Victoria Pale Lager. However, nothing can deny that such a poor taste and enjoyment experience from this beer can signify anything other than a soulless money-making product.

I give Vic Pale Lager another 6 months before it is discontinued for some typical corporate reasoning such as "we've decided to refocus on our core range that our customers are passionate about and blah blah blah..."

More so, I suspect this is inevitable due to the recent SABMiller takeover of Fosters. Vic Pale Lager will become a "victim" of the company's reshaping as an international faceless brand with flagship output of VB, Carlton Draught and Crown Lager. Fail.

Ok, these days I don't comment or pass judgement on a beer I have not tried.

Yes, my curiosity over the existence of this beer lead me to buy one on a recent weekend. We were staying at a beach-side holiday home and it was a sunny Saturday. Dinner was fish and chips on a deck with beer. 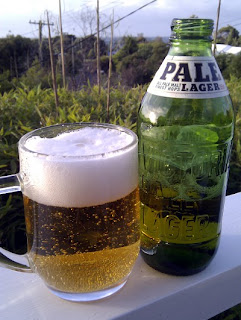 Surely any lager can be redeemed when consumed with fish'n'chips by the beach on a Summer's evening? But no, the Victoria Pale Lager was hardly worth finishing. Thankfully, we had a supply of the delicious Red Hill Brewery Bohemian Pilsner to wash away the bad beer. Now that vibrant Boh Pils is an excellent lager accompaniment for fish'n'chips!

The Victoria Pale Lager was flavourless and lacked any body or finish. It was simply...bland, boring and even something unbalanced. It was not crisp or refreshing. I cannot think of any reason for drinking it.

If these are your type of beer and your beer choice is generally limited to big chain outlets, then please at least consider drinking something Australian owned or from the craft beer industry, like Stone & Wood Lager, Coopers Clear or maybe even the Grand Ridge Brewery Draught.

As for me, I'll be heading back to our local Duncan’s for more Red Hill Bohemian Pilsner and some Epic Lager. Mmmm good soulful lagers!
at 7:04 PM