Beer and Bands - Australia Day and the Hottest 100s

Today is Australia Day...a public holiday for celebrating all things Australia (...I think. It tends to be a fairly ambiguous holiday).

In my social circles of Aussie "young ones", we love to use the day to share beers, barbeques and music with mates.

For many of us, the celebrations surround the TripleJ Hottest 100 countdown, a radio poll of the top voted songs from the previous year, which has been running since the 1980s. The broadcast began at midday today and is currently rocking out of various radios throughout our home and backyard. Traditionally, my voted songs never do well in the Hottest 100 poll. However, if any of the above songs are played...I will be drinking a quality Australian craft beer to celebrate! CHEERS!

On the other side...here are my (mostly unfortunate) predictions for the actual top 10:
The other top 100 poll released today is The Local Taphouse Hottest 100 Australian Craft Beers. This poll has been running a couple of years now...and looks to have been hijacked a little by Social Media driven campaigns of marketing savy breweries...hence the win by the McLaren Vale Ale...maybe. However, it is still a relatively good indication of which craft beers the wider Australian community is currently drinking (mainly due to distribution accessibility).

The full list was released at about 11:00am today...and can be found on the Local Taphouse blog at: http://thelocaltaphouse.blogspot.com/2011/01/mclaren-vale-ale-gets-most-votes-in.html

(Through my beer journey of the last 3 years, I have tried almost every beer on that list now, with the exception of about five.)

My 5 available votes went to... 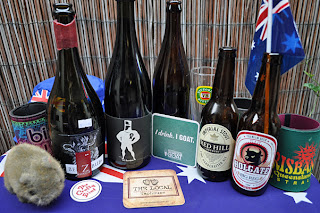 And here are some more awesome Aussie beers that I enjoyed over the last year...and would have loved to included in my shortlist... 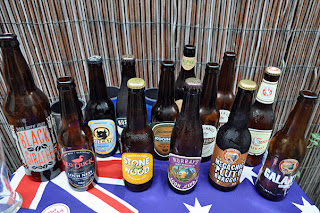 More info about the Local Taphouse Hottest 100 is available on The Crafty Pint website at: http://craftypint.com/news/post/the-hottest-100-revealed/

And for a quick analysis of the results, check out the Australian Brews News article at: http://www.brewsnews.com.au/2011/01/australias-top-100-announced/

It is not really beer drinking weather today, here in Melbourne, with cloudy skies and the temperature barely nudging 20 degrees. Nonetheless, we are enjoying several of the top rated Aussie craft beers from the Local Taphouse list - such as the Little Creatures Pale Ale, Stone and Wood Pacific Ale, Mountain Goat Steam Ale, Murray's Icon 2IPA, as well as Holgate Mt Macedon Ale.

Lunch is another beer-can-bbq chicken, time time using the only can of beer we had lying around...and maybe the most familiar Aussie macro beer - a VB.
at 12:50 PM