With Brisbane practically a second home to me now (since marrying a girl who I stole away from Queensland’s capital), it is comforting to discover much craft beer goodness starting to quietly appear in this town.

Lead by a few intelligent and feisty people with a serious passion for good beer; there is a very small but clearly positive and influential movement towards better beer happening around Brisbane. (Check out: Good Beer Lunches, Innspire, Necter Beer and Wine, Scales and Ales, 4 Hearts Brewing.)

The tradition of drinking "thirst-quenching", mass-produced and generally flavourless big name beers - such as XXXX, VB, Corona, as well as plenty of mid-strength and low-carb beers - is still very much ingrained in the Queensland population. This is most likely due to the excessive contract stronghold that the macro beer companies – Fosters and Lion Nathan – have on the pubs, bars and venues up here.

Nonetheless, the beer drinking culture and easy going nature of the community hopefully lends itself to new experiences over a good long session of social drinking. From what I have seen, Brisbane has the potential to become a craft beer hot-spot within a few years, possibly well ahead of Sydney.

One venue that is visibly flying the flag for craft beer in Brisbane is Archive Beer Boutique and Bistro in West End. My wife and I visited Archive for a quick lunch last week.

The space and vibe of Archive appealed to me from the moment I stepped into the building, with its characterful and causal atmosphere, unique “books and beer” theme and spacious rooms. 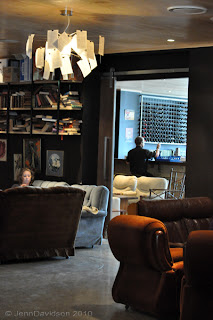 The main bar area has a good number of high tables and chairs, throwing the focus straight to enjoying a beer with mates.

Two pool tables sit side-by-side under funky lights made up of lamps, which look like giant robotic insects. Other room lights are shaded by book pages. Awesome! 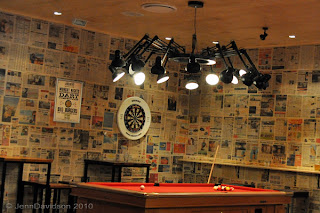 The walls surrounding the pool tables have been covered with old newspapers, many of which have been hilariously graffitied (in the lowest form, of course) by various - probably drunk - pool players over its short lifetime.

Without being excessive, there are plenty of unique features to capture your gaze and imagination throughout the bar, which is the type of character I love in a bar.

On the other side of the room there are a number of couches and chairs for sharing drinks in lazy comfort. The walls are lined with book shelves, filled with random books and several empty case boxes from Australian craft beers. 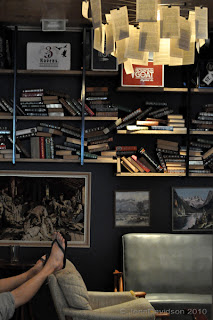 Archive's large bar is appealing, with eight draught taps grouped together across an arch. On shelves behind the bar, a range of bottles, spirits and random beer items are neatly displayed. 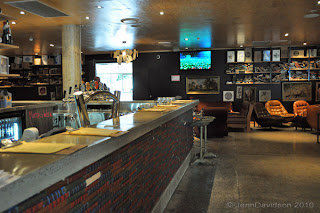 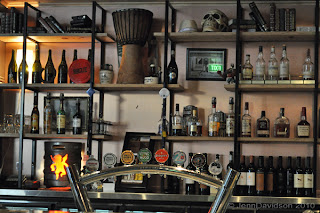 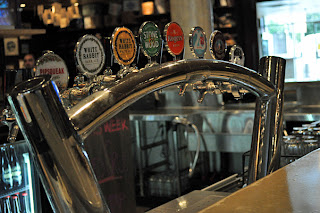 I went with a pot of the one beer from the draught selection that I was yet to try – the Burleigh Brewing Co 28 American Pale Ale (perfectly priced $4/pot).

Whilst I have no time for the clearly marketing-driven Big Head "no carb" beer, the tap range is perfectly approachable for the local crowd, allowing for the hot climate and relatively inexperienced craft beer crowd. Although, it would be nicer to see a wider range of microbreweries supported with taps.

The 28 Pale Ale was straightforward, not overly tasty, but definitely drinkable. It suited the hot weather and matched my mushroom burger (with chips) just fine. Ultimately, it is an excellent draught lager alternative (for the XXXX and VB drinking locals) and a gateway craft beer for those not quite ready for the hop hit of other local APAs, such as the Little Creatures Pale Ale. 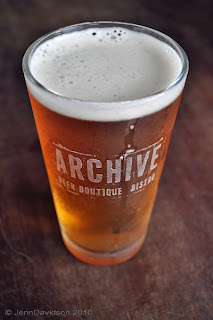 The bottled beer menu at Archive is wonderfully expansive and holds only Australian beers. It is ordered by beer style and the prices are reasonable for most of the list (especially when the majority of the beers have had to travel from opposite ends of the country). Archive’s fridges also hold a number of special small batch releases – such as the Mountain Goat Rare Breeds, Bridge Road's B2 Bomber and Murray's Anniversary Ale – which are much more pricey. For example, $45 for a 330ml of Murray's "Wild Thing" Imperial Stout seems excessive, considering Melbourne bottle shops sell it for $15!

As a Melbournian, where a growing number of speciality beer bars and shops have been readily accessible to me for some time, Archive's beer selection did not offer any surprises. However, for most Brisbane locals, these beers must be something of a revelation. More importantly, the support shown for Australian craft beer is very satisfying.

Unfortunately, I did not have the time to stick around talk to the bar staff about how well any of their beers sell and how often their tap beers change, but will be keen to head back sometime and find out more.

(Also, I had an hour drive to regional Queensland ahead of me. Therefore, I limited myself to just one beer with my lunch and hence could not really gauge what a good drinking session at Archive would be like.)

My time at Archive was far too short and it is hard to judge the true ambiance of a place when you are there at 3pm on a Tuesday afternoon. Therefore, I will be keen to return some day soon for a good beer session, when the place is alive. I am also keen to try out their weekend breakfasts.

On first impressions, West End has a very "Melbourne feel" to it, with loads of sweet little cafes and shops…or is that just because we kept seeing Melbourne originating businesses such as Grill’d, The First Pour (Veneziano coffee), The Hi Fi Bar? With these features and a beer bar like Archive, you could almost be forgiven for thinking you had been suddenly transported south of the border.

After visiting the tired looking Fortitude Valley the previous day, I also have the suspicion that West End will one day (soon?) replace The Valley as the true destination for arts, culture, youth and live music in Brisbane.

Whilst Archive Beer Boutique and Bistro is far from a beer nerd heaven, it is definitely what Brisbane needs at this stage...and probably the closest this the area has to Melbourne's Royston Hotel.

Places like Archive will need to take a punt on various producers and suppliers, where the dollar will not be always be a winner…but it will open a gateway to better beer, experiences and culture.