This weekend I found myself in possession of a yet-to-be-released (hence the labelless bottle) Grand Ridge Brewery Mirboo Midnight barrel-aged Dark Ale (thanks Slowbeer!).

Following on from the Mirboo Madness American Red Ale released earlier this year, I am excited to see more innovation coming out of the grandfather of Victorian microbreweries. The long established range of beers from Grand Ridge Brewery has stood relatively unchanged for some time now...and hence possibly suffered a little from the recent influx of amazing local craft beers, providing new and unique styles and redefining the standard for local brewing quality and taste.

Therefore, I had begun to feel that Grand Ridge Brewery was unfortunately being left behind in the Australian beer renaissance, finding their beers somewhat underwhelming and even a little rough (with the exception of the very rich and enjoyable Supershine barleywine).  Even the initially awesome Moonshine scotch ale has worn off on me recently.

I believe the Mirboo Midnight may mark a return to form...

Pouring the Mirboo Midnight from a 330ml bottle into a tulip glass, this beer possesses an impressive appearance - deeply dark black with a beautiful big, frothy, tan coloured head. The head held quite well and left plenty of thick lacing as it slowly reduced.

The flavour is rich, driven by the bitter chocolate and classic malty Grand Ridge taste (similar to Little Creatures, I find that the Grand Ridge beers all share a very distinct "Grand Ridge character" across their range). I am not inclined to describe it as a "complex" taste, but there is enough going on in this beer to keep a craft-beer lover happy, thanks to the barreling of the brew.

With a full body and medium carbonation, the Mirboo Midnight provides a lovely long palate and a good clean finish. It is well balanced and the 6.5% alc/vol contributes nicely to warming Winter Ale style.

Still probably not a sessional beer, but definitely the most enjoyable beer I've had from Grand Ridge Brewery since the Supershine. The barrel-aging is clearly the key to this beer.


Yes, this is an excellent beer from Grand Ridge, maybe still a little of the top of range big and bold local craft beers of recent months, but it has restored my faith in this brewery. Hopefully we will continue to see more seasonals from them, such as this. 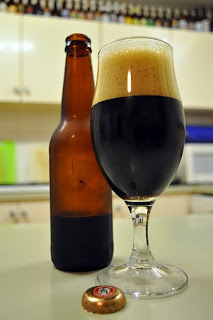 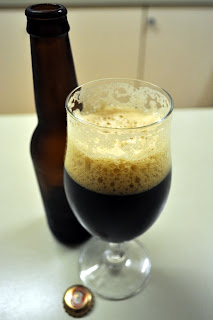 I understand the Mirboo Midnight may be available this Saturday during the AFL Grand Final and Grand Ridge Brewery Showcase at Mrs Parmas (event info HERE via The Crafty Pint website), which my wife and I have booked a spot for through the afternoon. Would love to try this out on tap, but I suspect it will just be the bottled version available as a prize during the event. If anyone finds it on tap...please let me know!
at 5:16 PM