Today, the last Saturday in September, marks the pinnacle of sporting fever in Melbourne with the AFL Grand Final being played this afternoon.

Many will try and ignore it or be "so-not-into it", but it is nearly impossible to avoid the hype and discussion flowing across this football loving city. Back-yards and parks across the State will be buzzing with the sounds of families and friends gathering and bbqs sizzling, as well as beer stubbies and cans being cracked left-right-and-centre!

This year the two teams playing off in the Grand Final are the Collingwood Magpies (the most populously supported team in Victoria, as well as the most loathed team by anyone who does not follow the 'Pies, such as my self) and the long-suffering St Kilda Saints (who have not won a Premiership since 1966).

As a life long supporter of the Essendon Football Club (who enjoyed success a decade ago, but have been lingering around the bottom of the pack for too long now), this year's game will not quite evoke the full wrath of passion from me. However, my bride is a keen St Kilda Football Club supporter (a surprising but welcome discovery when I first met her...considering she was born and bred in rugby-centric Queensland and had been following the Saints since her school years...not just jumping into AFL when trying to win the favour of a strapping Melbourne boy who she was crushing on). Therefore, by proxy, I am ALL ABOUT THE SAINTS! (At least St Kilda's Red, Black and White colours and close enough to the Red and Black colours of my Essendon Bombers!)

Of course, around here...when there is sport, there is beer. Unfortunately, that normally means a slab of Carlton Draught or, even worse, Tooheys Extra Dry (the industrial macro-brewery lagers which offer little more than a harsh amber liquid, which smells like "beer" and tastes like chemicals, then hurts your head). On the flip, thankfully in Melbourne the passion craft beer is starting to show signs of one day being as big as the footy (...we can only hope!). Therefore, there are plenty of quality craft beer options now readily available all around town, to improve your Grand Final watching experience.

To cheer on this event, here is my suggestion of Victorian craft beers for St Kilda fans to beer-theme their weekend with their team colours of... 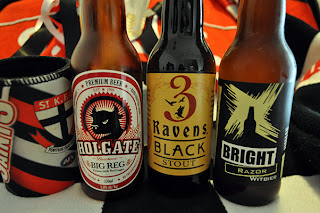 Alternatively, here's a few more awesome locals that nicely fit the colour theme and are worth tracking down... 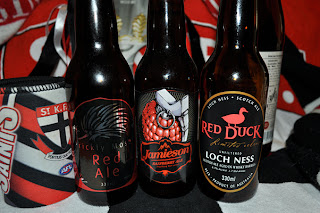 And finally...although not an Aussie craft beer...the one I recommend most to Saints fans this weekend is the fantastic 5am Saint Amber Ale from Scottish (mad)brewers, BrewDog. No only is the Red, White and Black label perfect for your team...this beer is beautifully balanced, sessional, and...drinks like victory! 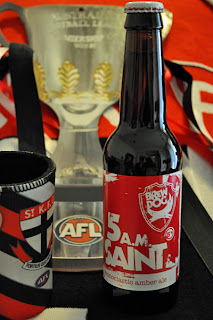 Go Saints!
Our Grand Final Day will involve watching the game from inside Mrs Parmas, so we can enjoy the match on a big screen, with a footy-loving crowd in the heart of Melbourne, along with a brilliant range of Victorian craft beers on tap - including a showcase from Grand Ridge Brewery - which will help us celebrate or commiserate...whichever way the game goes.

And then...if victory comes our way...we'll be heading down to Federation Square for the winning team player presentations...which may also include a quick stop into Beer DeLuxe, where the new Murray's Brewing Imperial IPA "Spartacus" will be on tap (which I may have had a very special sneak peak of last night...and YES...I believe it DOES kick ass!). Oh, and I wouldn't be surprised if we end the day at The Royston.

If you are looking to do the same, a list of Melbourne beer-bars showing the footy on big screens can be found on The Crafty Pint Events page at: http://craftypint.com/events

As well as today's article, which wraps it all together at: http://craftypint.com/news/post/grand-final-great-beer/
at 10:18 AM