The Wesley Anne is a beautiful bar. The former "House of Assembly" church, which was built in 1854 (a mere 20 years after the European settlement of Melbourne), still retains plenty of its original aesthetic, providing a warm, old-world charm.

Stepping through the large, welcoming front entrance, you are immediately drawn to look up at the exposed brick and wooden rafters under a high corrugated iron roof.

The candlelight ambiance sets a relaxed tone and the interior makes you feel like you're in a rural town rather than suburban Melbourne.

A very large L-shaped bar dominates the front section, providing a tap and bottle beer selection that is very well suited to any keen beer drinker, as well as your casual drinker.

On tap I found Mountain Goat Steam Ale, Little Creatures Pale Ale, Coopers Green (Pale Ale), Guinness, Boags Draught and Pipsqueek Cider. The bottled selection is dominated by Montieths, James Squire and Coopers, as well as a number of random internationals. Also nice to see the local White Rabbit dark ale available there, but I'd struggle to pay $8 for it.

Oh...and with the often dingy-rock appeal of the Northcote music & arts scene, I have no problem seeing VB and Melbourne Bitter available as well. You've got to know your crowd! The wine list is also extensive for such a bar and there is also a full selection of the usual spirits.

Out the back you will find a spacious open-air beer garden, with a fire place and several large umbrella-covered tables. The brick floor and walls give the garden a somewhat "cosy" feel. It is actually exactly like the type of space I picture in my mind when I think "beer garden".

The Wesley Anne bandroom is a classic case of "let's-make-this-a-bandroom" not done very well...which I actually love because it sets up a lazy lounge atmosphere where you will never find Bieber-esque hype amongst the crowd. However, it does make the flaws more evident.

The bandroom is filled with a messy arrangement of couches, benches, tables and chairs in varying shapes and sizes.

The sound system is clearly not the best, which is a shame. From my seat right in the centre of the room, the sound was unbalanced, with a constant hum-buzz and the occasional static A let down in such a pretty setting.

Although, such a poor sound system can help shine a light on true musical talent. If a band/artist can overcome issues created by equipment and rely on their skill to manually produce the sound they need (as was done by the band we saw on the night, The Holy Sea), then that is the mark of a quality band/artist.

Another sound problem was due to the open bandroom door, causing too much stereo music from the front bar to infiltrate the bandroom during the performances.

Thankfully, the completely "relaxed" nature of the venue and the gig seemed to counteract the sound problems to an extent.

The Wesley Anne patronage seemed to be very typical for the Northcote area (think arty-students, generally well or trendily dressed). And if I may mention...the uni-sex toilets provide some quality reading/entertainment courtesy of the graffiti.

I really like the Wesley Anne, definitely another Northcote gem. It has character and class, yet it's dingy enough to avoid pretension. It gives space and exposure to new/upcoming/varying music and the arts...just don't expect the most delightful of listening experiences. Thanks to their very low (often free) door prices, Wesley Anne is the kind of place you can go to discover new music and artists.

Finally, random little things tend to thrill me in places like this. In the Wesley Anne’s case it was their choice of glassweare for serving pots of beer. They use cute "mini-pint" glasses – a 285ml pot sized glass in the shape of a classic pub (British Imperial?) pint glass. Something different to the norm...and that charms me.

For some insight into eating at the Wesley Anne, head over to my fellow bloggers' review on Eat Drink Stagger. 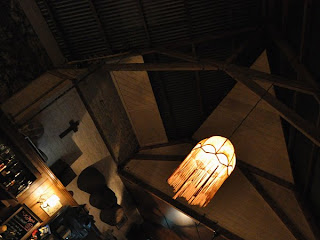 Looking up at the Wesley Anne's roof. 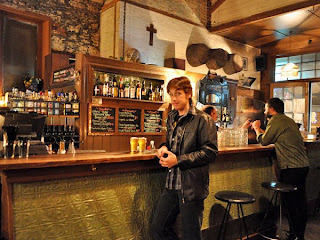 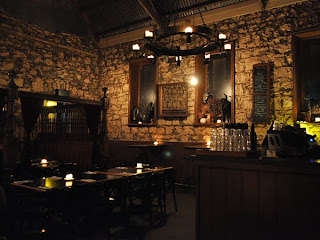 At the back of the main bar there are dining tables and booths. 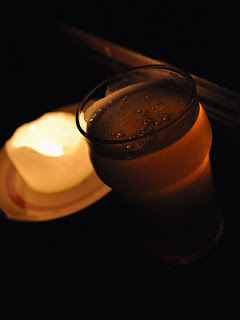 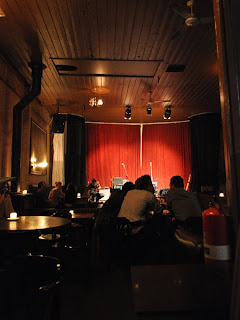 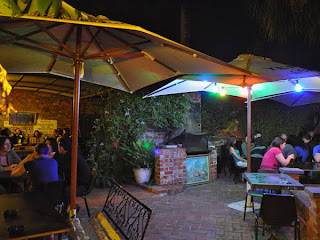