Redoak beer is a quandary. This small independent craft brewery, with it's Redoak Boutique Beer Café restaurant located in central Sydney, has many highly regarded and interesting beers that (in my experience) seem to rarely perform when purchased in bottles.

Redoak has a plethora of beer awards to its name. They even declare themselves to be "Australia's Most Awarded Brewery" (along with a couple of other breweries who make the same claim, such as Grand Ridge in Victoria). Some people suggest Redoak wins so many awards simply because they enter so many beers into countless competitions. Weight in numbers. Nonetheless, Redoak has scored 3 World Beer Cup Gold Medals and they were they 2008 AIBA Champion Small Brewery, which can't be done without seriously good beer (...you'd hope).

Beyond the awards, the man behind Redoak, David Hollyoak, seems to divide colleagues and affiliates in the beer industry with his opinions on running a microbrewery business. The outspoken advocate for local, small independent craft beer is also the driving force behind the Australian Real Craft Brewers Association.

Many have also labelled David to be something of a Willy Wonka, eccentric and very secretive about his brewery (very few seem to know the actual location of the Redoak brewery) and his brewing methods. He is a prolific brewer, producing many different styles and speciality beers from a supposedly small brewery, yet it is still capable of supporting natural distribution for several of his beers.

Two Red Oak beers, Organic Hefeweizen and Organic Pale Ale, are distributed nationally through the major chains of Dan Murphys and Vintage Cellars. However, whenever I have bought Redoak beers from Uncle Dan's or VC, the beers have been infected...without fail...every time. When it comes to craft beers purchased from Dan Murphy's, faults don't often surprise me given the amount of time these untreated, preservative and additive free beers spend on warm shelves under bright lights. But with Redoak, it is a common issue that seems to always come up when talking about their beers with other local craft beer lovers.

My first experience with a Redoak beer was the glorious Christmas Cheer, a complex dark spiced Belgian ale that reminds you of Christmas pudding. I picked it up along with several other Christmas themed ales from a specialty beer shop not long before Christmas 2008, early in my craft beer journey. On that occasion it was a joy to drink, for my young palate. However, I had not seen it in a shop since.

Hence, it was to my surprise to spot a single bottle of Christmas Cheer in the fridge at Mayerling Cellars (a Duncan's branded drive-thru bottleshop) in Ferntree Gully. I had no idea how long it had been there (especially since I don't ever recall seeing it on previous visits) but I bought it without hesitation in hope of being reminded how good this beer was. I was also thinking..."surely such a small batch seasonal release such as this would not suffer the same infection issues." 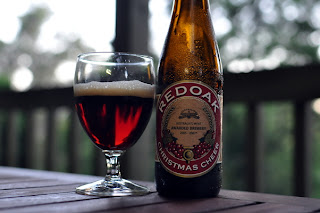 Well...the Christmas Cheer looked fantastic when poured, with a brilliant dark red hue and creamy tan head, but as soon as the bottle was opened I could tell this beer was infected. Damn.

I'm not sure if it was Brettanomyces, which can actually be quite favourable these days given our recent dalliance with lambics. This infection was more of a pungent sour green apple aroma. It really destroyed the beer, which did not display the full body I recall when tasted in 2008.

Who knows where the problem lies, but the consistency of the occurrence seems to indicate that there's a problem with bottled Redoak beers that are shipped south to Victoria.

And so my aversion to Redoak continues. I'm not one to readily diss any beer these days without good reason, but the continued disappointment has made this issue worthy of a blog post. Maybe readers will set the record straight for me and share their experiences on the contrary...?

The problem is that I've never had a Redoak beer on tap...and maybe that is where they perform best? I hope that some day not too far away I will have the opportunity to visit the Redoak Boutique Beer Café in Sydney and taste these beers fresh from the "source". Traveling to the beer's home, where it will always be treated and served as the brewer intended, may be the only way to discover how good the Redoak brews actually are. It's the best way to enjoy any craft beer! Until then, I may be giving bottled Redoak a miss.

I'd love to know if anyone outside of NSW has had a good Redoak beer in the bottle?
at 5:49 PM