Pale in Comparison (The Session no.64)

The Session is a monthly event for the beer blogging community, which was started by Stan Hieronymus at Appellation Beer. On the first Friday of each month, all participating bloggers write about a predetermined topic. Each month a different blog is chosen to host The Session, choose the topic, and post a roundup of all the responses received. For more info on The Session, check out the Brookston Beer Bulletin’s archive page.

This month's Session is hosted by Carla Companion of The Beer Babe. Her chosen topic: Pale in Comparison.


"Whether American (typically a bit hoppier) or English (a little more malty), these brews can be complex, interesting and tasty, and are all too often fast-forwarded through in a tasting or left as the 'eh, guess I'll have a pale ale' decision.

Hello June. Hello Winter. This is my second contribution to The Session. Since I love this blogging concept so much, I am happy to look past the local dark beer season and join our summery good beer lovers of the northern hemisphere in this celebration/dissertation of the Pale Ale.

Pales Ales are the balanced simplicity of good beer. Water, hops, malt, yeast...all there, all working together. They are as diverse as red wine and as surprising as a first date, even when rediscovered.

The Pale Ale is alive and well across Australasia. Our craft beer market is still young, so the Pale Ale is yet to reach the "eh, guess I’ll have a pale ale" stage, which would be a rather welcome sentiment around here. 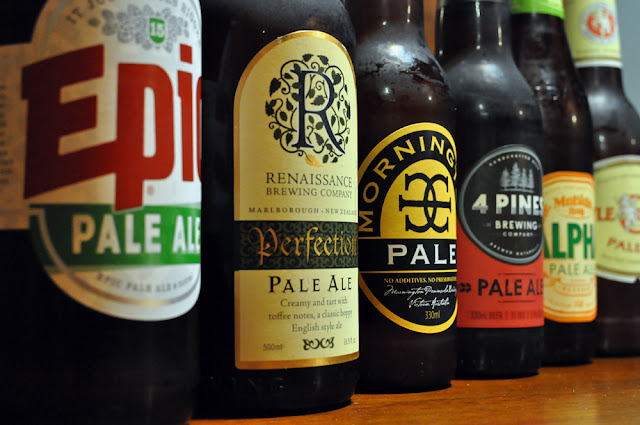 Pale Ales are the crafty session beer. They're the beer to hand to a mass-produced-lager drinking mate with the simple instruction, "try this". At the same time, you can hand that exact beer to your beer-nerd buddy who needs to be refreshed. Your palate wrecked hop-head counterpart will appreciated the original experience of a classical easy beer that still offers something more than a golden beery liquid featuring alcohol.

So often the "gateway" to craft beer, the Pale Ale is a bland-lager drinker's introduction to the wonderful world of hops. And where does one start when developing a palate for hops? Why, Cascade of course!

There are some excellent distinctive/characterful/smashable/write-about-able pale ales pouring across Australia. Instead of picking an obscure, recent, beer-snob agreeable Pale, I decided to revisit and explore the two beers that opened up this modern style to our land down under. Now regularly available to the majority of the country, these are beers that everyone can enjoy and surely appreciate.

On a world scale they may pale in comparison, but these two beers definitely do not lack importance or significance in Australia's good beer history: Little Creatures Pale Ale and Matilda Bay Alpha Ale. 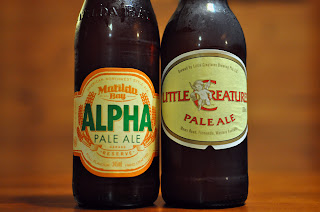 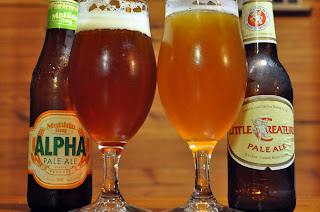 The same but very different. The Cascade hop is a common tale in Aussie brewed pales. Both of these feature Cascade predominately. Other than that, as you can see, Alpha and LCPA are very different beers.

Little Creatures Pale Ale is a cloudy-to-transparent orange-to-straw colour with a healthy white head. It washes through your mouth easily, with a plentiful but not smacky hop hit thanks to the delightful Galaxy hot, medium-to-high carbonation and a light body. It looks and drinks like beer...but gives you flavour, character. As many have said, it was the beer the popularised the American Pale Ale in Australia following its birth in the year 2000.

Little Creatures Pale Ale is what I wish the default pub beer was in Australia (...but we still have a very long way to go before the rancid Carlton Draught and XXXX Gold give up that title). It is a beer of it's homeland...by the beach of Fremantle. Drink this beer, several of them, whilst enjoying fish & chips by the ocean. Rightly polled within Australia's top 3 beers for the last three years...this is a sessionable no-brainer, delight. 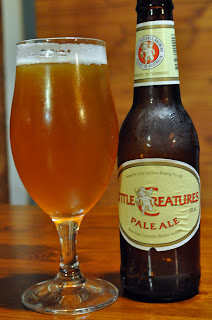 Matilda Bay Alpha Pale Ale is a malty beast for just the right amount of bitterness to recapture your interest after the first four mouthfulls. Redish-orange in colour with a creamy white head, the big aroma provides an initial hit of sweet malt followed by fruity and citrus hops. Alpha is inspired by the pales of the American northwest. Alpha is characterful with a long linger that is not overbearing.

This beer has won many Gold medals and accolades. That's because everything in this beer is in the right place. Satisfied by one or happy to down a second, this is less of a session beer and more of a slow beer and food companion. Try it with the subtle red meats, like lamb or roast pork. Wisely, bottles are only sold in 4 packs, which suits the sharing consumption of this fine brew. 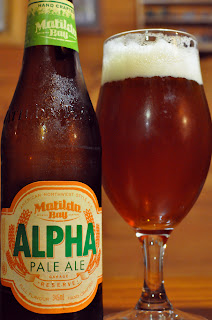 Brewed by Carlton United Brewers (now SABMiller via Fosters), Matilda Bay Alpha Pale Ale was one of the beers to ignite by beer-nerd-ness. When I began my craft beer journey, I often read that Alpha was Australia's best craft beer. It was an elusive ale back in those day. When I was finally able to track it down (no longer a problem), I loved the richness that this beer displayed over the subtle infant Australian craft beers circa 2006-7. 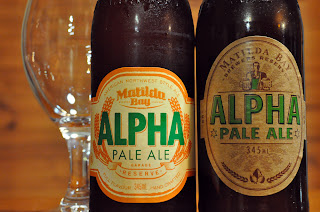 New vs Old...I prefer the old style Alpha label on the right.

These beers are good. As do many pale ales, they suit almost any time or/place because they represent classic beer yet give you character and an experience. They make me smile. 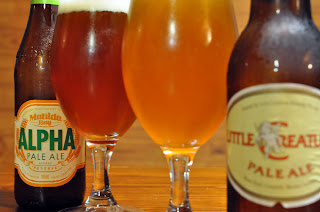