I first met Jayne Lewis when she was the head brewer at Mountain Goat Brewery. Not only was it refreshing to have a female brewer leading the beer production of a local craft brewery, it was also during a time of exciting progress and innovation at Mountain Goat, which helped fuel my own excitement for Australian craft beer. Jayne's fingerprints were evident across the brewery's increasing success, through her command of process and quality control. Most of all, her influence on the barrel aging of beers gave us Oaked Aged Rapunzel...a revelation to my then still young palate.

A year ago Jayne made the bold leap of setting up her own brewing company with her good mate Dani Allen, an exciting development in Aussie beer, which I wrote all about on Australian Brews News.

Last month Jayne and Dani's Two Birds Brewing released their second beer, Sunset Ale. Possibly taking a lead from the uber successful Stone & Wood Pacific Ale, Sunset Ale can not really be defined by a classic beer style. It is an Australian interpretation of a sessionable hop forward red ale with a rewarding character and complexity.

Sunset Ale pours a beautiful copper red with a good sized bright white head. The aroma offers soft Cascade hops, round Cascade hops, full Cascade hops! Yep, lovely tropical fruitness in front of biscuit and toffee. Wonderfully consistent mouthfeel from a light but full body, the taste is vibrant and it is easy drinking. In the mouth the malt is king yet the Citra hop shines through with passionfruit and maybe hints of lime and mango. The specs read as 4.6% abv and 26 IBU.

Thankfully, Two Birds make no secret of the fact that they currently brew their beers under contract at the Southern Bay Brewery in Geelong, "commercially collaborative brewing" as Southern Bay's Head Brewer calls it. I still can not fathom how any company producing a beer can justify the need to lie about where their beer is brewed, as some beer brands have done under the contract brewing scheme. But that's an argument for another day.

Anyway....a little side-tracked there...and here. The one potential drawback of this arrangement is that the Southern Bay bottling process requires all beers they produce to go through pasteurisation (...I think...ok I'm not 100% certain but my current understanding is that it is unavoidable in the Southern Bay bottling process). Pasteurisation is heat treatment of finished beer to reduce any present microbes to a level where the product cannot spoil within its shelf-life. It is standard practice for big commercial breweries that are pumping out mass produced products that reply on consistency (and where liquid hop-extract is used instead of fresh or palletised hops). When it comes to craft brewing, pasteurisation is often a taboo word because it can kill a significant portion of the hop character. I think the Two Birds Golden Ale suffered a little from this process in bottling, because it was much better when it was fresh on draught.

Well, Jayne has definitely done her homework here to deliver a beer that still provides a quality hop character after pasteurisation. Sunset Ale is the most hop distinguishable beer brewed at Southern Bay that I've ever had. (Interestingly, within the same 6 pack we had one bottle that was somewhat different to the rest with a noticeable lacking of the hop character. Not sure how that came to be.)

The winning formula of this new beer is that the biscuity crystal malt sweetness mixed with its tropical fruit hop profile lends to fantastic diversity for time and place drinking. As a match, it will compliment many foods, scenarios and settings. Dinner or lunch, pasta or meat, autumn or spring, footy or party. Maybe, hopefully even a gig beer (...I'm really keen to try that out...as soon as I'm at a live music venue that sells Sunset Ale). It is 6-pack-sessional yet one or two is also plenty enough. 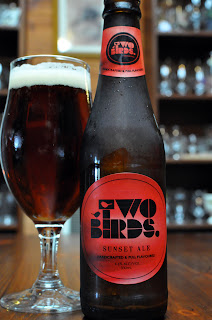 This is exactly the type of accessible beer that I have been hoping to see more of on the local market - flavoursome and sessionable, hops and malt, red. Thank you Two Birds!
at 10:07 PM