During our beer tasting planning for last month's Great Australasian Beer SpecTAPular (GABS), one of our most anticipated beers was the Double Day of the Dead by young New Zealand craft brewery, Garage Project.

Double Day of the Dead's description in the official GABS Tasting Booklet captured our interest at first glance: an 8% Strong Black Lager with chocolate, smoke and chipolte chili.

A Strong Chili Chocolate Black Lager? Hell yes! Good crafty black lagers/schwarzbiers are both underappreciated and few and far between, so we were excited. Add to that Jenn's love of Mexican culture, in particular El Día de los Muertos (Day of the Dead) and sugar skull artwork...on paper this beer had everything we seek in good beer - an interesting beer style with character and concept. 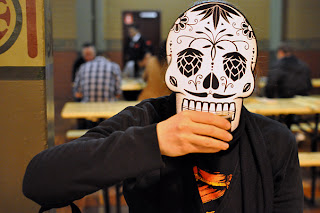 Random Jenn at GABS with Double Day of the Dead mask & taster.

We knew little-to-nothing about Garage Project. Although the social media chatter coming from across the Tasman seemed to always be very positive. Their website filled in the blanks about this band of three...

"Why Garage Project? Garage because it started in a garage, but it's more than that. It’s also about approaching things with a garage mentality. It’s about playing around, making do and thinking outside the box. The surroundings might be basic but this is no barrier to creativity. This is bière de garage – beer from the garage.

And why Project – because it's ongoing, it's a work in progress and we plan to keep it that way. For example, we don’t plan to come out with a fixed portfolio of beers – this is about experimenting, pushing boundaries, blurring the boundaries between styles - seeing what works. We love beer styles, but we want to take them somewhere, to reinterpret, not just reproduce them."

Brewer Pete has worked at large breweries in the UK and even Australia's Malt Shovel (Lion Nathan) brewery. With his brother Ian and their mate Jos, the creative force behind the concept, they home brewed, nano-brewed and contract brewed via Three Boys Brewery in Christchurch. Now they have built their own, very shiny microbrewery in Wellington.

As for their GABS brew - "Day of the Dead, our chilli chocolate black lager, launched on November 1 to coincide with El Día de los Muertos - Mexico’s Day of the Dead. For those who loved Day of the Dead, we've just been down to Three Boys to brew a special, high strength Double Day of the Dead. Most of the beer will be going to Australia for the Great Australian Beer Spectapular (not a typo) to be held in Melbourne in May". 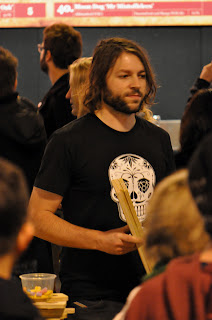 At GABS our excitement proved justified as the beer lived up to our own hype. Chili in beer is always a big risk because it can easily dominate the palate and ruin the drinkability of the beer. Very few commercial examples are good and they tend to end up as a novelty beer. The two best examples of chili beers that we have experienced so far have been big dark ales in the Mikkeller Texas Ranger Chipotle Porter and the Moon Dog Cock-sockin’ Ball-knockin’ Chipotle Stout (a one off brew from Good Beer Week 2011). Hmm...chipotle seems to be a common theme here in chili beers that work. But would it work in a lager?

Yes, oh yes it worked. Double Day of the Dead was one of the few beers that we drank by the glass, twice, at GABS because it was such a highlight. It was a dark lager but it had an excellent, suitable body to support the subtle chili, as well as brilliant depth, complexity and length. The balance was great, with the chocolate, chili and smoke all working in harmony. 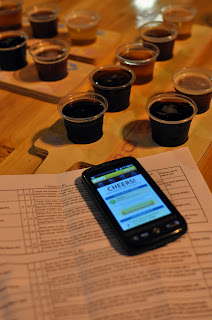 Anyway, I'm rambling and making this post far too long...again. The point of this post was supposed to be that...on leaving GABS I passed Jos who had his arms full with a backpack of beers. I can't exactly recall what was said (because much delicious good beer had been consumed) but I ended up with a bottle of Garage Project beer in my hands after a possibly loose promise to write about it...?

It was a 750ml bottle of Pernicious Weed, number 3 of their 24/24 series (24 news beers in 24 weeks). Other than the subtitle of "whole cone hopped", there is no style or specs printed on the label and I could not locate any official details online.

With an abv around 7.5% and at 98 IBUs (confirmed by the video mentioned below), I dare to label this beer an American Double India Pale Ale.

Pernicious Weed poured a cloudy-to-clean golden-orange with a small but full white head. The deep, hop dominated aroma evokes citrus and tropical fruits, predominately passionfruit, and then some pine which continues into the taste. The bright hop profile reminded me of the new local hop Topaz yet with the distinctive fresh-cut-lawn scent on the edge that I find common from NZ hops and I love muchly. Full and fruity like grapefruit but not too much to take away its beeryness.

Hoppy all through and supported by an appropriate backbone of slight sweetness, it has the right balance and carbonation to make this big hoppy beer easy drinking. It also has a long bitter finish that is not harsh, lingers nicely and is clean enough to send you back for more.

It's the kind of beer you can stand around and think with...or engage in light banter and euphemisms...and maybe have a revelation about how to make everything better. The revelation may not make sense the new morning, but at least this beer will deliver a good time with heartwarming lush lingering...in the mouth.

Oh...and yes, do drink this by the pint...as per this video of Peter & Jos with Pernicious Weed for Clemenger's Wellington in a Pint competition. 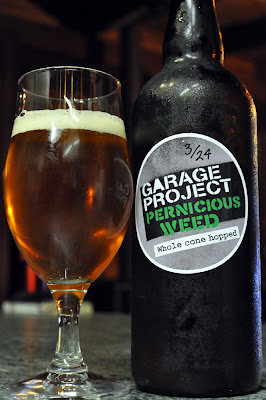 So, that's now two very excellent beer that I have had from Garage Project. I am absolutely looking forward to drinking more...although I may need to travel to New Zealand for that...
at 4:01 PM