Once upon a time there was The Lucksmiths. For more than 15 years they soothed the souls of Melbourne and beyond with characterful soft indie tunes. And then they were gone. But they were not lost.

Some may call it rebirth, others may see a continuation(-minus-Tali). Regardless, today we have Last Leaves...a new Melbourne band featuring ex-Lucksmiths Mark Monnone (bass), Marty Donald (guitar, vocals) and Louis Richter (guitar) with the barista/artist-sometimes-known-as Great Earthquake, Noah Symons (drums).

Yes, Last Leaves look and sound very much like The Lucksmiths...what else would you expect. Nevertheless, in the absence of frontman Tali While, Least Leaves is a very different beautiful beast, bringing back some of the Lucksmith lyrical soul and sound with new musical life.

Unfortunately we discovered The Lucksmiths too late in their existence. During their final year before disbanding we quickly feel in love with the band's lyrics driven, cosy and mellow yet cheery songs. Fortunately, we were able to catch several of their gigs in that time, including the farewell tour shows in both Brisbane and Melbourne. It was a sad passing as we left their final show at The Corner Hotel. When we heard that new music will flow again from Lucksmiths-esque hearts and minds, it was a welcome tune.

One of the first gigs by Last Leaves was held at Earthly Pleasures Cafe in Belgrave earlier this month. By day this historic and heritage listed stone manor is a relaxed cafe serving excellent food for breakfast and lunch. At night on weekends Earthly Pleasures provides a dinner service. On occasional nights it becomes a live music cafe and bar. For me, the best feature of Earthly Pleasures is that they serve good local craft beer. Their bottled beer list includes good brews from Cavalier Brewing, Hix, Holgate Brewhouse, Mornington Peninsula Brewery, Red Hill Brewery and more...perfect accompaniments for the food, surrounds and music. (Oh...and it does also help that Earthly Pleasures is less than one kilometre away from where we now live.)

This gig coincided with our monthly "date night". It was a typical cold evening in the hills but we were soon warmed by the Earthly Pleasures fire-place and the enjoyment of the Mornington Peninsula Brewery Brown Ale, as stalwart acoustic-folk-rocker of the region Charles Baby provided the support set.

Charles is a capable performer and solo voice, but he lacks something of an X Factor to really take him beyond being more than a good support. Charles Baby is a quality artist...just not captivating. Although, he did create a special little moment when his set provided a mash-up of Radiohead and Yazoo. I love such moments from a solo acoustic pub gig. 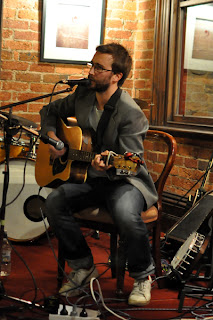 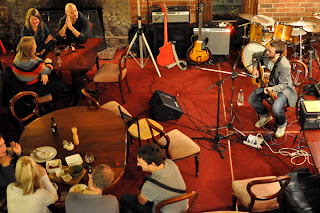 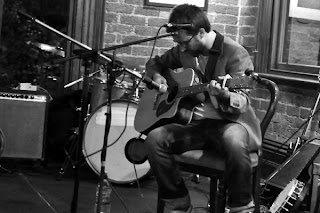 The small crowd swelled to an almost full house as Last Leaves took the "stage" (or designated corner). It was the kind of local crowd were everyone probably knows everyone, except for the couple of newbie locals...maybe.

The start was uptempo full sound by Last Leaves. The musical legacy of The Lucksmiths was clearly apparent, but the Last Leaves sound was making an early statement in the rock direction, as opposed to the often-labelled "twee pop" of their former incarnation. Yep, Last Leaves are a pumped up Lucksmiths...and that is awesome. More importantly, and maybe in contradiction to my words, Last Leaves is a new sound. Their style resumes or simply evolves many of the Lucksmiths quirks in rhythm, pace, breakdowns, vocals and lyrical depth as they regal stories of everyday life around Melbourne...in particular, around the local Dandenong hills. As a whole picture, however, Last Leaves breathes their own unique character and soul. And that is how it should be. A new band with a new life to offer, yet providing a connection to something we all loved before.

One guy in the audience even declared the Last Leaves sound as "fat and sassy", which was welcomed with laughter by many. Drums provide the obviously new dynamic to the still-very-Lucksmiths guitar and bass sound, alongside the expanded squeals and little airy "U2" moments from Louis Richter's electric guitar.

There was a moment of bliss behind the realisation that we were enjoying slow beer, drinking the brilliant Holgate Hopinator, at a gig close to home, which featured 3/4 of The Lucksmiths. Good times of years past had joined us at our new home in the hills...with the added bonus of fine craft beer. 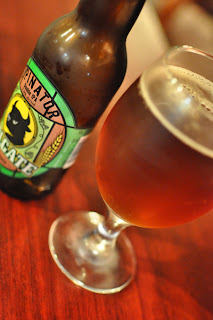 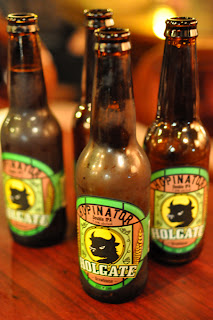 Hell, after a couple of Hopinators I had written in my notebook: "The Lucksmiths vs The Drones kinda equals Last Leaves!". Sounds like my type of paradise.

With the songs too new to know, I can only recall that the set included "The nights you drove me home" and "Where I lived and what I live for". Marty Donald has been quoted as saying "It's early days, of course, and things are still taking shape, but already the new-found sense of space in the songs' narratives is reflected in their more expansive and dynamic sound"...and that sums it up nicely. It was a great gig, in a venue that was a superb fit for the music.

(Hint for gigs at Earthly Pleasures: for the best sound, head up the balcony!) 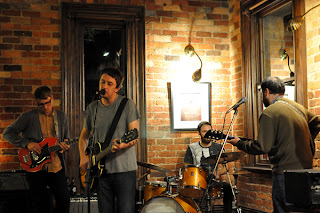 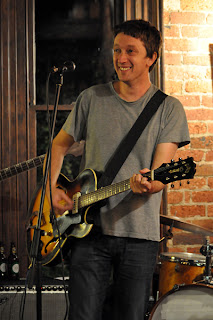 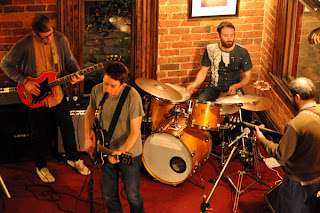 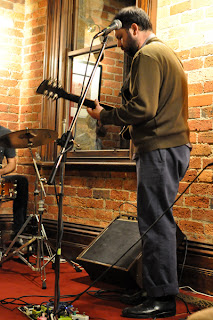 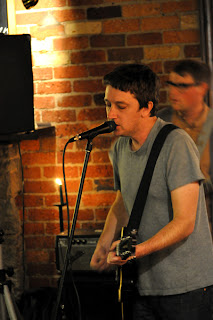 If you liked The Lucksmiths, you will love Last Leaves. If you are looking for something new on the local indie rock front...check out Last Leaves!
at 9:27 PM