After a five day weekend over Easter, it is a rather sad experience to return to the standard two day weekend. Therefore, I planned to make the most of my May Day Sunday.

First I had to complete my healthy-life obligation of a 10km run (...in preparation for next Sunday's Mothers Day Classic 8km run) followed by domestic duties of ironing, cleaning, lunch & dishes. Yes...hardly blog worthy, but such is my life. 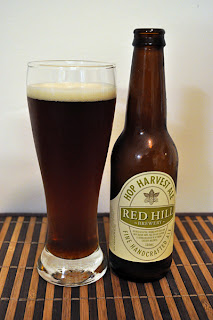 May Day...celebration of the Harvest with a Red Hill Hop Harvest Ale!
Over lunch, complimented by the brilliant autumnal Red Hill Brewery Hop Harvest Ale, I followed online the AFL team I barrack for - Essendon Bombers - as they kicked the HELL out of newcomers, the Gold Coast Suns. Ok, no mean feat here. In only their sixth game ever The Suns do not have the build or experience to provide quality competition yet (unless they are playing the worst team in the 2011 AFL competition - Port Adelaide Power). So I should not be overly excited...but a decade suffering Essendon supporter will take anything they can get right now!

I watched the online scorecard tick over and over, goal after goal after goal, as my Bombers finished the 1st Quarter with 15 goals and 4 behinds (94 points!!) to 1 behind (1 point!). Unheard of in AFL history!

So, with this Aussie Rules footy slaughter providing a rare high for my team, I fast-tracked my plan to watch the 2nd Half telecast and quickly headed down to my local - The Skinny Dog Hotel - to watch the rest of the game live via the Pay TV feed (I don't have Foxtel at home...it's an expense that I can not reasonably justify).

FAIL #1 - Arriving at The 'Flog (The Skinny Dog), I found a bunch of fit 20something Corona drinking guys & gals crowded around the plasmas watching silly UFC. I'm sorry...but UFC is baseless and entertainmentless for me. To see all 7 TVs in the pub tuned into the UFC was...disappointing.

I quickly left that scene and jumped down to Local Option Number 2 - The Hotel Kew. Thankfully, Hotel Kew (a Sports betting pub...very much not my scene) was showing the footy (with audio!) and it was relatively quiet and free of knobs that are commonly attracted to such a pub. Unfortunately, the ONLY beer available in this pub that is not a macro adjunct lager was James Squire Golden Ale. It was enough to suffice for a quarter...but I wanted to enjoy this fun footy watching experience with good beer...craft beer! The Hotel Kew is a good beer wasteland.

At half time I jumped on a tram and headed down to Richmond, making tracks for my favourite Melbourne pub of all...The Royston Hotel.

FAIL #2 - Unfortunately, when I arrived at The Royston I discovered that the pub does not open until 3pm on a Sunday. Boo!

So, I jogged back to Bridge Road, home of many pubs. After quickly noting that The Bridge Hotel was also closed, very closed, I trammed up another two stops and headed into The Spread Eagle...as classic pub with a big central rectangle bar, which needs better beers on tap. Thankfully, they at least have Little Creatures Pale Ale on tap...HOWEVER...it was Sunday afternoon trivia. So, whilst the footy way playing on 2 big screen TVs, there was no audio...replaced by the Trivia host's voice... FAIL #3. I do like the Spread Eagle...but I was saddened even further when I heard that one of the trivia teams was named "The Cider Men". Ug...boys...drink good craft beer! It will impress you like no cider can!

At 3pm I made my way back to The Royston...only to discover that my favourite pub does not have Foxtel and therefore were unable to show the footy. FAIL #4

This failure was made up for by a pint of draught Bridge Road Brewers The Harvest Ale (2011 release). A beautiful beer, easy drinking with a long lingering taste that is hoppy fresh and balanced with excellence. This is the type of beer I hope will one day be regularly be on tap at the majority of Australian pubs. One day...! 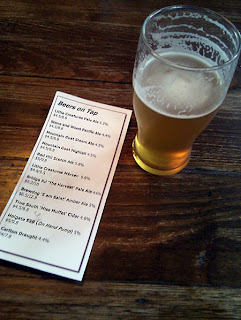 (A full blog post of three Australian hop harvest ales in pending...so I will go into the full tasting notes then.)

My beloved Bombers were picking up the pace again in the 3rd Quarter of the game...and I was still keen to witness the live vision. Hence, I ditched my esteemed Royston and slow trammed back to...*sigh*...Hotel Kew to catch the final minutes of the game. Over another pot of James Squire Golden Ale, a fair but uninspiringly thick English Pale/Golden Ale, I celebrated a massive win by the lowly Bombers over the uber lowly Suns...which I mostly missed, because I do not have a subscription to Foxtel.

To complete the symmetry of my day's fail pub crawl, I went back to the start...returning to the Skinny Dog Hotel. I would have been happy to spend my Sunday afternoon at the Skinny Dog watching the footy, which I have done many times in the past, thanks to the supply of Colonial and Little Creatures beers. However, UFC cancelled that option for me...and through my failed hunt for beer and footy, I discovered how little good beer and/or craft beer mixes with sport in my local area. Despite living so close to Melbourne city...the craft beer capital of Australia...we are still a long way from penetrating the mainstream beer market.

Anyway...with the pub now relatively empty, I watched the post game wrap-up over a pot of White Rabbit Dark Ale, a welcome tasty relief in Melbourne pub-land. (side note: on Friday night I went through the "in-house" crafty Colonial beers on tap at The Skinny Dog - Kolsch, Witbier, Pale Ale and Porter - and enjoyed their balance...but more on that to come...) 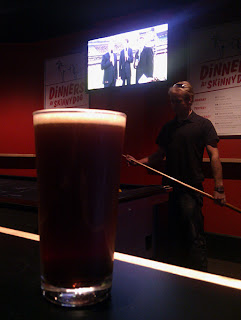 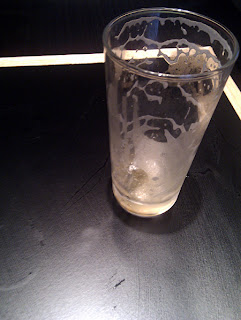 Excellent lacing.
In the current local landscape of craft beer, the White Rabbit Dark is definitely a quality beer (as shown by its #7 ranking in the recent book - The Critic's Choice: Australia's Best Beers). However, on this occasion it did not satisfy me. FAIL #4.3 (yeah...not really a full fail...just a third...). I was in need of something with a fuller body and fruitier flavour.

Therefore, to end this fail day with some extra win...I enjoyed a dessert of the Trappistes Rochefort 8. Recently, I've had a craving for something full-bodied, dark and fruity...so I picked up this popular Belgian at Slowbeer. In the past I have muchly enjoyed the highly regarded Trappistes Rochefort 10 but had yet to taste the 8 on my beer journal. Now I have...and it is good...damn good... 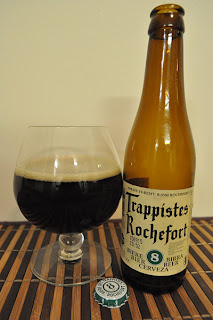 Essentially a lower gravity and ABV version of the Trappistes Rochefort 10 (which is still my favourite from the Rochefort range), Trappistes Rochefort 8 provides a wonderfully deep and fruity aroma that is a pleasure to just sit and inhale. In the mouth I tasted plenty of dark cherry, chocolate, yeast and something a little nutty. With a warming finish from the 9.2% ABV, it is suprisingly easy to drink and hence did not last long between the wife and I as we ended our Sunday.