Well this is a surprise! I knew the next batch of Mountain Goat's Surefoot Stout had been brewed and was heading for Rare Breed bottles, as well as the usual Mountain Goat taps, but I thought it was at least another three weeks away from release. This is primarily because Mountain Goat co-founder Dave Bonighton told me so last month. Dave noted that the next new beer to be released from the Mountain Goat tanks would be the Mountain Goat/Moon Dog/Matilda Bay collaboration beer (a Belgian Dubbel, codename "Abbotsford Brew"), with kegs delivered to good beer bars during Good Beer Week. Surefoot Stout would follow that at the end of May.

Fast-forward to tonight, the wife and I made an evening dash down to our local shops for some groceries. I also used the opportunity as a beer run. (We have cheekily extended the Good Beer Week concept to Good Beer Month, as we aim to drink at least one craft beer every day during May.) The chill that has recently settled in to Melbourne's air had installed in me a craving for something dark...a stout.

Our dark beer shopping options are limited at this particular group of local stops. Therefore, my mind had settled on sufficing with Cooper's Best Extra Stout (#12 in the Critic's Choice book). Surprisingly, there was none available in the big chain supermarket, Woolworths. As a backup, I wandered over to my local Vintage Cellars (wine outlet of the big chain supermarket, Coles) and was delighted to find in the beer fridges...a fresh batch of Mountain Goat Rare Breed Surefoot Stout  (a terrible omission from the Critic's Choice Top #100 Australian Beers)!

So I purchased three bottles...and now I have Surefoot Stout circa Autumn 2011! Hooray! 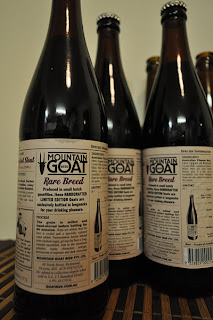 Curious, I asked Dave Bonighton via twitter if this was possibly old stock from last year (which wouldn't be out of the question, knowing the turnover rate of craft beers at this Vintage Cellars...where they are still selling Stone & Wood Draught Ale). According to Dave, this batch of Surefoot Stout was a special small batch brewed specifically for Vintage Cellars. Maybe this means VC are "testing the waters" with the retail of Mountain Goat Rare Breed releases. So hopefully I am helping the cause by buying up a batch...because I would love to see Rare Breeds stocked at ANY shop within 300 meters of my home. (hehe)...greedy me. 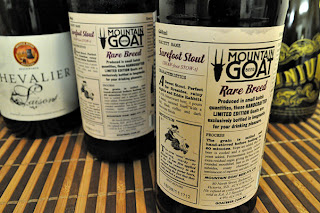 Mountain Goat's move to produce regular Rare Breed releases throughout the year was one of the best developments of 2010 in the Australian craft beer scene. Formally a regular seasonal produced in 330ml bottles, the Surefoot was dropped from the main Mountain Goat line up when the focus turned to the supply of Hightail and Steam Ale. However, when space was created at the Mountain Goat brewery to allow more experimentation and small batch releases, the Surefoot Stout was given the royal Rare Breed treatment. As a 4.9% alc/vol craft stout, it provides a welcome difference in a market sector that is saturated by Imperial or flavoured stouts. 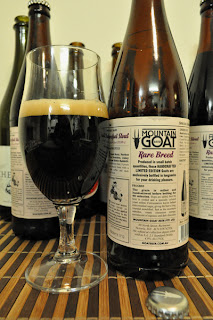 The Surefoot Stout appearance is wonderful. Black without being too thick, it pours with a decent tan head. The aroma is of sweet malt, milk chocolate, some yeasty esters and that Mountain Goat signature blend that I love so much.

This year's Surefoot is extra beautifully smooth. This is because Mountain Goat have filtered it for the first time. However, it was good to hear from Head Goat Brewer, Jayne Lewis, that this batch was brewed using the same old tried and true Surefoot recipe.

Maybe this batch is just extra fresh, but I think the beer's body has been beefed up and a richer chocolate taste is shining through, alongside plenty of roasted malt and some liquorice notes. Yum. 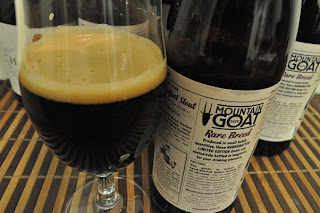