Federation Square's Beer Deluxe truly is...deluxe! No false advertising here! It's just a shame that this bar is such an expensive place to drink (...but that is mostly understandable, I think).

The jewel and purpose of Beer Deluxe is clearly their extensive tap beer selection. With about 15 regularly rotated beer taps, pouring only craft and boutique beers, you are pretty much guarantied to find here not only the best in local craft beers, but also a new beer to try.

As is fairly common practice in specialist beer bars, the Beer Deluxe "beer bible" menu not only provides a full list of their available beers, categorised by beer-style and with brief tasting notes for each, but also provides a Glossary of beer terms and other beer facts. Plenty of thought has gone into the tasting notes, providing quite a sexy read for beer lovers!

Also a requirement for such a bar, the beers are all matched to the specific beer glassware appropriate for pouring and drinking the particular beer style, ehancing flavour and drinkability.

Catering for all, there is also a fair selection of spirits and wine...for those who dare to visit Beer Deluxe for something other than beer.

I love that Beer Deluxe is shiny and has an inner-city classiness, yet very relaxed and welcoming. The plentiful wooden seats and tables over the split-level space provides a cosy interior. Outside there are large long benches and tables providing a pseudo-beer-garden, as well as more couches and sitting space down the side in Fed Square's The Atrium (which also supports a secondary bar and cafe).

Indoors the space is well lit, with soft music playing, allowing for easy conversation. This is a place to enjoy and discuss beer. Therefore, the respectful music level helps encourage that. However, their kitchen can get fairly noisy from time to time. The indoor room temperature is also just right, exemplified by the sweet cool relief I experienced walking into Beer Deluxe on a very warm and humid March afternoon (...or was that just the refreshing Stone & Wood Draught Ale?).

The Beer Deluxe atmosphere is certainly enjoyable. I really like the open design and space layout. Although, I've never been in Beer Deluxe when it has been crowded.

The bar staff at Beer Deluxe can be a little hit and miss. Sometimes you will be served by a true beer expert, who is a fountain of knowledge and skill, and will really open up your beer drinking experience. Other times, you may suffer the lacking of lesser staff (possibly new/casual staff...?) that may take too much time finding an answer to your simple question (like, "how much is this tap beer?") or just trying to cleanly pour your beer, but that's employment for you...I guess!

The part the hurts me the most about Beer Deluxe is unfortunately their high prices. For many this may not be an issue. For those like me wanting to enjoy true quality but are living on a tight budget to get by, it's a little disheartening. I think that I mostly understand why such a bar charges so much for their product - because they must pay a serious premium for being situated in such an excellent location, very close to the heart of Melbourne city, in addition to being within the Federation Square complex. Further, the bar is often pouring beers from local craft brewers that you are unlikely to find on tap anywhere else.

For example, during my March visit I had the super flavoursome and deliciously hoppy Murray’s Shawn’s Fault (India Dark Ale) from Murray's Brewing.

When you can afford it, it's a joy to consider which beer you will drink next at Beer Deluxe. And I'm sure there’s probably more to the story…however, when it costs $12 for 385ml of a very local small-batch but readily available craft beer (in this case, Mountain Goat's Rapunzel), this is a tiny bit beyond me.

Finally, Beer Deluxe also has a generous online presence, with their website, a Facebook page and you can follow them on Twitter. Hence, it is easy to "prepare" for a visit to Beer Deluxe, as well as keeping up-to-date with what's on offer over their bar. I am thankful to any business that puts time and effort into keeping their internet content active and current. I am always more inclined to use a business when they are communicating regularly with the world. 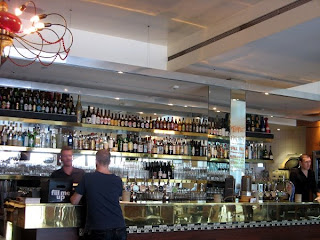 Where to start? A joyful choice at the Beer Deluxe bar. 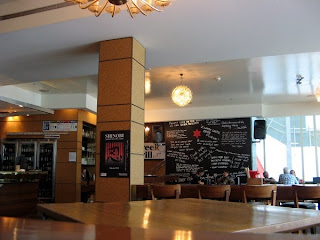 Classy but cosy inside. 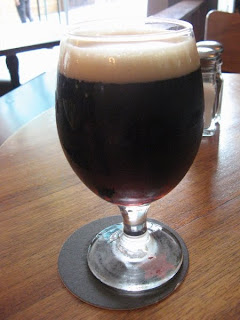 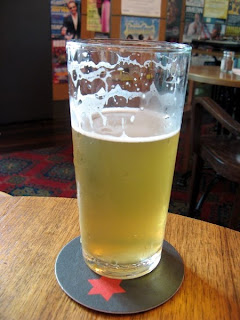 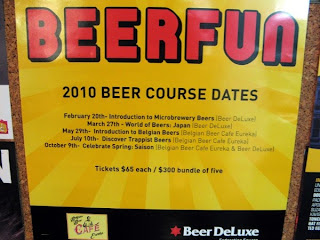 Here's some dates and events for local beer loves to mark in their diaries!
I am definitely excited to be returning to Beer Deluxe this weekend...potentially a number of times throughout the weekend because they are currently pouring the Temple Bier de Miel and Moo Brew Imperial Stout...but primarily for the previously mentioned Hair Of The Dog Breakfast on Saturday morning, courtesy of BeermenTV.