Beers - Beery Cheesemas to All (Christmas 2011)

Christmas is a time commonly used to indulge in the delicious, sweet excesses of food and drink...and it's no different at the Beer Bar Band home.

Last year we had fun with A Very Beery Christmas, in which each food element of our Christmas lunch was made with beer, around the centre-piece of a barbecue beer-can chicken. This year we indulged our new found love for fine cheese matched with excellent beer.

We gathered 12 awesome craft beers (12 beers of Christmas style) as well as 6 fine cheese from around Melbourne.

Celebrating our first Christmas in our first home, which we bought a few months back, the wife and I had a quiet little fun day with just the two of us. We made the most of our spacious deck with views across the green canopy of the Dandenong hills. It was a warm and sunny morning, then the afternoon turned into a stormy affair. Heavy rain, thunder and lightning flooded and damaged parts of Melbourne, but from our vantage point it simply resulted in a pleasant light and sound show.

During the calm before the storm, we set up a big Christmas lunch spread centred around the beers and cheeses. 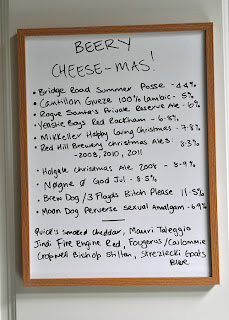 The Christmas menu on our kitchen pantry door. 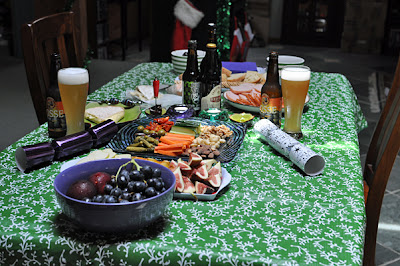 Merely part 1 of our Christmas table spread.
With the beers naturally ordered from light-to-dark-to-heavy, we tried countless combinations of beer plus cheese plus various morsels of delicacy.

The wonderful cheeses were: 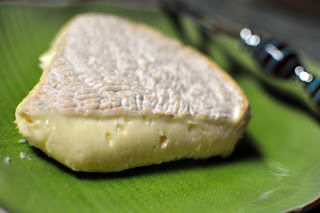 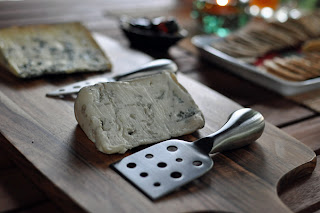 Our midday palates were first wet with the 2011 Posse Summer Ale for members of the Bridge Road Brewers Posse club. It has been an excellent beer for this mild summer and it's a fine starter for any beery session. An easy drinking, nicely spiced and well balanced witbier that matched very well with the soft cheeses.

Then we went sour and popped the cork on a benchmark lambic that is guaranteed to find favour with many forms of good cheese - the Guezue 100% Lambic Bio from Cantillon. This sessionable wild ale has just the right amout of sour tartness following the big aroma of a classic lambic. 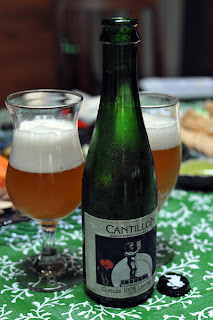 Next we poured two red ales...always appropriate on any Christmas Day. First we had the Rogue Ales Santa's Private Reserve, a big malty American Amber Ale with a solid bitter hop hit. This beer had been sitting in my not-quite-a-cellar beer cellar for a year following a trip home from Queensland...so it may have suffered from a lack of freshness. Thankfully, it still stood up and worked well on a stormy yet warm Australian Christmas day. 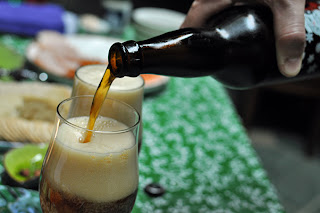 Pouring the Rogue Santa's Private Reserve.
The second red ale was one of my top 3 beer highlights from this Christmas feast...the new Red Rackham by the adventurous Yeastie Boys. This accidental beer started out as a batch of the Yeastie's Hud-a-wa' Strong but they pitched the wrong yeast, a Belgian ale one. The result is a very tasty Belgian Red Ale with a full mouthfeel and excellent balance between malt, spice and bitterness. This complex brew ultimately tastes like a silky red ale, but has much more going on in it. Beautiful beer. 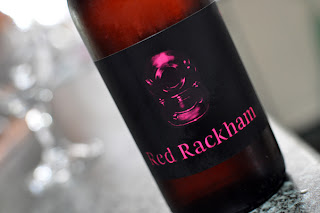 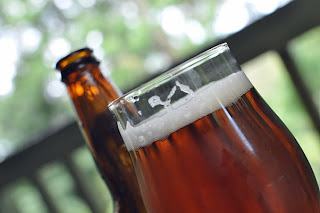 The hops came out in full force with the very Mikkeller in taste, Mikkeller Happy Lovin' Christmas Double IPA. Another quality and very easy drinking big beer from Mikkeller. 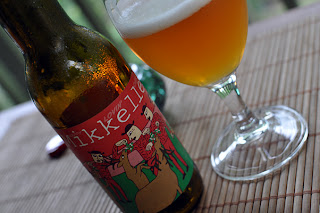 And then an extra special moment of Christmas Ale drinking was lined up next.

We had three vintages of the Red Hill Brewery Christmas Ale for a vertical tasting, plus a 3 year old Holgate Brewhouse Christmas Ale (which is sadly no longer brewed by Holgate).

I love this Australian intrepretation of a Belgian Christmas ale. The current release was especially good when we drank it fresh at the Red Hill brewery on the first weekend of December. In this vertical, the 2008 vintage was by far the stand-out. The carbonation was still excellent and the rich, deep fruity flavour surrounded by spices had developed beautifully into a well-rounded semi-dark Belgian.

The vertical tasting definitely showcased the way this beer develops with age. The same beer was really quite different across the three vintages. My recommendation: sit on this beer for 3 years for maximum effect! 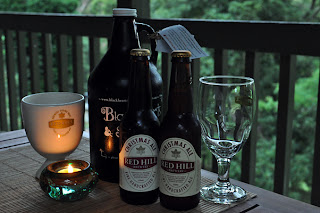 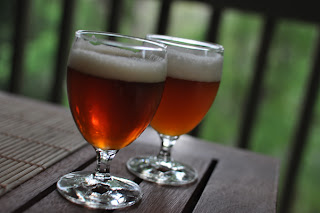 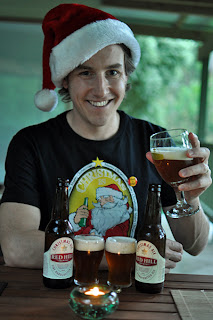 The three Red Hill Christmas Ales were enjoyed slowly with blue cheese and a game of Trivial Pursuit. 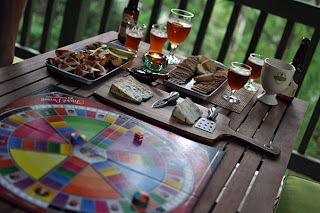 As the storms rolled over the hills past us, we lazed on our deck, watching the rain and lightning. We excitedly cracked the bottle of Holgate Christmas Ale, it was the most anticipated beer of the day. It had been gifted to us by the Holgate brewery crew when we stayed at their Keatings Hotel for our first wedding anniversary back in August.

In contrast to the 2008 Red Hill Christmas Ale, the carbonation was very minimal in the Holgate Christmas Ale but that did not detract from the spectacular flavour of a dark fruity Christmas cake. One could quite easily mistake it for a fortified wine! The warming alcohol was fairly evident, making it an excellent sipper, enjoyed with more blue cheese and dark chocolate, plus splashes of storm. Brilliant. I didn't want to finish it because it was so good...and then it would be completely all gone, with no return. 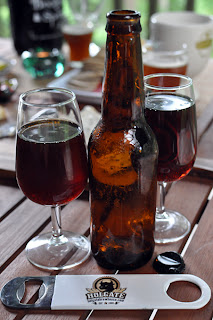 My #1 beer of Christmas 2011...the 2008 Holgate Brewhouse Christmas Ale!
Whilst this beer has been replaced in the Holgate brewing schedule by my favourite Holgate beer, Beelzebub's Jewels (Paul Holgate has noted that their Christmas Ale was essentially a trial brew as they worked up to producing this barrel aged belgian quadrupel), I truly wish this Christmas Ale was still around every December because it is a damn fine beer to follow Christmas dessert.

Later in the day, when we somehow found some space in our super full stomachs for "dinner", we brought out the Quickes Smoked Cheddar, some smoked almonds, smoked turkey and opened the God Jul from Nøgne Ø. The uber smokey God Jul islay edition is one of my all-time favourite beers and until recently I had never tried this regular God Jul. That changed two weeks back when Josie Bones tweeted that they had the beer on tap (I have never come across this beer in draught form in Australia before!). By some awesome freak chance the wife and I were planning on being in the area that night for dinner, so we first stopped into Josie Bones for a glass each of the divine God Jul in draught form. The regular version of this strong dark Winter ale still displays a hint of the peaty smoke and provided a great start to our late light dinner on Christmas Day.

I love barely wines and I love smokey beers, so a barrel aged barely wine brewed with Islay peated malts was always going to be a winner in my mouth. It came in the form of the 11.5% BrewDog Three Floyds collaboration brew Bitch Please... 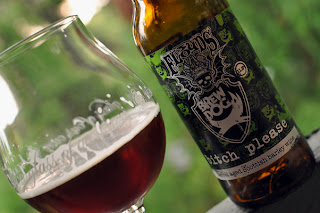 And yes, I enjoyed this beer immensely (...some things were a little hazy by this time of the day though). A very well crafted smokey barely wine with the right level of carbonation and mouthfeel that I expect from such a beer. I do indeed recall that it was a perfect match for the smoked cheddar 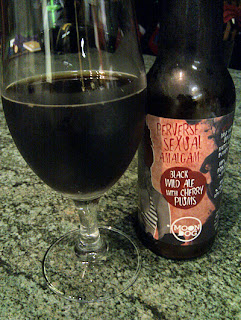 And so ends another excellent Christmas of beer (plus cheese!).

Every beer we drank across Christmas was simply excellent. The stand-outs for me, those WOW beers, were the Yeastie Boys Red Rackham, the 2008 Holgate Christmas Ale and the 2008 Red Hill Christmas Ale. How special...since 2008 was when I effectively started this craft beer journey of mine!

Maybe if I was a little sober to properly recall the 11th beer of the day, I'd probably be trying to find a way to make 3 out of 4 to include the BrewDog Three Floyds Bitch Please.

Nevertheless, each beer worked well in their own way, including as a Christmas brew and an accompaniment to fine cheese, smoked (cold) meats and various nibbles. All the beers offered a unique experience of craft beer and I am keen to drink more of them all again whenever I can.

We now excitedly look towards the new year as this journey continues through the incredible science and art of taste and texture...

LOOK OUT mass-produced bland lagers...the people-driven train of good beer at the dining table and in our hands gathering steam and powering towards you to take beer drinkers in a new direction in 2012! 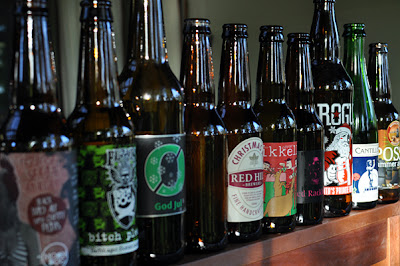 Find these. Drink them. Experience them. Cheers!
Wishing a merry Christmas and a safe, happy, deliciously experiential New Year to all!  CHEERS!
at 2:45 PM