Tucked away in the suburb of Thebarton, a short & free tram ride from Adelaide's city centre, is The Wheatsheaf Hotel. Affectionately know as "The Wheaty", it is one of the best pubs in Australia...in my book!

During a short visit to Adelaide back in June, Jenn & I spent one long (but far too short) Monday evening at The Wheaty and it was instant love. We wanted to pack the place up and take it back with us to Melbourne in our carry-on luggage! Great beer, awesome people, excellent vibes...this pub has it all.

Melbourne may be the bubbling craft-beer-culture capital of Oz by shear weight of beery venues, events and retail outlets, but this city has nothing like the The Wheaty. The much smaller Royston Hotel in Richmond could come close but is missing the live music, engaging staff and bohemian diversity fully embraced by The Wheatsheaf Hotel.

The Wheaty flies to the top of my favourite pub list for excelling in pretty much all the criteria on which I rate such a venue...

Firstly, the building is a classic Australian two-story pubic-house hotel structure that dates back to something like the 1860s. The current facade has clearly been around for decades, seemingly relatively untouched, and it gushes character. I love a pub that looks like a pub yet clearly has personality and isn't covered in macro beer advertising. 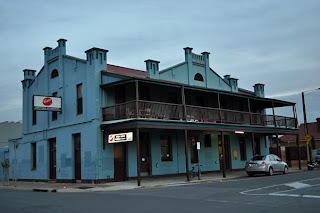 Secondly, the irreverent respect for good beer at The Wheaty warms my soul. The owners may be serious hop heads, but they are adventurous and open to all beer palates. It's true the The Wheaty is a recognised craft beer destination in a city that is still predominately void of beer choice other than mass produced products. Fortunately, the locals seem to be well on-board with The Wheaty's good beer offerings.

Their taps are dedicated to flavoursome South Australian and wider Australian craft beers, alongside highly regarded international brews, including a special place for anything from the Oregon based Rogue Ales. Their irreverence shines through with their use of a beer engine handpump. English real ale purists may be appalled with the types of beers they pour through this tap (like huge Imperial IPAs and Russian Imperial Stouts) but The Wheaty staff have also worked with Aussie microbreweries such as Moo Brew and Lobethal Bierhaus to provide cask conditioned ales specific for the handpump. Beside it sits the Glasshopper, a Randall Handle hop infuser that gets packed with anything the bar staff want to through at it, regardless of the type of beer.

During their "Font of Darkness Festival" in August they poured Moo Brew's Stout through The Glasshopper filled with Indonesian Kopi Luwak Weasel Coffee and called it "Poo Moo". winning!

On the night we were there, our drinks included:

Too often I see the Wheaty's twitter updates of their current tap line-ups and start looking online for cheap flights to Adelaide as they jealousy rises. They are they only venue in Australia to have tapped a keg of Mikkeller's Beer Geek Brunch...and I wasn't there! Sad, but massive respective to The Wheaty for tapping the beers they do. 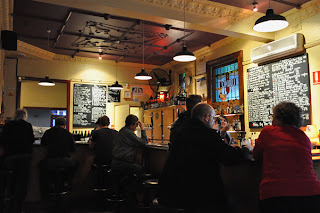 Thirdly, the various rooms/spaces throughout The Wheaty allow for, even encourage, a plethora of social abandon. Whether you just want to sit at the bar and drink beer; laze on a couch and read a book; play a few rounds of pool with mates or strangers; hold a meeting; form a club; get animated with colleagues; shoot the breeze in the beer garden; hold and event; play a gig or just stand and stare at the ceiling...The Wheaty has the space for all of it with uncluttered and characterful rooms.

The semi-covered rear courtyard provides a versatile bandroom, allowing live music and performances of all genres. Everyone in the courtyard can have an excellent view of the small corner stage from any position and the sound fills the space wonderfully. The atmosphere of the bandroom is cultured and relaxed with a splash of industrial...and seems just right for a party. 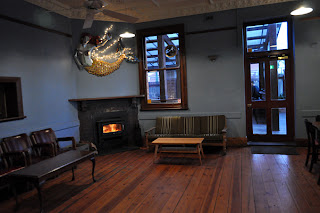 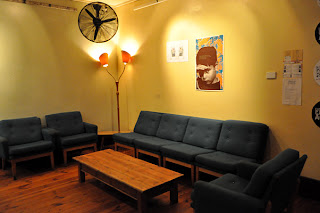 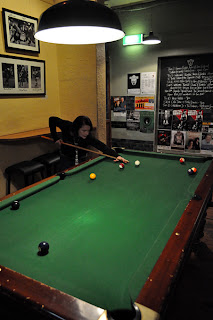 A wide range of groups and organisations gather at The Wheaty. Community and arts groups, knitting clubs, sporting groups including Roller Derby teams, beer-focus gatherings. The Wheaty is a truly welcoming pub.

Naturally, the owners and staff don't tolerate dickheads, but I suspect there are few occasions when dickheads dare to be a dickhead in The Wheaty.

The owners - Jade, Emily and Liz - are passionate publicans. On that Monday night back in June we spent a couple of hours chatting to the wonderfully upfront and accessible Jade Flavell about running The Wheaty. It was clear that the owners have found their true calling and made it happen.

Jade told us all about their history of taking over the pub, crafting it to their liking and the barriers and battles of making a great pub even better. It was sad but familiar to hear that at times they also battle the universal confusion of obtuse local and State laws, similar to the stories of friendly publicans from Melbourne. 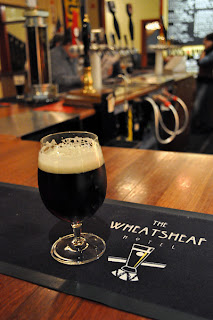 There is no food at The Wheaty, other than delicious cheeses that are perfect for matching with the beers available. There is the intention to one day build a kitchen and serve some food. The planned kitchen is an eternal work-in-progress but will "definitely happen", according to Jade back in June. For now it's BYOFood, the staff are more than happy for you to order in. A pile of local take-out menus sit at the bar and those businesses are happy to and familiar with delivering to The Wheaty. We ordered pizza's, asked for delivery to "The Wheaty in the Blue room" and it was efficiently delivered to our hands 40mins later.

The Wheatshef Hotel's bar will satisfy any beer lover, yet what is more rewarding is that The Wheaty is a diverse venue that is far from just another craft beer bar...

...it is a great pub that also has awesome beer!

To read more love for The Wheaty, check out the following online articles: