My wife has a couple of "music husbands" and Josh Pyke is one. When I first met her in 2006 she had recently discovered Pyke's music through a late night showing of his "Middle of the Hill" video clip on Rage and then had caught this unknown artist at a couple of tiny gigs at Brisbane's The Troubadour (RIP).

I was deep into the pub rock scene at the time, but also looking to rediscover some quality local acoustic-alternative music. It was a desire to reconnect with the style that originally ignited my love for the unplugged guitar. Soon after we connected I had purchased Pyke's "Feeding the Wolves" EP and experienced his live talent as a support for Eskimo Joe at The Forum. The dark literary lyrics and drop-D tones of Josh Pyke's music has kept us on board his melodical journey from obscurity to popularity.

Come last month, the wife was all over the announcement that Pyke would launch his new single, "No One Wants A Lover" with a special mini-tour consisting of intimate gigs for the fans. Josh would return to his solo roots roots playing small rooms with just his guitar and voice.

The sold-out Melbourne gig was held in the upstairs bandroom of The Grace Darling Hotel. Located along Smith St in Collingwood, a strip of emerging trendiness, the Grace Darling is a modern bar with character from the old pub building. It also has an (unfortunate...ha!) historic connection to the formation of the Collingwood Football Club. (why would I ever mention that?!? my team my be doing ok at the moment...or something...) The bandroom covers the upstairs section of the building, which provides three spacious rooms with one including a bar and corner stage to fit a cosy 3-piece or squishy 4-piece band.

This particular "Fans First" show was an intimate gig in an intimate space with an intimate audience all there for intimate songs. Thankfully though, there was plenty of room to move, as the crowd spread out through the various upstairs rooms throughout the night when the stage was empty.

Jackon McLaren opened the gig with a short and sweet set, focusing on his current EP, Mirrors and Strings. We have seen Jackson several times before, as supports to Howie Day as well as Josh Pyke who produced his self-titled EP in 2009. Each time McLaren has displayed an improved maturity and competency with his familiar-feeling songs.

Jackson plays simple songs on a well-worn left-handed guitar, with a mostly alt-country or folk rock vibe to the tunes. His chord driven music invokes a mix of Bob Dylan, Paul Kelly and Colin Hay.

Between songs Jackson sipped on a Bowmore Islay Single Malt Scotch Whisky and declared his love for the spirit. Post gig the wife told him to find and drink Yeastie Boys Rex Attitude!(Go Jenn!) He seemed interested, so I hope he does! We bought his EP for $10 and caught him play again two weeks later, as he supported Busby Marou at Northcote Social Club. 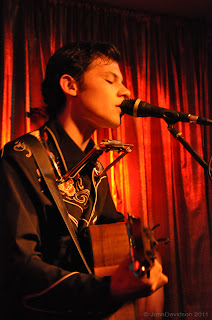 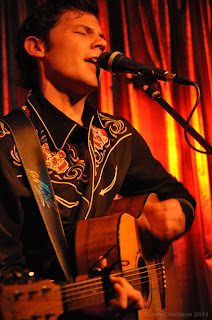 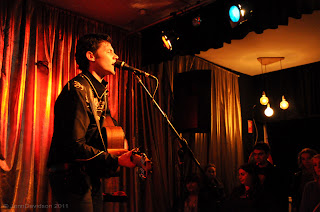 Between sets I ducked downstairs to the main bar and stocked up on bottles of Mountain Goat Hightail and Murray's Craft Brewing Co Whale Ale for the next set. After ribbing the upstairs bar tender for the sadly poor selection of beers, I had learned that it was fine to purchase any beer from downstairs and bring it back up into the bandroom. Coopers Pale Ale was the best draught option from the limited bandroom taps, where the bottle selection is just...big bland macro-commercial. I would much rather enjoy such a gig with a fine Aussie craft brew if it's available in the same building! Probably one of my least favourite beers from the always excellent Murray's, Whale Ale scores a tick as a good gig beer. Flavoursome and sessionable, it suits live music in a pub setting well.

Josh Pyke hit the stage and launched into the familiar tunes of "Forever Song", "Candle in the Window" and "Memories & Dust". After a couple of years of playing to large crowds around Australia, with full backing bands, some stage production and a stint with a super-group project, it was great to see Pyke recapturing his solo roots, right down to the use of his footstomp pedal. This gig was the old-school Pyke that had made us fans.

Pyke's first new song of the night provided a new element to his performances - the use of loops to set up beats, percussion and additional vocals, all using only his single guitar and voice...plus a double microphone. It's a trick that we had seen before from other solo artists and it worked well for Pyke, who was quite proficient with the looping setups. "I've been practicing heaps", Josh told us after the show, noting how difficult it actually is to get right.

More new songs followed. I didn't catch the title, but the song with the line "whose side are you on?" displayed further efficient and effective loop beats. Josh also used this new effects play-thing for a revised intro to "Make You Happy", which was initially punched in too fast causing Pyke to stop the song and say "ahhh...that was a test of the new song, Make You Really Happy". It would be his only obvious mistake with the effects and provided a quality moment of light relief. "Boys with their toys!", Pyke quipped.

The crowd showed their fandom with cries for "Doldrums" and "Silver". Josh responded firmly yet playfully with "I'm not a fucking jukebox!". That was followed by an incident with an audience member who loudly asked some fellow crowd members to "shut up!", which Josh would later recall to be hilarious...once he discovered that it came from fellow artist and mate, Lior.

Josh kept the gig rolling with "The Summer" and then his new single, the first from the new album, "No One Wants A Lover". Like Jackon McLaren's "A Whole Day Nearer", this song is currently being flogged on TripleJ, so the crowd readily joined in.

The alternation between old and new songs continued with "Lines on Palms", new song "Factory Fires", then "Our House Breathing" and "Sew My Name". The set was wound up with lively hits "You Don't Scare Me" and "Middle of the Hill", both of which offered new variations with the loop and microphone effects.

The night ended with Josh's favourite song from the new album, "Love Lies", which had a feeling of The Shins to it.

I found it a little unusual that for a gig aimed at the hardcore fans it did not include any of his pre Memories & Dust songs (other than the forever present "Middle Of The Hill"). However, this is probably just the case of Josh having a head full of new and recent songs that he needs to refine for upcoming tours. Ultimately, the audience seemed satisfied by the set. The night achieved its purpose...providing a speical intimate gig for those who really wanted it.

Speaking to Josh after the gig, we asked him where the inspiration to start using loop effect pedals came from. Our initial suspension was that he may have caught a live set by Howie Day, a true master of building multiple guitar/percussive/vocal loops during solo acoustic gigs (check out this clip of the song "Ghost").

It turned out that Pyke's loop effects inspiration was the musician Magnet from Norway.

"I've never really done it [loops] before," said Pyke, "but I saw Magnet do something with loops. It was very drone based but I liked the way it gave depth.

"In the same way I want to push myself with the band music I want to push myself with the solo stuff," Josh noted as we chatted about how tricky loops can be to set up, as well as how the loop locks the performer into a phrase for the whole song. Nonetheless, it allows for a more dynamic sound and variations to songs that we've heard played the same way many times before. Good stuff.

It was a good night. The venue and crowd were relaxed and friendly. We hope Josh Pyke continues to do these types of gig throughout his career, because it is the type of setting where his unique style shines through best. Josh did promise he would do so, and we'll be holding him to it... 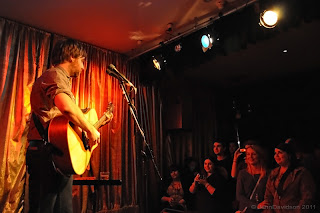 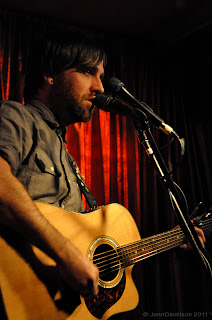 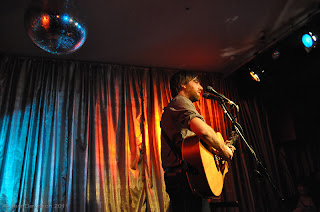 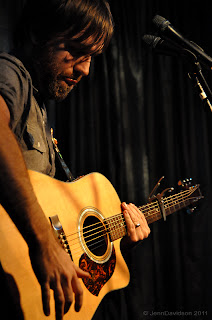 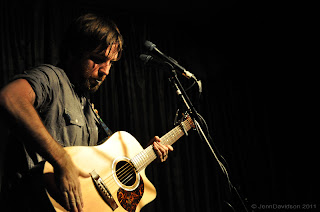 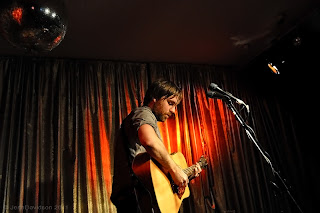 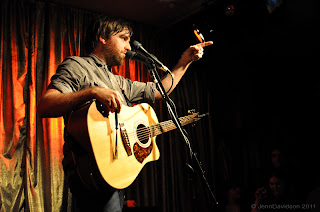 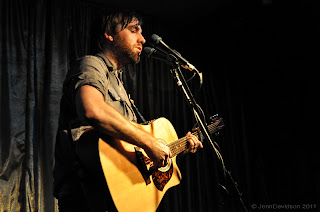