Warning...I have a somewhat blind love for Red Hill Brewery and everything they do, thanks to the lovely, friendly, generous staff of Red Hill and their beautiful microbrewery location. The Mornington Peninsula is an area I have a nostalgic connection to and it makes me want to move there every time I visit. So, it may be hard to properly judge their beers. Therefore, forgive me for any hyperbolic statements in this post.

The Red Hill Brewery Imperial Stout is one of the best beers in Australia. Brewed in May/June for a seasonal winter release each year, it is highly anticipated by many beer connoisseur. Fairly true to style for a Russian Imperial Stout (8% abv), it uses the brewery's own estate grown hops and is an in-house favourite of the brewers. This beer is both worth drinking now and also cellaring for several years. A multiple AIBA medal winner (Gold in 2010 for the 2007 batch and Silver for 2010, 2009, 2008, 2007), this finely crafted beer definitely improves with age. 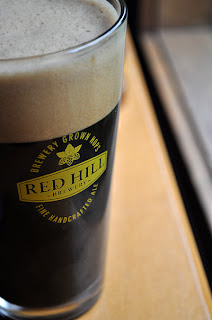 A perfect pint?
Last year was my first experience of a Red Hill Imperial Stout and it was instant love - such a big, flavoursome and warming beer, but also accessible to all drinkers.

This year I have enjoyed this Imperial Stout on several occasions in various forms: 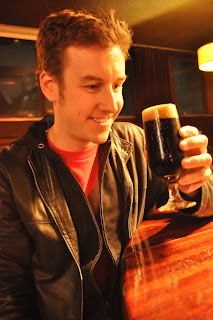 The aroma is of roasted malts, coffee, chocolate and the slightest hoppiness. There is also a faint alcohol kick that warms up your nose. It has everything I want in an imperial stout.

The taste is rich, sweet and smooth. Up front you are hit with dark chocolate, a complex but smooth profile of burnt/roasted malts and some good subtle hop bitterness, yet overall it is predominately sweet! Go deeper and you open up more of a mocha mix with dark fruits and cherries as well as some licorice and caramel.

The big body provides a creamy mouthful. On the handpump at Red Hill Brewery, the low carbonation supported the beer gorgeously, ready to drink from the moment it was poured. On tap here at The Royston it needs to sit and warm for a short while to achieve a similar rewarding mouthfeel.

The beer is warming, for sure. The 8% alcohol is evident but well balanced/suited to the beer.

The cask conditioned handpumped and tap versions left little lacing as my glass was drained, but there is a nice amount of lacing left by the Royston's tap pour. More importantly, the head retention is fantastic. All three ways (handpump, bottle, pub tap) result in a good head all the way to the bottom of the glass.

Drinkability, well...this beer is not "sessionable", but I damn well can drink it non stop! There is no need to drink more than 3 in a session because it is perfectly satisfying with only one or two (...I would classify "sessionable" as 4 or more). The warming alcohol slows your drinking but the quality and balance of the beer makes it very moreish.

This beer excels when cask conditioned and poured from an handpump beer engine. Alternatively, simply poured from the 330ml bottle at room temperature, it is just as good.

Right now I am finding that, when served chilled by a carbonated tap at a pub, you may miss out a little on the true potential of this delicious brew.

Red Hill's Dave Golding said that they were keen to increase the bitterness on this year's version. This was further enhanced by dry hopping the cask conditioned batch that was exclusive to the brewery. The Red Hill Brewery team are super happy with this year's Imperial Stout and desire for everyone to try it as truly intended...from the cask at the brewery bar in Red Hill. 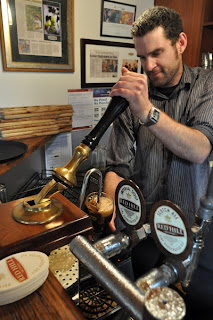 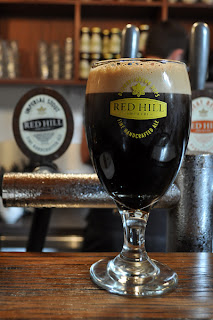