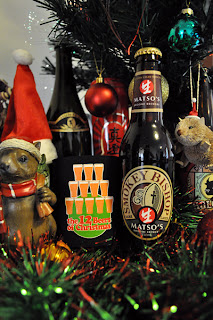 Matso's Broome Brewery is not a big name or prominent brewer here in Victoria, so my fellow locals are likely to only find their beers in specialty beer shops, such as Purvis Beer. However, they have a substantial operation and presence in Western Australia and their beers have won quite a number of awards since 2006.

The Matso's brewery seems to be very much tourism focused, which is perfectly understandable given that tourism drives the Broome economy. As a result, their beer range is fairly unusual, providing a "fun twist" for tourists, with a Mango Beer (Belgium Blonde), Chilli Beer (Wheat Beer), the "Sow's Ear" Vienna Lager and this Smokey Bishop Dark Lager. Obviously, their beers are also brewed for the tropical climate of the region.

The beer-nerd-word on Matso's at this end of the country is very...quiet. There does not seem to be too much praise for them from local craft beer enthusiast, but maybe that is just because their range does not really translate to our cooler and highly variable South-East Australian climate. (And maybe Matso's are just happy doing their thing, bouncing off the tourism dollar...so they do not need to push over to this end of the market.)

I have previously experience their Ginger Beer and it was pretty disappointing, which dampened my enthusiasm to try more from Matso's.

However, feeling a little adventurous and/or complacent in the lead up to Christmas (as well as wanting to include something "different" in this 12 Beers of Xmas blog series), I thought it was about time I gave the Matso's beers an actual crack. Hence for today I have chosen the Smokey Bishop Dark Lager, an AIBA Gold Medal winner in 2006 (draught) and 2008 (bottled).

Poured into a small stein, the Smokey Bishop is a clear brown in appearance and has a generous off-white head that reduces relatively quickly.

The aroma provides nice roasted malt essance and tiny notes of bacon, but little else. On first taste this beer is more like an English Brown Ale than a Dark Lager, with biscuity roasted malt, coffee and some caramel sweetness.

The mouthfeel is soft and light and overall this is really well balanced for a lager. The finish is short and dry, but enough flavour lingers.

The Smokey Bishop is...not bad! It is very drinkable, but lacks complexity and length. I can see it providing some good drinking in the Tropics.

It is certainly worth considering as a gateway beer for non-craft-beer-drinker who are interested in trying an approachable lager alternative. 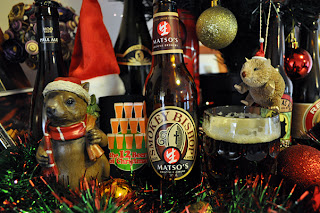 Alt Christmas Song of the day: "How To Make Gravy" by Paul Kelly

Clearly, there is no more appropriate Christmas song for today...

"Hello Dan, it's Joe here, I hope you're keeping well,
It's the 21st of December, now they're ringing the last bell,
If I get good behaviour, I'll be out of here by July,
Won't you kiss my kids on Christmas Day, please don't let 'em cry for me,
I guess the brothers are driving down from Queensland
And Stella's flying in from the coast
They say it's gonna be a hundred degrees, even more maybe,
But that won't stop the roast,
Who's gonna make the gravy now? I bet it won't taste the same!
Just add flour, salt, a little red wine and don't forget a dollop of tomato sauce for sweetness and that extra tang..."
at 8:11 PM